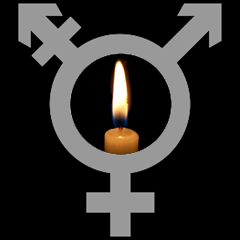 Today marks the fifteenth annual international Transgender Day of Remembrance, when we mourn the loss and honour the lives of murdered trans people the world over.

According to the Trans Murder Monitoring project, 1374 trans people have been murdered in 60 countries worldwide since January 2008, including 238 since last year’s TDoR. However, this figure refers only to reported murders; the real levels are undoubtedly much higher. The full list of murder victims in the past year, including the ways in which they were killed, makes for horrifying reading. It also highlights the disproportionate targeting of trans women, particularly women of colour and sex workers.

Vigils are being held around the country: you can find a list of locations here (not broken down by country, but just search for “United Kingdon”).

As we remember those whose lives have been taken, let us also remember that these were not random acts of violence. The perpetrators are a product of a social system that privileges cis (non-trans) people over trans, a system that is heavily invested in policing gender presentation, roles and identities, a system that is transphobic, racist and sexist to its core.

For every trans person killed, there are thousands more fighting to survive within this system – and its effects are brutal. Of the 889 trans people who responded to the Trans Mental Health Study 2012 – the largest research study of its kind in Europe – 53% have self-harmed, 85% have considered ending their life at some point and 35% have attempted suicide. Nineteen percent have been homeless, 52% have suffered discrimination at work and 81% avoid certain situations due to fear.

We cannot stand by and let this continue. We must each play our part in dismantling the oppressive system that leads to these appalling statistics.

And if you’re a feminist, never forget that transphobia kills. If you’re not fighting it, you’re part of the problem.