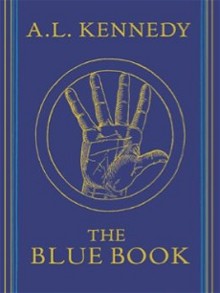 The novel that narrates itself

Picking up the hardcover edition of The Blue Book, AL Kennedy’s latest novel, is an experience in itself. Her latest novel is beautifully produced and bound like a magic book. Then you open the first pages and read the first lines in this, her sixth novel:

“But here this is, the book you’re reading. Obviously.”

This is a novel in which the book itself is a character in its own story. What could be a contrived or distracting technique, but in this case is clever, illuminating and misleading – to explain exactly why would spoil the surprise.

Beth is crossing the Atlantic on a cruise liner sometime in the 21st century with her boyfriend Derek. Unexpectedly while onboard she runs across Arthur: in the past, her and Arthur performed together as mediums and they still meet occasionally to have sex. Beth has given up pretending to connect the living with the spirit world, but Arthur still works as a medium – only taking on clients who are very rich, in an effort to do wrong in the right way.

The claustrophobic setting of being onboard ship, confined with strangers, helps create a sense of urgency and gives Kennedy licence to examine the development of relationships between people and the social norms that control our interactions.

This makes compelling reading, as Kennedy delves into Beth and Arthur’s history to enlighten us as to how they came together and why they separated.

The world of mediums and the techniques and tricks they use are a fascinating subject area and Kennedy makes full use of it. Descriptions create vivid pictures without having to resort to long-winded sentences. I particularly enjoyed descriptions of Arthur working, such as: “Tonight, 750 strangers have watched him convincingly slip onto his blue-white self and then speak through him.”

Is false hope better than no hope?

Death and grief are what this book is about. The stark reality of mediums preying on grieving people is contrasted with the hope they provide. Kennedy raises the question: is fake hope better than no hope? Of course the answer is complicated. The desperation of people seeking out mediums is strongly conveyed. Interwoven into this is the characters’ own sense of grief for things lost.

Drawing characters whose observations are relatable and unforced is difficult; Kennedy does it with ease, although her characters are not always likeable. Kennedy uses the Book to connect directly with the reader, or so we assume: “There are a few past humiliations which, yes – if you ponder them, truly enter in – can still raise a significant sting and that queasy and sticky ridiculousness of you being inappropriately yourself.” The book’s narration taps into a fear that if we were seen for who we really are, without any barriers we too would be unlikeable, even unlovable.

Kennedy’s use of the novel as a sometimes unreliable narrator adds another layer to the mystery and coded love affair between Beth and Arthur. It also connects to the idea of living life the way you should; by following the numbers, by turning the pages. While this is perceived as the “right” way to live or to read a book reality rarely meets this ideal.

Beth and Arthur have developed a coded language while working together to deceive others, simultaneously drawing the reader in and excluding them from this all-consuming relationship. Kennedy delights in twisting language and using it in playful, imaginative ways. This joy comes across in reading the book, and makes you the reader feel that you’re in on the fun. However, there is also the growing feeling that there is more to be revealed. The ending does not disappoint. There is no let-up in the world that Kennedy has imagined for us.

Louise is a law graduate who reads too much and blogs about creative activism at http://