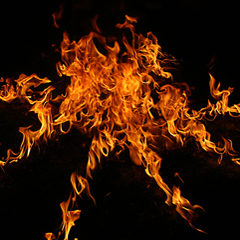 Two closing videos this week: the first is Chimamanda Ngozi Adichie from her 2012 TEDxEuston talk ‘We Should All Be Feminists’. This is the speech which was sampled by Beyonce on ‘***Flawless’. A transcript is available on the YouTube page.

The second video is Lana Wachowski from her 2012 HRC Visibility Award acceptance speech, which was sampled by Burial on ‘Come Down To Us’. A transcript is available at The Hollywood Reporter website.

Image attribution: The image at the head of this post is called winter solstice magical firelit ceremony. It was found at Leo Reynolds’ Flickr photostream. It is used under the terms of the Creative Commons Attribution-NonCommercial-ShareAlike 2.0 Generic license.