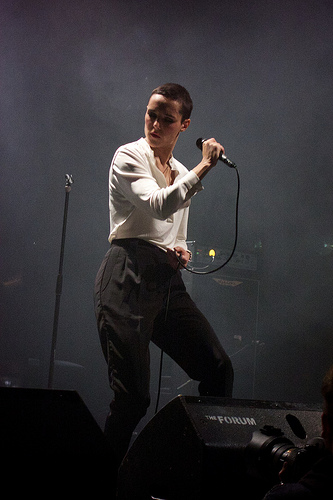 Marta Owczarek sees this Mercury-nominated act live and finds a performance that is full of conviction, with no hesitation and no second-guessing

Savages have been hyped for over a year now, with a line of sold out shows and the super anticipated full-length Silence Yourself, which is getting plenty of appreciation from London record shops (number one at Sister Ray and number two at Rough Trade). The Mercury Prize critics didn’t go with this, but someone clearly did and booked Savages to play The Kentish Town Forum, their biggest show to date. If this is a band who has never played to an audience this big before, they’re either lying or naturals. Their confidence shines brighter than the lights, and those are really something else too.

The Forum is absolutely packed from the very beginning and, for whatever reason, all those guestlisted are sent straight up to the balcony, so crowdsurfing opportunities are extremely limited — jumping off wouldn’t be too bad, height-wise, but not very wise in general as the mixing desk is immediately below. Still, from that elevated perspective, the venue looks particularly huge and theatre-like, with some vaguely Ancient Greek ornamentation. There’s never a big venue gig without technical issues but, here, those are limited to the support slot of A Dead Forest Index, which is unfortunately the opposite of spot-on. But once Savages are on stage, everything goes dark, then light and then awesome.

The stage setup is very minimal — singer Jehnny Beth has guitarist Gemma Thompson to her right, bassist Ayse Hasan to her left and drummer Fay Milton behind her on an elevated platform. All are dressed in black, except Beth who, in a gorgeous androgynous chic combo of white shirt, black trousers and killer heels, already has the visual impact of the spotlight on her: the sharp streak of white against a backdrop of black. This means that, no matter how distracted I am by the amazing lighting, shining from different directions, or the fantastic Thompson, Hasan and Milton — who could each, in turn, easily serve as favourite band members — my eye always comes back to Beth.

Beth is a one-woman-riot, graceful but unpredictable

The show starts with the very distorted ‘I Am Here’ and ‘Shut Up’ and gets noisier and faster. For such a sparse setup, it is hard to take it all in because each band member’s performance is so intense: Milton often looks like she is boxing, not drumming, and stands up a few times, Hasan and Thompson (although quite fixed to their spots) are livelier than most of the crowd and Beth is a one-woman-riot, graceful but unpredictable. She starts singing ‘I Need Something New’ before the instruments kick in, then chases to the front of the stage and waits for the crowd to react; when they yell, she walks further down, kicks and then kneels. Her performance is strong but measured and, in my opinion, she displays more control than some of the punk icons she has been compared to (such as Siouxie Sioux and Ian Curtis).

The same can be said about the whole band. Savages seem to know exactly what they are doing. There is no hesitation, no second-guessing, just a straight-up force of conviction that emanates from their music. In keeping with this, they carve a very serious image for themselves, with their manifestos and requests to not use phones at shows: “WE BELIEVE THE USE OF PHONES TO FILM AND TAKE PICTURES DURING A GIG/PREVENTS ALL OF US FROM TOTALLY IMMERSING OURSELVES/ONLY WHITH FULL EXPERIENCE WILL THE WORDS WE SPEAK BE TRUE.”

They maintain that in a live setting by barely pausing for breath and, from above, it’s hard to see any phones being used.

The tempo mellows slightly with ‘Waiting For A Sign’, which is still noisy but slower, and drowned out. This is followed by a ghost-like intro to ‘Marshal Dear’ and we see Beth playing piano onstage. Surely conscious of the post-punk associations thrown around, they then play a cover of Suicide’s ‘Dream Baby Dream’, during which the lights change and Beth looks so sharp against the stunning brightness, she almost doesn’t seem real anymore. “Thank you so much, you are so loud,” she says, before they descend again into the glorious noise of ‘City’s Full’ and ‘She Will’, with even more energy than before. ‘No Face’ is noisier and angrier still, a fight of a song, and ‘Hit Me’ is sung by Beth actually standing on the audience’s shoulders. She disappears into the crowd while the band plays a stunning extended build up to their biggest hit so far, ‘Husbands’. When she finally climbs back on stage, she sings the song straight to the front rows, staring at them from the barrier. The last song is by no means less intense. This is slow and beautiful, but called ‘Fuckers’, and when it finally hits, it leads to a closing jam that is so spectacular it leaves the audience breathless.

According to their first manifesto, Savages’ intention is to “CREATE A SOUND, INDESTRUCTIBLE, MUSICALLY SOUND, WRITTEN FOR THE STAGE AND DESIGNED WITH ENOUGH NUANCES TO PROVIDE A RANGE OF EMOTIONS”. This is certainly achieved, because they sound great, are captivating and their music is certainly supposed to be played live — the songs we hear at the Forum don’t dramatically differ from studio production and weren’t intended to, either. In the words of their second manifesto, “This album is to be played loud in the foreground.” Whether they really “reveal and reconnect your PHYSICAL and EMOTIONAL self and give you the urge to experience your life differently,” as this proclaims, is not so sure. It is hard these days to find a band that could be your life, at least for more than a hype season. However, Savages’ words definitely ring true when they say “MUSIC CAN STILL BE STRAIGHT TO THE POINT, EFFICIENT AND EXCITING.”

Jehnny Beth stands astride onstage at The Forum, with her left leg slightly raised, holding up the microphone in her right hand. She wears a long-sleeved white top with black baggy trousers and looks down, with a serious expression, over her right shoulder. The stage is filled with dry ice smoke, giving a grey wash to the background. By Paul Hudson, shared under a Creative Commons License.

Marta Owczarek is a writer and activist who cobbles together several survival jobs but continues to create, live and dream. Like the band Savages, she refuses to abandon her life to practical necessities or live it as one of silence, normality and dull conceit. An intelligent and radical person, she does not want to yield to the pressure of accepted practices and age-old servitudes. She wants to tell how she had eaten, how she had slept, how she had important orgasms, [an] important childhood and dreams. She laughs in the face of the advice to keep her mouth shut if she wants to succeed