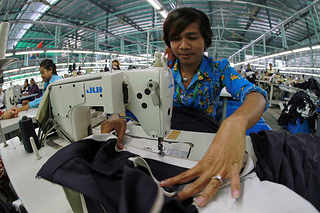 Cambodia police have today opened fire on striking garment workers, who are demanding that their minimum wage be increased to about £97 a month. Three have been killed and more injured.

The clashes took place at Canadia Industrial Park in Phnom Penh, home to dozens of factories that make clothing for western brands that include Adidas, Puma and H&M Hennes & Mauritz.

Human rights group LICADHO described the incident as “horrific” and lambasted military police, adding that their own investigation and surveys of hospitals had found four people were killed and 21 wounded.

“We condemn this appalling use of extreme lethal force by security forces”, the group’s director, Naly Pilorge, said in a statement. “Security forces must now put an immediate end to the use of live ammunition against civilians.”

The garment industry is Cambodia’s largest formal sector employer (World Bank). According to the International Labour Organization, women comprise over 90% of the garment sector labour force in Cambodia:

exclusively by young women with little education from the rural areas. The industry relies on the abundant and relatively cheap availability of women’s labour and their compliance with existing gender norms. Workers report long working hours, lack of leave and low wages. Legal rights are not always enforced, or are considered as continuously negotiable. Some workers also face harassment on the grounds of their sex or social origin, including sexual harassment, as well as unfair practices on the calculation and payment of maternity leave beneﬁts.

The ILO has also found “instances of discrimination on the grounds of maternity and the exercise of trade union activities”.

Image shows workers with sewing machines in a Cambodian factory. Shared under a Creative Commons licence, with thanks to the World Bank Photo Collection.