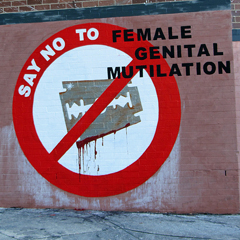 What do 140 million girls and a razor blade have in common?

Today (6 February) is the 10th International Day of Zero Tolerance to Female Genital Mutilation. This is a guest post by Anella Wickenden of ActionAid. We’ll have more on the situation in the UK, and what other groups are doing to combat FGM, later in the day.

This is a guest post by Anella Wickenden of ActionAid on the 10th International Day of Zero Tolerance to Female Genital Mutilation, 6 February 2014. We’ll have more on the situation in the UK, and what other groups are doing to combat FGM, later in the day.

What do 140 million girls and a razor blade have in common?

The answer is female genital mutilation. Up to 140 million girls and women worldwide have been mutilated – that’s twice the population of the UK.

Female genital mutilation isn’t the easiest subject to read or talk about. But that’s one of the reasons why millions of girls around the world are still at risk of having it done. Please spend a few minutes getting armed with the facts. It’s not hopeless, the numbers of girls being mutilated is dropping, and with your help we can #endFGM in our lifetimes.

What is female genital mutilation?

Female genital mutilation involves the partial or total removal of a girl’s external genitals (the clitoris and labia). It is usually carried out using unsterilized razor blades, knives or sharpened stones, without any anaesthetic. The procedure causes extreme pain and a risk of haemorrhage which can lead to death.

In the long term girls face severe pain during urination and intercourse, recurrent bladder infections and possible infertility. In many communities once a girl undergoes female genital mutilation, she is seen as ‘ready for marriage’ and may drop out of school soon afterwards.

In its most extreme form, girls also have their vaginas sewn up, leaving only a small opening for urine and menstrual blood. Girls who are subjected to this form of female genital mutilation face being cut open over and over again for sex and child birth.

Where and why does female genital mutilation happen?

What is ActionAid doing about it?

Theresa Chepution is a widow, mother of nine and a member of the Kongelai Women’s Network in Kenya’s West Pokot region.

Theresa’s experience of female genital mutilation has been traumatic and life-changing. She lost two of her children as a result but recently took 13-year old Janet into her own home after she ran away from her family to escape being cut. 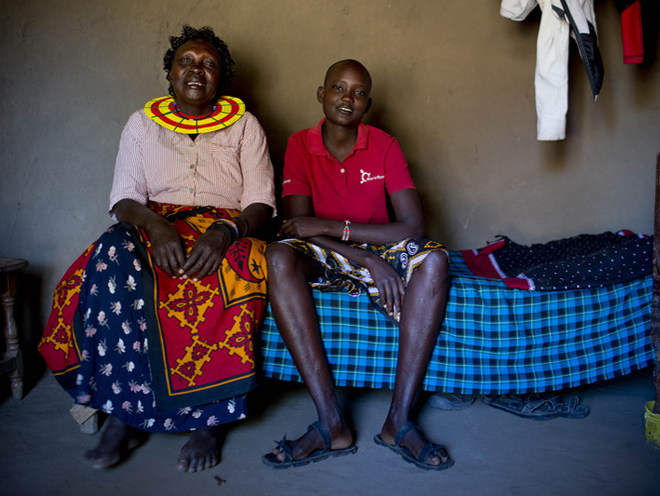 Above: Theresa and Janet. Photo by Kate Holt/Shoot The Earth/ActionAid.

Janet, 13 years old, walked for six days through the Kenyan bush to escape being mutilated. She found hope and a new life through the support of a remarkable women’s network in Kenya’s West Pokot region. 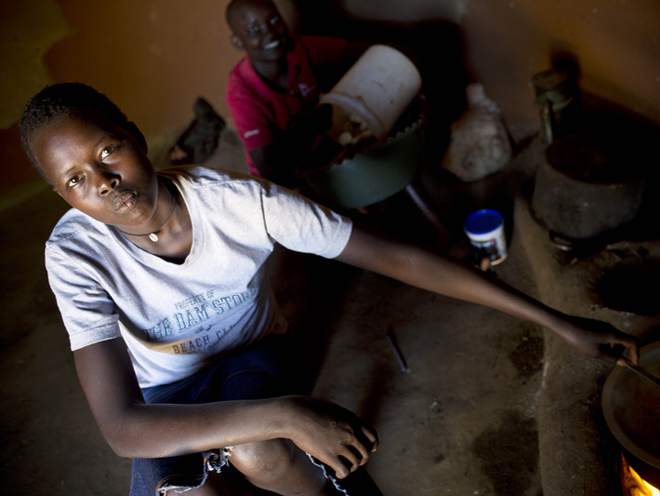 Rosaleen, 16 years old, was subjected to female genital mutilation, but escaped forced marriage after the Kongelai Women’s Network stepped in. She lives in the West Pokot region of Kenya.

The image at the head of this post is a photo of a graffiti which shows an image of a blood-stained razor blade on a white background within a red ‘prohibited’ pictogram (a circle with a diagonal line across it). The words ‘Say no to female genital mutilation’ have been overlaid by the artist. The image is from Newtown Graffiti’s Flickr photostream and has been cropped and resized by Helen in accordance with the Creative Commons Attribution 2.0 Generic license.

The images of Theresa and Janet and Rosaleen appear by kind permission of ActionAid. Photographer’s credits: Kate Holt/Shoot The Earth/ActionAid