Lent begins next Wednesday and for some, either through tradition or religious conviction they will give up something, maybe chocolate or some other such tasty treat. For many however, the eating of pancakes on Shrove Tuesday will be the beginning and end of their thinking about Lent. Probably more because the supermarkets provide enormous displays of plastic lemon and pancake mix than because of any religious conviction about the occasion; the commercialisation of religion rolls on.

“Why are you writing about Lent?” I hear you wonder, “This is a feminist website!”

Well, thoughtful reader, my Lent activity will be rooted around referring to God in the feminine for the entirety of Lent, something I did last year also. It will be an interesting experience, one which will perhaps raise issues about my own indoctrination in the church and having to overcome my own internal barriers about offending people with such a radical statement that God is female as well as male.

For many feminists, talk of religion and feminism as compatible is both anachronistic and oxymoronic. The experience of many women across the world finds religion to have been an oppressive force in their life. The American religious right suggests feminism is at the root of all societal ills and many would argue that religion is a patriarchal construct that has been used for thousands of years to control women and minority groups.

I was raised in a committed Christian home and received various problematic messages about gender and relationships through both implicit and explicit messaging in church. At 17 I met a man who abused me horrifically for four years, culminating in the premature birth of my second child. Feminist thought formed part of my journey to healing. Learning that male violence is rooted in beliefs of ownership and entitlement gave me the knowledge to move forward. Understanding about the global torture and genocide of women and the systems which oppress and devalue women, the industries making money from stealing women’s self-esteem from them and selling it back in the form of beauty products and cosmetic surgery, enabled me to position my story within the story of all of my sisters. Yet it was my Christian faith which sustained me in the darkest moments and enabled me to make it through and find freedom.

I will not look away from the ways in which religion is used to oppress, but neither will I ignore the ways women in science experience misogyny and harrassment or how the UK political system and media denigrates women. Patriarchy uses religion as a weapon just as it uses the media and the sisterhood and women’s own perception of themselves to keep women oppressed.

At times it is hard to hold in tension my deeply held feminist convictions with my deeply held faith. Over the last couple of years it has been wonderful to connect with others who have felt similarly. I have had the honour of meeting with some of the foremothers and the crones who have been fighting the battle while holding onto their faith for many years longer than I have even been on the earth and I have had the wonderful experience of working with some likeminded women in setting up the Christian Feminist Network. We hope to create a space where those who identify as both Christian and feminist can share their passion and feel slightly less out of place.

If you are one of those people, you are really welcome to join us this Saturday (1st March) in Manchester as we run an event called “Reclaiming the F Word” with Dr Kristin Aune and many other speakers. We will be exploring the arts, intersectionality, masculinities, the experiences of trans* feminists and the inclusion of older women in the sisterhood. People of all genders are welcome. You can find out more about the event here: www.fword.eventbrite.co.uk 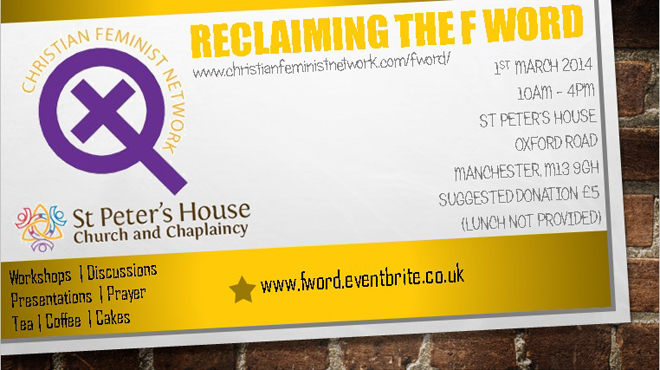 If Manchester is a bit too far north for you, we will also be running an event in Southwark Cathedral on 8th March, before joining with many other women in the Million Women Rise March across London. We will provide the tea and coffee, come along and be part of the conversation and a time to pray for our sisters across the globe. You can find out more about the event here: http://www.eventbrite.co.uk/e/pre-mwr-gathering-tickets-10630318569

As the Christian Feminist Network grows and as feminist thought makes its way throughout society, hopefully more and more people of faith will begin to explore how they can hold both a faith and a feminist view of the world. We would love to hear from those with or without faith about their experiences and stories, do get in touch and we can walk this path together.

Image attribution: Both images accompanying this post were provided by, and are used by permission of, the Christian Feminist Network.