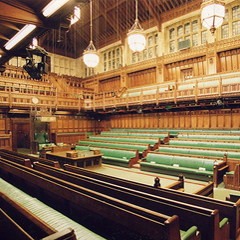 Who runs the world?

Nandini Archer completed an MA in International Human Rights Law at the School of Oriental and African Studies, specialising in women’s rights. She works part-time with International Women’s Initiative as a Research and Media Officer and at Acid Survivors Trust International as a PR Assistant.

Earlier this month, the opposition leader challenged the UK Prime Minister for the Coalition’s all-male front bench in parliament. Indeed, Britain ranks 53rd in the world for its parliamentary representation of women. There is only one woman for every four men in UK parliament. The lack of women’s representation in politics is of course a global phenomenon: despite constituting 51% of the world’s population, women are under-represented in almost all major decision-making bodies. As of July 2013, only 20.9% of national parliamentarians were female, 8 women were Head of State and 13 were Head of Government. Democracies have historically excluded women from being able to vote and whilst (owing to decades of struggle) this is now rare, women’s exclusion from the higher echelons of politics evidently persists.

But why is it so crucial to have women in positions of power? Certainly, we should reject arguments based on gender stereotyping, for example, suggesting that women are inherently peaceful. And it would be wrong to claim that women legislators will necessarily always champion women’s rights. Yet, the reality is that the existing male monopoly of power cannot possess a genuine understanding of women’s issues. This may be one explanation for the perpetuation of inequalities, for instance, the constant threats to reproductive rights, the persisting gender pay gap and the unequal policies regarding parental leave.

There are some positive examples that we can take from around the world. After an increase in female lawmakers in Rwanda and South Africa, new legislation was passed on equal land inheritance and reproductive rights. In West Bengal, villages with greater female representation are twice more likely to have drinking water facilities than villages with low-levels of female representation – since this lessens the burden on women and girls having to walk long distances to collect water. An Inter-Parliamentary Survey concluded that, generally, women policy-makers pursue social issues, physical concerns and development matters – including childcare, equal pay, parental leave, pensions, reproductive rights, physical safety, gender-based violence, poverty alleviation and service delivery. Whilst there will always be exceptions, women can bring forward a different range of matters to represent the diverse concerns of society.

An increase in female political participation would be especially beneficial in the current climate of austerity and public service cuts. Economic decisions made by men at the highest levels are having particularly negative effects on women. Since the end of the recession, women’s unemployment has risen by 12% whilst men’s unemployment has reduced by 7% – and women constitute 65% of the public sector workforce (which is being brutally cut by the UK government). A more gender-equal UK parliament could mean that socioeconomic issues which affect women’s lives are better represented.

One way of redressing this imbalance of power would be to reform parliamentary working culture and hours – since existing norms are premised on politicians being men, without any family responsibilities or life outside politics. Women MPs may be more likely to stand down after one term, owing to the challenges of the patriarchal working environment that has been moulded over generations. However, this argument does present problems by stereotyping women as carers in the private sphere.

The most common policy called for to promote female representation involves some form of quota system. These policies are often condemned as discriminatory against men and there are problems that can arise, for example, when a woman attains a high-ranking role, they may be assumed to have been chosen over a more capable man. The Human Rights Committee noted that these attitudes are entirely mistaken, since quotas seek to redress historic discrimination against women. Rather than viewing women as unworthy of high-powered positions, it would be more reasonable to conceptualise the individuals on Prime Minister Cameron’s front bench as undeserving. Indeed, these men may not have been the most competent, but have been provided with a combination of unfair advantages and connections, owing to their sex, race, class and education.

A more pressing concern regarding women-only quotas is their treatment of women as a homogenous group. It would be of no help to our cause if these quotas were simply filled by more female politicians like Margaret Thatcher or Theresa May – who are unlikely to understand or represent the experiences of a black, working class, single mother, for instance. We need to embrace a more intersectional form of women’s rights – one that recognises the differences between women, including race, class, religion, sexuality, disability and so on. Ultimately, the present monocultural political arena needs to be challenged on all fronts – and quotas can encourage a wider range of people to bring new issues onto the political agenda. We cannot claim to live in a genuine democracy whilst our decision-makers do not represent broader society and we continue to be ruled by an elite group of men.

The image at the head of this post shows the debating chamber of the British House of Commons in the Palace of Westminster, London, looking north-east. The image is from UK Parliament’s Flickr photostream and has been cropped and resized by Helen. The Creative Commons Attribution-NonCommercial-NoDerivs 2.0 Generic license applies.