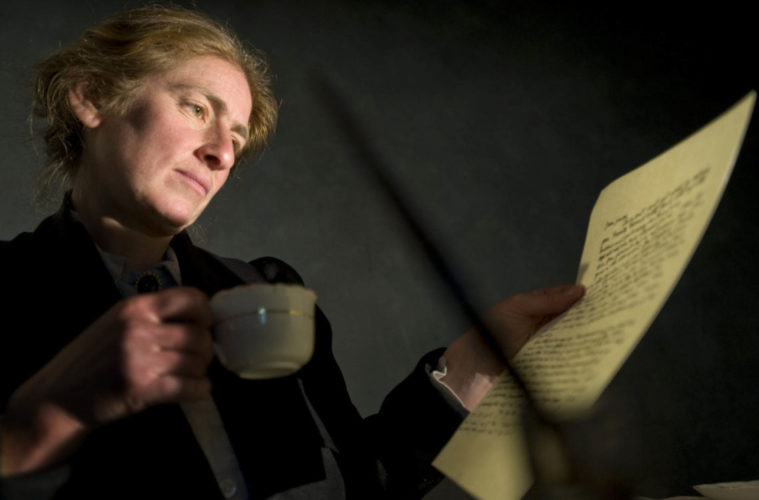 Doing wrong to do right

A one-woman monologue recounting the suffragette movement in prose and song? Jane Duffus is sold 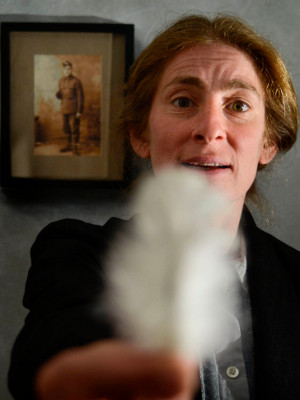 On February 7, 1918, Annie Wilde is sitting in her parlour, musing on the tumultuous events of the past decade or so. The First World War is drawing to a close after four bloody years and Wrong ‘Un‘s protagonist is writing a letter to her solider brother – a handy device to bring us up to date on what she’s been up to.

Told with wit and wisdom, Annie (played fantastically by Ella Harris) recounts her life in several stages. The sad bit is that her frustrations, from those at school (why couldn’t she be picked for the football team?) to those at work in a Lancashire mill (why couldn’t the women have equal pay?), are still echoing in contemporary life almost 100 years later.

While Annie’s journey from the mill to the suffrage frontline is a story that’s been told many times over the past century, it doesn’t lessen the importance and significance of it and we should keep hearing it until we finally have the equal rights that our foremothers started the fight for in the mid-1800s. We should remind ourselves of the women who helped us achieve the equality we’ve strived for for a miserably long time.

Wrong ‘Un was devised after writer (and former Chumbawumba lead guitarist) Boff Whalley’s friend showed him a cache of suffragette memorabilia belonging to her militant grandmother, Freda Graham. Those books, letters and objects led to the writing of this play, lending a beautifully biographical truth to it, although Annie is said to be a fictionalised version of Freda. 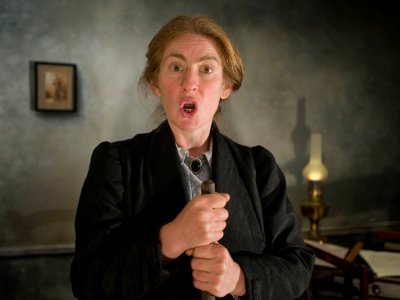 I wonder if Annie Wilde is also based on the most famous suffragette mill girl of them all, Annie Kenney. Kenney was plucked from the working classes by Emmeline and Sylvia Pankhurst to become the only woman from a lower class to join the influential council. She was so trusted by the Pankhursts that she was chosen to lead the South West division of the Women’s Social and Political Union, and was the first of the suffragettes (alongside Sylvia) to be arrested for her militant actions.

Annie Wilde in Wrong ‘Un is also a northern mill lass who, although not selected for the council, decamped to the British capital to carry out militant tactics and endured multiple force feedings. These are described to us in graphic and emotive detail by Annie in a scene where the one-woman monologue really comes into its own.

Annie details how the four nurses and doctors entered her cell, pinned her down, forced tubing up her nose and tipped litres of salted cabbage water through her nostrils into her stomach. Annie recounts how the nurses refused to make eye contact with her, as if to do so would acknowledge that what they were doing was abhorrent. She recalls how the doctor sprinkled perfume around her nose and mouth afterwards as if to make it all better. Annie followed suffragette protocol afterwards by making herself vomit immediately, so as to enforce the rules of the hunger strike.

It’s a powerful scene, made stronger still due to the stark stage set and unfussy delivery by Harris. The pain of the experience is clearly still etched on Annie’s memory years later as she recounts the weeks she endured this torture, day after day. But more than anything, she seems astounded by the inhumanity displayed towards her by the nurses and doctors who administered this process, none of whom could surely have thought that what they were doing was part of their remit to care for and cure the ill.

In reality, only about 40% of women had the vote as a consequence of this Act

Produced by the always interesting Red Ladder Theatre Company, Wrong ‘Un is an educationally important production that reminds us where we came from and where we still have to go. This is a play that is accessible to all sexes and ages and should be watched by anyone who has the chance. It should be remembered that the 1918 Representation of the People Act also entitled working-class men aged 21 or above to vote, a privilege they had previously been denied. It is often forgotten that the campaign for women’s suffrage was typically a campaign for universal suffrage – meaning there was great support for the campaign among working men as well as women, who were all equally disenfranchised.

On February 6, 1918 the Representation of the People Act was passed, purportedly to give women the vote. In reality, only about 40% of women had the vote as a consequence of this Act – women over 30 who owned property, or were married to a man who owned property. It was 1928 before women over 21 would be granted the vote on an equal footing to men.

Jane saw Wrong ‘Un at the Rondo Theatre in Bath on January 31. The show is touring all around the UK and playing a wide variety of venues until 24 May.

The photos, by Tim Smith, are used with permission.

Photo 1: Ella Harris, playing Annie Wilde, looks at a piece of paper with writing on it while holding a cup in the other hand.

Photo 2: Ella Harris, playing Annie Wilde, offers a white feather to the camera. A framed picture of a man in uniform is behind her on the wall.

Photo 3: Ella Harris, as Annie Wilde, face the camera as she talks. A gas lamp and a framed picture are in the background.

Jane Duffus is a supporter of all things suffragetty and firmly believes it is important we never forget the work done by these amazing women. Jane also runs What The Frock! Comedy, which promotes talented female comedians