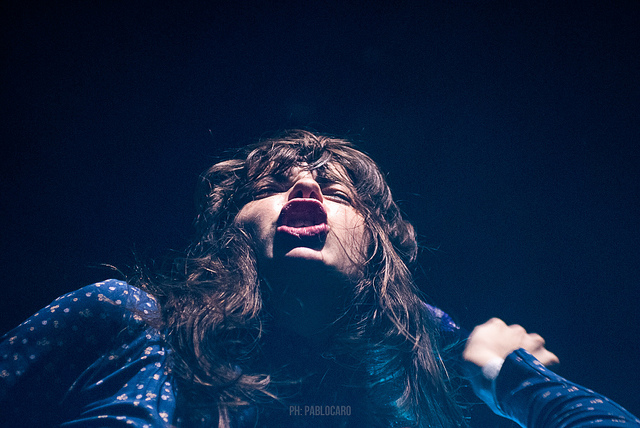 Jess McCabe interviews Teri Gender Bender of Le Butcherettes and Bosnian Rainbows and wonders about the pressures of creating an explosive onstage persona.

A short introduction to Mexico’s riot-grrrl-in-chief, Teresa Suárez: She’s the lead singer of Mexican punk duo Le Butcherettes, the band she launched with her best friend, aged only 17. On-stage antics include fake blood, flour, eggs and a real pig’s head. Teresa – or, to use her stage name, Teri Gender Bender – and Auryn Jolene have been known to take the stage in 1950s dress, combined with a bloody apron.

If Le Butcherettes look as if they were inspired by 1990s riot grrl, that’s because they were. Listening to Bikini Kill and L7 inspired Suárez to found the group, her first band, when she was still in school in Guadalajara. The resemblance doesn’t stop with visuals, as Le Butcherettes dig deep with choppy guitars, a DIY feel and feminist lyrics. As Miss Selfridge dredges through its archives to sell another round of red velvet dresses and plaid shirts to a new generation, it’s a relief to imagine for a minute that Bikini-Kill-flavoured-garage bands like Le Butcherettes could make a second coming.

At 24, Suarez hasn’t abandoned Le Butcherettes but she has a new project: singing in a new band, Bosnian Rainbows, with two alumni of The Mars Volta: Omar Rodríguez-López (who was instrumental in propelling Le Butcherettes into global success in the late 2000s), Deantoni Parks and keyboardist, Nicci Kasper. (The name is a metaphor, she explains. “The point is that everything has its beauty. That’s why the rainbow, it’s the future. So Bosnian Rainbows’ something with the future. Something seen with negativity that really is something beautiful”)…

Upwards head and shoulders close-up of Teresa Suárez performing onstage with Bosnian Rainbows at Groove in Buenos Aries, Argentina, in November 2013. Her teeth are clenched and her lips are pouting outwards into a snarl, suggesting she is mid-flow in vocal delivery. Her eyes are closed. By Pablo Caro, shared under a Creative Commons License.