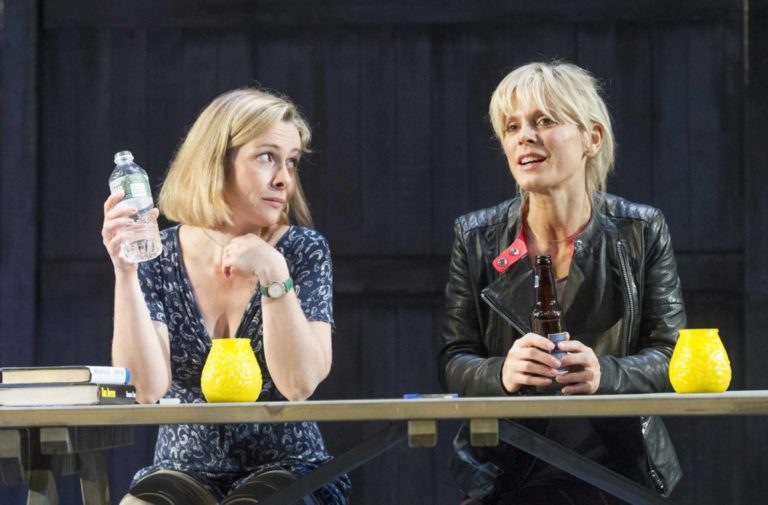 In opposition to the Equal Rights Amendment (ERA) in the US, Phyllis Schlafly organised the STOP ERA campaign, STOP standing for Stop Taking Our Privileges. She argued that women benefited from gendered privileges and a bill like the ERA “would lead to women being drafted by the military and to public unisex bathrooms.”

Schlafly’s campaign and anti-feminism is one of the areas discussed in Rapture, Blister, Burn. Most emphasis is placed on her denial that women can “have it all” (somewhat ironic considering her busy career and family commitments). Reviewer Imogen O’Sullivan sets the scene:

The piece opens in a New England suburban town, complete with picket fences and backyard barbeques. We witness the uncomfortable reunion of three university friends – the sharp and sexy Catherine (Emilia Fox), who is now a renowned scholar of feminism and pornography dubbed “the hot Doomsday chick”, the worn-down Gwen (Emma Fielding), who exchanged intellectual stimulation for a husband and kids, and the hapless, useless Don (Adam James), Catherine’s ex-boyfriend ‘stolen’ by Gwen, who is now married to him. Gionfriddo’s script centres around the much-debated premise of ‘having it all’: Gwen resents Catherine’s freedom, success and ambition, while Catherine fears she will end up alone, without home or family after her beloved mother (Polly Adams) dies.