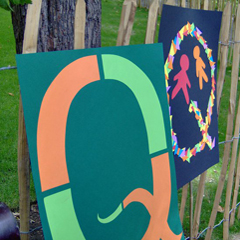 Peace, war and defence – all are feminist issues

This is a guest post by Jessica Metheringham, who has worked as a parliamentary researcher, for the Electoral Commission and with local councils. She is responsible for political engagement for Quakers in Britain, where she works on issues around peace, poverty, equality, economics and campaigning.

There is a long and wonderful traditional of women taking part in peace camps. The women’s peace camp on Greenham Common, set up in 1981 by the group Women for Life on Earth, explicitly stated “we fear for the future of all our children and for the future of the living world which is the basis of all life”. The protesters highlighted their gender as a means of challenging assumptions that women should be at home.

This tradition is carried on by the Aldermaston Women’s Camp, by projects such as Wool Against Weapons, and by campaigners with Action AWE – to name but a few of the groups involved with peace work in the UK. Like the Greenham Common Peace Camp, these groups focus on the nuclear weapons built at the Atomic Weapons Establishment (AWE) facilities in Burghfield and Aldermaston. Campaign group Action AWE, where the “E” stands for “Eradication” rather than “Establishment”, is specifically working to increase public opposition to nuclear weapons by raising public awareness.

Nuclear weapons are as much an issue now as they were in the 1980s, yet awareness has faded. In 2016 the Government will decide whether or not to renew Trident, the submarines which carry our nuclear weapons. This presents a golden window of opportunity in which to raise the issue and encourage debate – waiting until after the election will be too late.

Nuclear deterrents make the world more dangerous and no one safer. These are weapons of mass destruction, weapons which cannot possibly differentiate between soldiers and civilians. If the threat is terrorism, how can these types of weapons help us retaliate against an enemy which moves from country to country, hides amount civilians and uses technology to outsmart us? If the threat is other nation states, the media and diplomacy are far more effective deterrents than such weapons can ever be.

What does prevent countries from attacking one another is communication and mutual interest. Nation states don’t attack other states they trade with, or where they have close cultural ties. Building those links builds our national security. Furthermore, diplomacy and trade benefits the economy in a way that Trident cannot. In the face of cuts to the NHS, to education, to welfare, it is surely madness to spend money on a set of weapons which we all hope we would never need to use.

We hang on the notion of big weapons because they offer us comfort. Trident is a child’s security blanket and the protection it offers is psychological. As a nation, we should act like adults and take responsibility for our national security through open and honest diplomacy. We may feel naked and vulnerable, but the truth is we’ll be safer than we were before.

Just as peace is a feminist issue, so is war. So too are the measures nation states take to defend themselves. Defence is one of the main areas marked off by society as being masculine and for men. Carme Chacón, Spain’s first and only female Minister of Defence, was seven months pregnant when she was appointed to the role – a fact that attracted considerable interest from an incredulous press. The UK has never had a female Secretary of State for Defence. Until Conservative Anna Soubry was appointed to the relatively junior position of Parliamentary Under Secretary of State for Personnel, Welfare and Veterans, no female MP had held a position in the Ministry of Defence. In such an overwhelmingly male-dominated world, simply having an opinion on the defence budget is making a feminist statement.

War affects women no less than men, and often more so. In many cases, it is civilians who cannot flee the conflict zone who bear the brunt of the force. Those are more likely to be the elderly, the sick, the very young – and all those who care for them, which often means women. Research from Amnesty and Medecins Sans Frontieres, among others, demonstrates the horrific level to which rape is used as a weapon of war to damage individuals and subjugate whole communities.

Building peace is a feminist concern because it is about challenging the established hierarchy of traditional power. Peace is about long-term sustainability and cooperation, while conflict divides us and fragments us and keeps us in fear. Peace is more than the absence of violence and is a positive goal in itself. Conflict has its roots in oppression and the unequal distribution of power: the seeds of war are the same as the seeds of patriarchy.

Image attributions: The image at the head of this post is called Pride 2 2011 and was provided by Jessica Metheringham. It is © Britain Yearly Meeting and is used with permission.