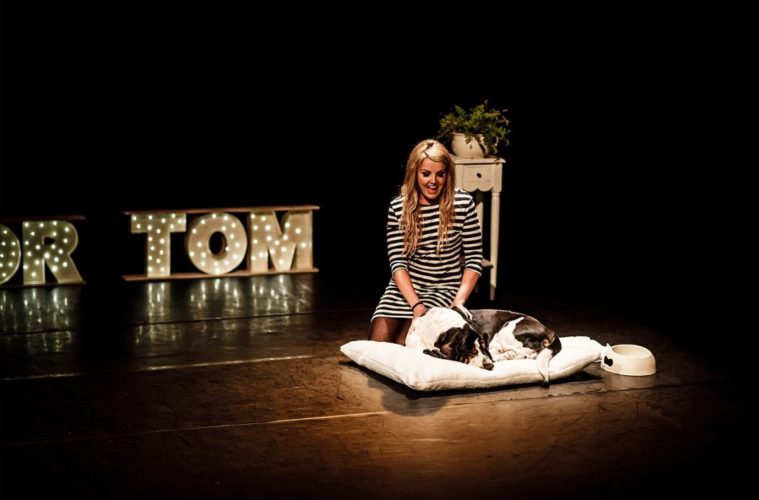 Crufts versus the beauty pageant

How are beauty pageants like Crufts? Pamela Edwardes thinks that Major Tom provides a compelling comparison

Major Tom is a basset hound who is well-padded, sleek and amiably dozy. When performance artist Victoria Melody shakes his show collar, Major Tom trips about with his tail held high. The first quarter of satirical show Major Tom is based on the true story of Melody’s prize-junkie ambition to transform her pet into a show dog.

But what begins as an odyssey of canine ambition with echoes of My Dog Tulip suddenly takes a more interesting turn. Major Tom faces bitter disappointments in the show ring. Melody begins to feel guilty. At last, outraged by a judge’s recommendation that she dump Major Tom and find a new dog, Melody resolves to face up to the horror of his life. She embarks on her own bruising personal journey to become Mrs Brighton, who “must be over 23, British, and married to a genetically-born man”(as expressed in Mrs World UK’s eligibility criteria).

Melody’s background is in fine art. Her approach to the beauty contest world is less theatrical than anthropological. She went to live among the people she was studying. An investigative performance, she posed as an eager contestant. She shared the experience of the women who give up every free minute of their lives to the rigours of good grooming. The report she brings back, illustrated by grainy home-movie documentary footage, is a one-woman lecture entertainingly delivered with Major Tom at her side.

Like Major Tom, Melody submits to the ministrations of a bevy of professionals- hairdressers, beauticians, personal trainers and couturiers, only drawing the line at plastic surgery. The complicity of women is harpooned with skill. As women at the couturiers oooh and aaah at her appearance in a series of fish-tail gowns and persuade her to fork out £500 for a hideous dress, she remains alert to their part in her initiation into this netherworld. A letter giving guidelines from the board of Mrs World UK (the pageant that decides the UK’s competitor in the international competition Mrs World) is read out in a husky male voice. The voice decrees that in the category “showing your personality through clothes”, an above-the-knee dress must be worn. The letter is signed off by a woman.

Her gentle satire is kinder, not at all pious and will possibly engage more of the people who don’t think these issues matter 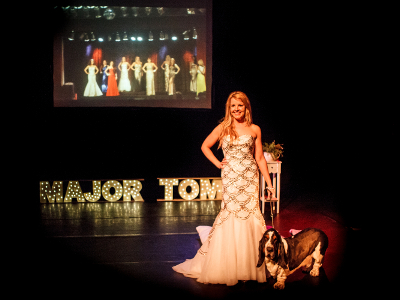 Although Melody wins the title of Mrs Brighton, her ambition to represent the UK is thwarted at the regional finals. Here she describes the event without criticism of the other women except for one who is standoffish. She recounts how unsettling it is to parade before judges who eyeball her body critically at vagina height. For us, a knowing audience, it is a pleasing irony that she carries off the awards for most public appearances and best smile for a cheerful rictus we know hides her horror at the adventure she has embarked on. All the while, her story is paralleled by video clips of Major Tom’s continuing attempts to crack Crufts. The similarities are succinct and telling.

Melody honestly records the positives: appearing in public as a more polished object, people are more courteous to her; she is fitter; and ends up doing good work as Mrs Brighton. However, she also highlights the negatives such as hours spent on grooming, every day in the gym, a husband yearning for a return to normal life and vanity.

Beauty contests are hardly new territory for satirical film and theatre. Melody avoids the pitfalls of many other satirical shows in which, all too often, working-class women are held up as vulgar dupes of the fashion industry and their pursuit of the cheap end of glamour pilloried. That type of confident lampooning ignores the fact that the majority of women continue to buy make up, read catwalk magazines and spend their hard-earned wages on this season’s must-have. For every Mary Beard who doesn’t care to waste time on this stuff, there is a Rebecca West who did.

The campaigns against stereotyping female and now male beauty, stick thin models and the sexualisation of young girls’ clothing will achieve more than Major Tom. Other performance artists, particularly in the US, have not baulked at using plastic surgery to expose the pain caused by the stereotyping of the female body and the commodification of women. Their work is more devastating to watch but, like the Finnish artist Pilvi Takala, who also immerses herself in a world and brings back a report in grainy footage, Melody exposes the bars of the cage and negotiates the space we are trapped in. Her gentle satire is kinder, not at all pious and will possibly engage more of the people who don’t think these issues matter.

As Major Tom leaves the stage, he puts his tail up high and trips out lightly. The mark of his years of show-dog training is imprinted on his gait. Melody delivers her lecture in a simple dress, her hair dyed but showing its roots. Even so, one wonders how long it will take this brave investigator to free herself from the mental prism of the beauty queen.

Photo 1: Victoria Melody kneels by her basset hound, who is lying on a white cushion with a white water or food bowl by him. Behind them is a small white stand with a pot plant on it and the letters “R TOM”, presumably part of the words “MAJOR TOM” spelt out in lights across the stage.

Photo 2: Victoria Melody stands at the front of the stage wearing a long white formal gown, holding a basset hound on a lead. Behind her, the words “MAJOR TOM” are spelt out in lights. There is also a projection at the back of the stage that appears to show a line of women performing at a beauty pageant.