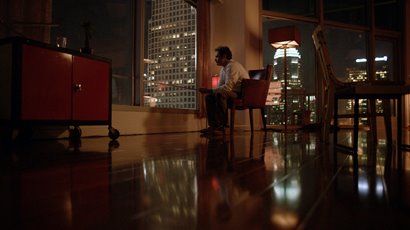 As Spike Jonze’s last offering Her wins The Best Original Screenplay at the Oscars and the critics generally love it (with 94% “Fresh” rating on Rotten Tomatoes), The F-Word’s new contributor Lily Kendall looks closer at how much of her Her actually contains:

“The fact that Samantha doesn’t exist beyond or outside of Theodore’s character is emphasised by the fact that, by her very nature, we only see her filtered through her interactions with him. She can never be an autonomous being and gets no screen time that doesn’t involve him. We get no real sense of her as a person outside of their relationship (apart from some vague references to her “OS friends”). The result is an oddly flat, passionless film. Imagine watching someone talk on the telephone for two hours and you’re part way to imagining how difficult it is to create real tension and drama on screen”

The photo is from the film’s official Facebook page and may be subject to copyright. It shows Joaquin Phoenix as Theodore, looking out of the window of his spacious flat, sitting in the dark with city lights reflected on the polished floor.