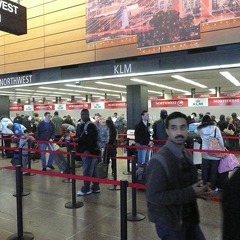 This is a guest post by Sarah Rose LaPham. Her background is in political lobbying and women’s rights advocacy. She currently works on campaigns and public affairs for Maternity Action, working to end inequalities against pregnant women and new mothers.

Like most western countries, the United Kingdom has a long history of blaming immigrants for a whole host of social and economic problems, from job shortages, to levels of crime, to the housing crisis, to benefits fraud. Recent discussions have focused on immigrants’ impact on the NHS, so-called ‘health tourism’, whereby they point a finger squarely at pregnant women intent on accessing maternity services free of charge. Yes that’s right: vulnerable pregnant migrant women, including refugees and asylum seekers, women who have been raped and trafficked here, women who are destitute and homeless and are carrying a child. These are among the individuals that the UK government has chosen to focus on and single out as a particular burden to the NHS in the Immigration Bill.

Reforms set out in the Bill, currently in the House of Lords, are designed to address this health tourism ‘epidemic’ and are part of a broader programme of changes to migrants’ access to NHS services. The legislation proposes to extend charging to more NHS services and to a wider group of migrants. Accident and Emergency services, primary care and pharmaceuticals will be charged for. The Bill also introduces a ‘migrant levy’ on visa applications, whereby the many thousands of migrants who have a current visa but don’t yet have indefinite leave to remain will be asked to pay or will face up-front charges for care.

However, we already have complex and confusing charging rules for maternity care, which are poorly understood by migrant women, and poorly implemented by trusts and NHS staff. Government research suggests that NHS trusts incorrectly classify as many as 30% of the people assessed and therefore charged people entitled to free care.

Furthermore, charges at the point of care create additional and unnecessary health risks that women, due to fear of a large health bill, will choose not to see a midwife throughout their pregnancy or may even avoid hospitals altogether and try to have their baby at home. For those that do see a midwife, many only see a midwife very late in pregnancy, or try to see a midwife only to be denied access to care because of their inability to pay. This can prevent midwives from identifying and treating health conditions early in pregnancy such as, HIV, Hepatitis, Rubella and Syphilis – leading to significantly worse health outcomes for vulnerable migrant women and their babies, as well as complex, costly interventions at a later date.

And these reforms are all in the name of ‘health tourism’, we keep hearing. Shadow Health Secretary Liam Fox coined the term and posted a warning on the Conservative Party website in January 2003, of ‘the impact that the asylum seeker crisis is having on the NHS’. Fox went on to claim asylum seekers shouldn’t get preferential treatment ahead of UK taxpayers and that is was not the responsibility of the NHS to act as a ‘health tourism destination for economic migrants’. This theme was expanded upon until health tourism quickly became a euphemism for abuse of the NHS, to which all foreigners could be contributing. Yet the government unreservedly admitted that it had not collected data on the numbers of ‘health tourists’ who actually used the NHS. (Sabates-Wheeler and Feldman, 2011)

The fact is there is no credible evidence to back up claims that migrant pregnant women are part of an epidemic of ‘deliberate maternity health tourism’. However despite the lack of formally collected data or studies, misinformation and propaganda have given momentum and justification to these reforms and have taken a front seat in likes of papers such as the Telegraph and the Daily Mail, who have been all too keen to report pregnant women ‘cheating’ their way into the country to receive free maternity care. The claims of one doctor at Guy’s and St Thomas’ Hospital who referred to the flow of West African women flying in to give birth as the ‘Lagos Shuttle’, which the hospital publicly denied, has been reported on countless times as if it were based in fact, instead of one individual’s opinion and assumptions about immigration status and country of origin.

The UK claims to be family-friendly, to be advancing and championing the rights of women, to welcome diversity and ethnicity into its borders, yet actions speak much louder than words. This legislation will infringe upon a woman’s human right to maternity care, will send a clear message to migrants and their families that they are not welcome here and thus unworthy to receive our healthcare. It will also ultimately discriminate against one of the most vulnerable groups in our society, pregnant migrant women. We will not stand by while the Government masks discriminatory and anti-immigrant policies as large-scale economic problems that simply do not appear to exist.

To find out more about Maternity Action’s campaign against these reforms go to: http://www.maternityaction.org.uk/wp/policy-campaigns/campaigns/access-to-nhs-maternity-care-for-vulnerable-migrant-women/

Image attribution and description: The photo at the head of this post is called ‘The line I’m not in’ and it shows a queue of people at an airport check-in. The image is from Mark Atwood’s Flickr photostream and has been cropped and resized by Helen. The Creative Commons Attribution-NonCommercial 2.0 Generic license applies.