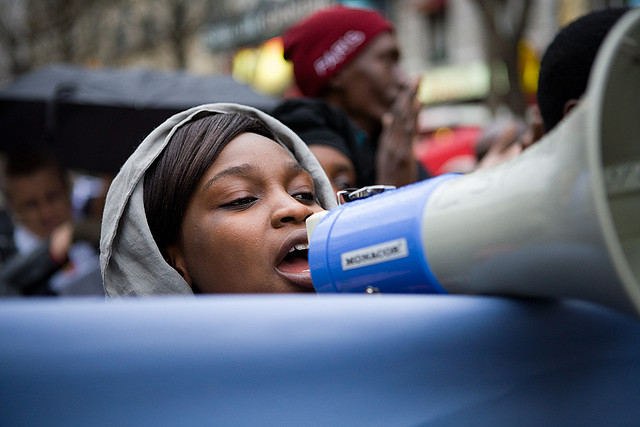 Feminism and the expectation of martyrdom

Jan Dark on the challenge of overcoming female social conditioning and standing up to abuse from not just men, but other women.

Since time immemorial, women have been taught that male violence and abuse are inevitable; we are expected to learn to either avoid it or live with it. Male violence against women and girls is so normalised that decades on from the beginning of the second wave, feminists’ voices are still not being heard. When our voices are heard, rather than being listened to, we experience a backlash.

The first ‘speak out session’ within the anti-rape movement in the USA took place in New York in January 1971. Over 300 women attended and at least 30 courageously spoke of their experiences of male sexual violence in front of a mixed audience. Some were subjected to verbal and physical abuse from the men present (including being urinated on) when they disclosed. Not surprisingly, a consequence was the recognition for the need for women-only spaces. How much has changed? Very little. Fast forward to the digital age and the abuse also happens online. What has changed is that is our women-only spaces and services are constantly under threat from male intrusion.

I used to run a spoof Twitter account that ran alongside the BBC Question Time programme and I found that I received a lot more online abuse when the account was posing as a woman than when it was posing as a man. It was wearing. And it renewed my admiration for women who take part in public life via Twitter.

The abuse of women on social media is well documented. One of the most high profile cases of online abuse is that experienced by Caroline Criado-Perez in 2013, following her successful campaign for female representation on a banknote. Reporting her abusers to the police resulted in two prosecutions in January 2014; one was that of a woman. I saw tweets from Caroline’s detractors accusing her of being a traitor to feminism because she had availed herself of the law and one of the accused was a woman. Since when does being a feminist preclude abusive women from being held accountable for their actions?

There is such pressure on feminist activists to not only be infallible and perfect in every possible way, but to be martyrs for the cause. Don’t get me wrong, I love and admire Emily Wilding Davison hugely and whether or not she intentionally threw herself under a horse is a much debated issue (personally, I don’t think that she did). However, I am not a martyr, I am a feminist, and the two don’t have to go hand in hand.

Some may argue that this burden of martyrdom is self-imposed, but that ‘self-imposition’ is the result of patriarchal social conditioning. Sugar and spice and all things nice, the rhyme goes. We are taught to placate, to smile and be nice, even in the face of nastiness. What could be a more powerful tool for ensuring that women as a class remain subjugated and oppressed? Bringing us up with the tools to challenge would pose a threat to the status quo.

Many of us devote our energies to doing all we can to help women, but there comes a point when it cannot be to the detriment of ourselves. Many of us love the sisterhood, we love women-only spaces, we fight to retain women-only services, however… if we challenge abusive behaviour towards us from other women, some accuse us of being unsisterly or even anti-feminist. I have known one or two women (mercifully, only a tiny number) who actually exploit one’s feminist values to behave in a most inappropriate manner.

A few years ago, I had cause to report a woman’s actions to the police. I agonised about doing this for some time as it really pricked my feminist conscience, however, her behaviour was unacceptable and caused a great deal of stress, distress and harm to many women. Being a feminist does not mean that we’re so inured to abuse that we can ignore it. Nor does challenging such behaviour negate our empathy.

Prior to this, I had also faced a moral dilemma regarding a friend who was in a very dangerous situation. I tried to support her as best as I could and in the process, allowed myself to get so involved that I endangered my family and myself. Unfortunately, she also misdirected her understandable anger in my direction numerous times. I endured it. I tried to talk to her about it. However, her outbursts increased in frequency. I had to walk away for my own emotional well-being and safety in the end. Guilty? Yes I felt guilty on both counts. Why? Because this is part of the female condition.

Much has been talked about Desmond Tutu’s forgiveness recently. It’s time that we, as feminists, learned to forgive ourselves.

Photo of a Black woman shouting into a megaphone by looking4poetry, shared under a Creative Commons licence.