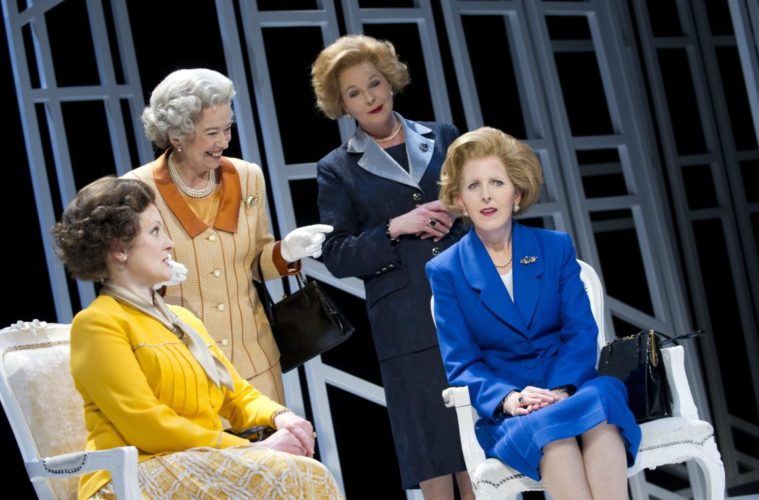 Maggie and the monarch

New play Handbagged, about the two of the most prominent British women of the 1980s, was written and directed by women and boasts a majority woman cast. Lissy Lovett finds it to be a breath of fresh air

Handbagged started life as a short play written for the Tricycle Theatre’s Women, Power and Politics season in 2010. Later developed into a full length play that was staged at the Tricycle, it’s now transferred to the Vaudeville Theatre, where it will play until the beginning of August. It’s a very women-led piece, with writer Moira Buffini, director Indhu Rubasingham and four women in the cast of six. The play centres on the weekly private audiences held between Queen Elizabeth and Margaret Thatcher during Thatcher’s tenure as prime minister.

There are many plays which would be equally good produced as films or television programmes, but it’s hard to see that working with this production; there is no doubt that this is a piece of theatre. The cast break the fourth wall and speak directly to the audience right from the start and refer frequently to the fact that they are within a play. This includes discussions about whether or not to have an interval (Thatcher is against, the Queen in favour, with the Queen winning the day) and a brief mention of the closed shop unions which are much missed by many members of the actors’ union Equity.

The play makes brilliant use of doubling with Marion Bailey playing an older Queen, Lucy Robinson playing a younger Queen, Stella Gonet playing an older Thatcher and Fenella Woolgar playing a younger Thatcher. All four lead women interact with each other. No one really knows what was spoken between the two real women during their meetings, and this trick of casting means that a character can disagree with herself about what actually happened, giving a sense of ambiguity that reflects real life. 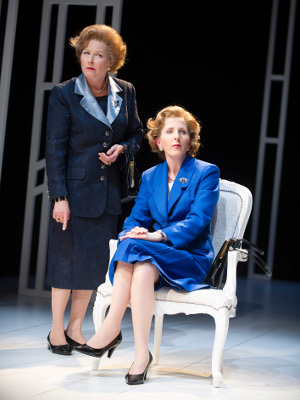 In contrast, the two male actors, Neet Mohan and Jeff Rawle, get the opportunity to play absolutely everyone else from Ronald Reagan to Neil Kinnock. The men are frequently told that they are only there to support the story of the women, which was an aspect of the play that I really enjoyed. However this does flag up that almost every single person of note in politics and world events during the period 1979-1990 other than the Queen or Thatcher was a man. Thatcher herself promoted vanishingly few women to be part of her cabinet.

I am old enough to remember most of Thatcher’s premiership and many moments of the play brought back my memories of the 1980s, but for those that are too young to remember or just don’t remember them in detail, brief explanations are cleverly woven into the dialogue. So much happened during Thatcher’s office that it’s hard to squeeze it all in. I might have liked more on the Right to Buy policy since it has contributed to today’s high housing costs, but I don’t know what I would have missed out to include it.

Handbagged doesn’t pull any punches but shows both Thatcher and Queen as fully-rounded individuals with strengths and weaknesses and seems to be a fair assessment of a ground-breaking time in UK and world history. Thatcher was the first (and to date only) female Prime Minister of the UK and presided over huge changes in how we live and work. Although I would never describe Thatcher or the Queen as feminists, I have no doubt that for me the fact that the two most powerful people in the country were women during my childhood directly influenced my self-esteem and what I felt I could expect from life. 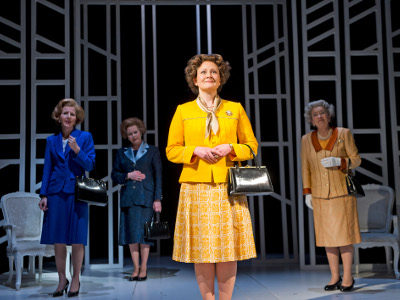 Among the many characters played in Handbagged by Neet Mohan is Nancy Reagan, the wife of Ronald Reagan. Out of the whole play this section is the only part which leaves something of a sour taste in my mouth. It’s a depressing truth that it’s very easy to get a laugh out of a UK audience by getting a man to dress up as a woman and this phenomenon makes me uncomfortable. I expect that it will be a long time before the UK as a whole stops finding a man in a dress amusing, but I’m not sure that this easy laugh is something that should be encouraged. It is completely possible to have cross-gendered casting without the performance descending to the Monty Python Pepperpots levels of high-pitched voices and an inability to walk in heels.

However, apart from this one short section, Handbagged is a very good play. It places two women’s lives front and centre and tells some of the politics of our times in a way that is theatrical, new and interesting. The writing is funny, clever and true and all the actors give brilliant performances. Unfortunately there are currently no accessible performances planned (audio-description, British Sign Language interpreted or captioned), although there have been both audio-described and captioned performances during the play’s run at the Tricycle. For those on a reduced income, Indhu Rubasingham is one of the few directors that thinks about the whole auditorium and not just the expensive seats, so the view from my cheap seat in the Upper Circle is perfectly good, with the cast making sure that the lines are delivered to everyone. I thoroughly recommend going to see this female-led play about two historically significant women before the end of its run in the summer.

Handbagged will be running at the Vaudeville Theatre until 2 August.

Photos are by Tristram Kenton.

Photo 1: The younger versions of the Queen and Thatcher sit in white chairs engaged in conversation. The older versions stand behind them, looking amused.

Photo 2: The younger version of Thatcher sits while the older version stands behind her. They are looking at something out of shot.

Photo 3: The four women characters stand in a line facing the audience. The younger version of the Queen is standing forward and lit, smiling.