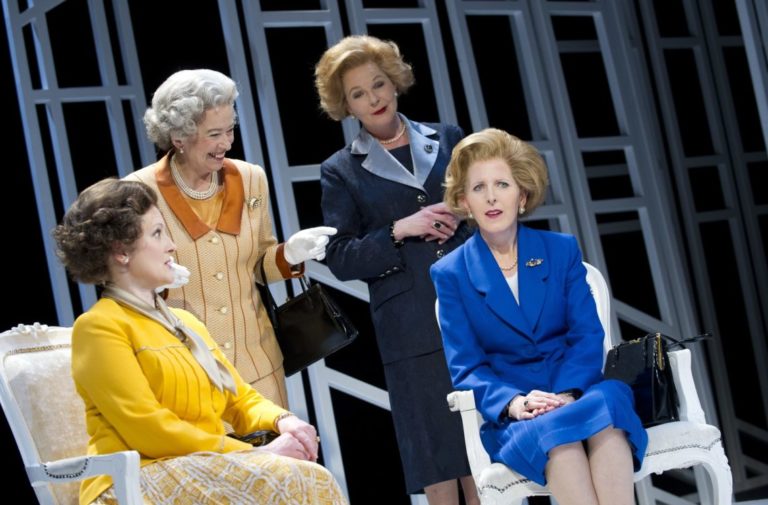 If I search for the phrase “Was Margaret”, Google’s first suggestion to complete the sentence is “…Thatcher a feminist”. It surprises me that there remains much debate about this, considering her own disavowal of the movement. Personally, I think she was pretty clear when she said, “I hate feminism. It is poison.”

Meanwhile, the Queen doesn’t get much scrutiny over her personal views on gender equality. (If anybody’s interested, the top four results when Googling “Is the queen a” are “Is the Queen above the law”, “Is the Queen a lizard”, “Is the Queen allowed to vote” and “Is the Queen a Christian”.) From a feminist perspective, far more thought goes into the monarchical structure rather than the individual beneath the crown.

However, as new play Handbagged explores, these two women are historically significant and the 1980s were a unique time in the UK, with both Prime Minister and monarch being women. The play causes reviewer Lissy Lovett to reflect on the importance of having women on the world stage, even if their actions and identities aren’t feminist (explicitly or otherwise):

Handbagged doesn’t pull any punches but shows both Thatcher and Queen as fully-rounded individuals with strengths and weaknesses and seems to be a fair assessment of a ground-breaking time in UK and world history. Thatcher was the first (and to date only) female Prime Minister of the UK and presided over huge changes in how we live and work. Although I would never describe Thatcher or the Queen as feminists, I have no doubt that for me the fact that the two most powerful people in the country were women during my childhood directly influenced my self-esteem and what I felt I could expect from life.

Click here to read the rest of the review.

Photo by Tristram Kenton. The younger versions of the Queen and Thatcher sit in white chairs engaged in conversation. The older versions stand behind them, looking amused.