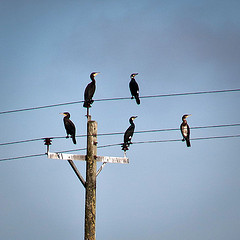 Content note: This post contains links to external websites and blogs, some of which have comment threads and other material which some people may find triggering. The links here are posted in good faith but, as The F-Word has no control over the content of external sites, readers are advised to use their discretion and approach them with due caution.

Image attribution and description: The image at the head of this post is called Fisherman’s Rest. It was found at Mark Robinson’s Flickr photostream and is used under the terms of the Creative Commons Attribution-NonCommercial 2.0 Generic license.

The image is a photo of a weathered timber telegraph pole against a blue sky. The pole supports three cables and there are five seabirds (cormorants?) perched on the wires.