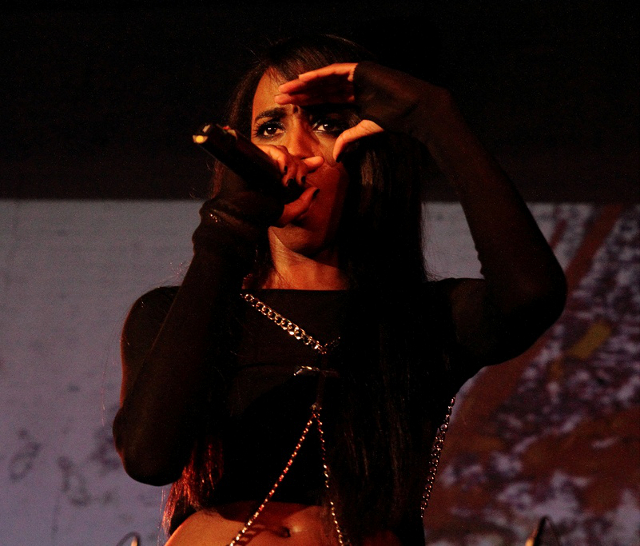 Content note: ‘Cleaning Out my Closet’ (linked to in the first mention of the song) contains a descriptive account of childhood sexual abuse and its impact.

Angel Haze means it. Her most recent album Dirty Gold, which she leaked online in December 2013, much to the consternation of her record label, is a powerful, challenging and emotional melting-pot incorporating hip hop, commercial pop and dance music. The songs featured veer from generic, typical top 40 chart synth-pop to more heartfelt, inspirational and beautiful tracks. I’m a big fan of ‘Deep Sea Diver‘, which definitely falls into the latter category.

Born in Michigan, US, Haze was raised in the Greater Apostolic Faith, which she has described as a cult. In an interview with Radio 4’s Woman’s Hour in February, Haze speaks of having lived in a very restricted environment, where she was not allowed to communicate with people outside of the church, wear trousers or make-up or listen to secular music. Her father shot himself in the stomach, trying to pistol-whip someone in a fight, and died whilst her mother was pregnant with Haze. Haze’s mother met the ‘prophet’ of the church at what Haze describes as “a very vulnerable time in her [mother’s] life”. Haze has spoken frankly about the sexual abuse she endured as a child, reworking Eminem’s song ‘Cleaning Out My Closet‘ into an unflinching and harrowing testimony she recorded once and has never listened to since…

The image is a shot of Angel Haze from the waist up. She wears a black, cropped top, with a chain running round from her neck and down to her midriff. Haze is singing into a microphone; her second hand is raised to her left brow, as if looking into the distance. Image by Phillip Nguyen shared under a Creative Commons Licence.