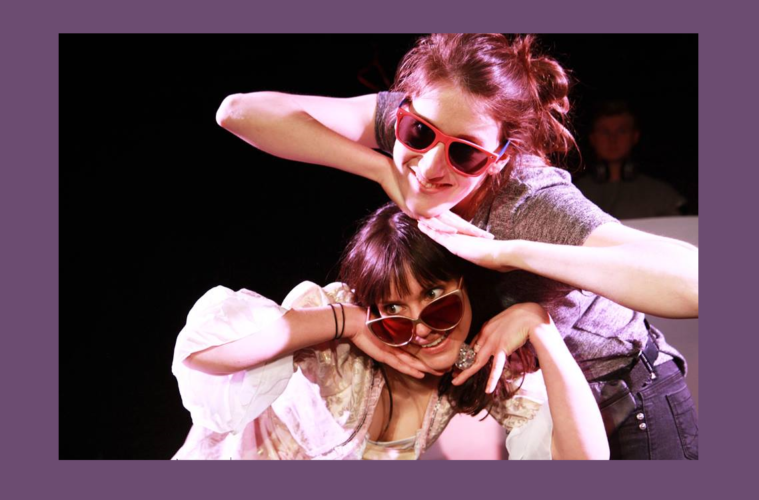 An aversion to a new version

Meshing a contemporary story of foot prostitution with a comedic retelling of the 18th century novel Fanny Hill is an interesting idea. But, concludes Alicia Rodriguez, The Fanny Hill Project v2.0 fails to convince that the two stories have that many parallels 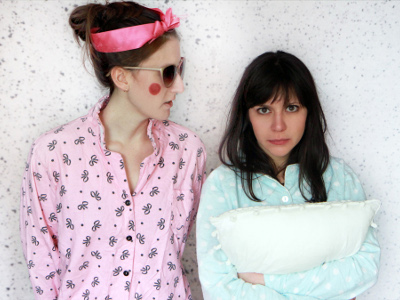 After Tess Seddon graduated from a drama degree and her dad had a classic mid-life crisis, she moved to New York in 2010 to pursue a theatrical career. She quickly realised that her chances of paid work within this industry, particularly for a burgeoning director, were slim. To fund her theatre internship, Seddon got a pedicure and began working nights in a foot-fetish club, letting people touch her feet in return for cash.

Four years later, Seddon is a seasoned playwright and director, and recently founded TheatreState, an exciting live art and theatre collective influenced by the absurdities and banalities of British culture, with Cheryl Gallacher. The pair’s latest production was inspired by those early years of Seddon’s career, after they noticed the similarities between her experiences as a sex worker and em>Fanny Hill or Memoirs of a Woman of Pleasure, a novel by John Cleland published in 1749 and one of the first published works of erotica in the English language.

Seddon and Gallacher have updated the story in the novel The Fanny Hill Project v2.0, a well-intentioned but ultimately baffling retelling of two saucy stories. The combination of Seddon’s confessions with Cleland’s 18th century erotica intrigued me with its ambition and its promises of sharp, satirical humour. But then it left me feeling disappointed.

“It’s a drinking game!” Seddon and Gallacher excitably inform us after a few minutes of whispering suggestively into a microphone. On entering The Camden People’s Theatre, I was handed a plastic cup of lemonade and instructed not to drink it straight away, so naturally my audience-participation-alarm-bells had already started ringing. As a narrative tool, the popular “I have never…” brand of drinking game is not the most effective. Traditionally utilised by self-conscious teenagers to boast about their sexual histories and how much drink they can handle, it seemed like a particularly heavy-handed way to introduce Tess’ story.

If this was meant to be an ironic comment upon some pornographic girl-on-girl trope, it was not made clear enough

“I have never… been a prostitute,” Gallacher proposes, while Seddon takes a long sip and glances knowingly at the audience. So The Fanny Hill Project began. 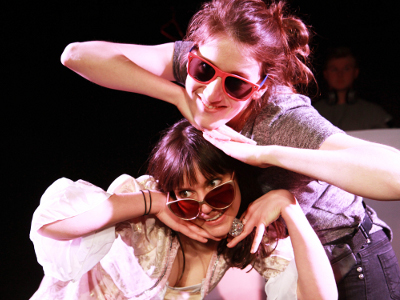 I didn’t hate it and there were parts of the play that worked. Addressing the audience with first person narratives and stepping outside of the play to comment upon the action within, the production employed Brechtian techniques , distancing the audience from the emotional narrative in order to focus on the political message. In addition to this, pantomime aesthetics complete with pop songs and dance routines jolted the story into an unreal and absurd place, adopting an unapologetic and frenetic energy.

While Seddon tells her tale to the audience as a fragmented monologue, Gallacher, as Fanny Hill, paints her face white and bounces around the stage, wide-eyed, reading from a copy of John Cleland’s novel.

Overseen by Jordan Eaton, a mysterious figure behind a DJ booth, each story is interrupted at regular intervals by a short, sharp bell. The bell signals the transition between Fanny and Tess – each resumes their narrative until the next bell ring. This establishes a tension and rivalry between the two characters that results in many altercations. Both Seddon and Gallacher are highly adept at this kind of physical comedy, although like any joke that is repeated too often, watching things being thrown around the stage becomes tiresome after a while.

A somewhat uncomfortable moment was the girl on girl scene, wherein Tess shares a cheeky snog with her housemate, Ten, and Fanny is sexually awakened by Phoebe Ayers. It is unfortunate this was played out as a rebellious episode far from the norm and did little to challenge the often-fetishised representation of lesbianism. The two actors even have a pillow fight to the tune of Katy Perry’s 2008 hit ‘I Kissed a Girl’. If this was meant to be an ironic comment upon some pornographic girl-on-girl trope, it was not made clear enough. 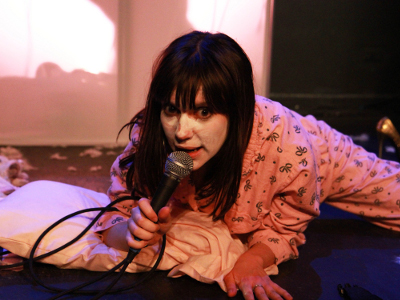 The confessional genre is interesting and Seddon is a good storyteller. She is personable and has the right amount of eye-rolling self-deprecation to be a likeable character.

Unfortunately, her confession only scratches the surface of what has the potential to be a much richer exploration of sex work and its historical representations. This one young woman’s account of her foray into foot-prostitution didn’t challenge or enlighten my perceptions.

Tacked onto the end were allusions to some kind of empowerment, which could have been fascinating if explored further. Perhaps this was an intentional loose end, leaving the audience considering an unanswered question but at this point, despite my eagerness to learn all about Tess and Fanny, the confusing direction and disjointed conclusion stopped me from caring about the story any longer.

Why choose Fanny Hill as the format to mediate one’s own narrative? Apart from a few key similarities, throughout the performance this puzzled me to the point of frustration. Retrospectively however, I see the value in placing this frankly ridiculous work of fiction next to something contemporary and real. Not so much for political relevance, but as an experimental exercise in storytelling and historicisation. It was an ambitious task, and it almost worked.

The Fanny Hill Project v2.0 was a little bit like an old school friend telling you about the zany things that they got up to in their gap year. It is a bit funny, but also smug and forgettable. I wanted to know about the people who spend their lives in the sex industry, the clients, and the culture. The performances from all involved were heartfelt and detailed, but I expected more from such an enticing premise.

The Fanny Hill Project v2.0 is showing in Exeter at the Bike Shed Theatre until 17 May followed by Bradford at the Theatre in the Mill 2-3 July.

Photos are by Helen Murray.

Photo 1: Two young women stand side by side. The one on the left, wearing pink pyjamas, sunglasses and a pink bandanna, is looking at the woman next to her, who is wearing blue pyjamas, hugging a pillow and looking at the camera.

Photo 2 (and the feature image with a border): Two young women pose together, wearing large sunglasses and smiling. One is crouching while the other is resting on her.

Photo 3: A young woman in pink pyjamas lies on the floor, speaking into a microphone.

Alicia writes about art and makes art about telling stories. She currently lives and works in London. She has a twitter @aliciapainting