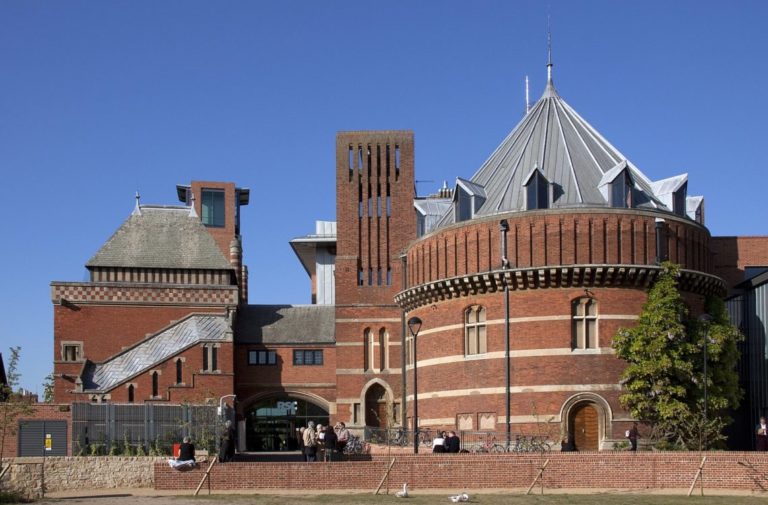 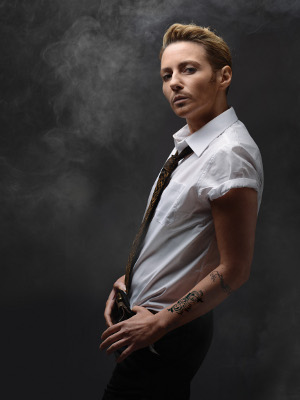 The Royal Shakespeare Company’s rare revival of The Roaring Girl is well worth seeing – not least for its raucous, trouser-wearing, sword-wielding, fearsome and fun female lead.

The term “roaring girl” used to be slang for a young woman who was publicly rowdy, possibly committing small crimes or brawling. Played with brilliantly cool conviction by Lisa Dillon, Moll Cutpurse is the theatrical depiction of a real-life roaring girl, Mary Frith. A few weeks before the work by Jacobean playwrights Thomas Dekker and Thomas Middleton was first performed in 1611, Mary was brought before the church courts, accused of dressing “in the habit of a man”, drinking, smoking and visiting playhouses. Bold, unbound and invading public life, she was easily branded a prostitute and criminal. But in The Roaring Girl, two of her contemporaries cast her in a more heroic and intriguingly modern light.

The plot rotates largely around the handsome Sebastian Wengrave (Joe Bannister), whose father refuses to let him marry Faye Castelow’s equally attractive Mary Fitzallard. In a period where brides are still a commodity, this is predictably enough on account of her small dowry. Here the infamous Moll swaggers in to fake a courtship with Sebastian, showing the old patriarch the value of his son’s original choice.

Moll isn’t victorious at her own cost, however. Her reputation is restored and not by denouncing her past behaviour. Instead, Dekker and Middleton’s comedy upholds a jubilant disregard for patriarchal command and convention, revelling in the freedoms of its metropolitan youth. For example, street-savvy and criminally connected Moll also bobs into a subplot to save the fun-loving libertine, Jack Dapper, whose father even enlists the legal establishment to try to teach him some discipline. 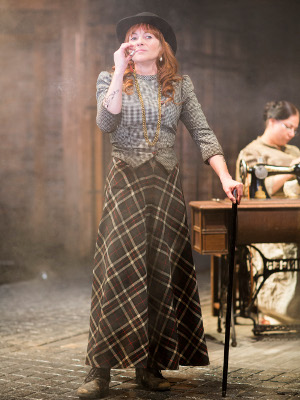 There is certainly something more than escapist merriment to be read in The Roaring Girl, particularly where Moll – both fact and fiction – serves her own challenge to social expectation. “He was in fear his son would marry me,” Moll observes when Sebastian and his father are reconciled, “But never dreamt that I would ne’er agree,” proceeding to reject an institution that would bind her in obedience. Her sexual ambiguity is even more intriguing in this respect.

Alongside safe suggestions of her chastity, there are also hints of sexual liberation. “I scorn to prostitute myself to a man,” she states in one scene, “I that can prostitute a man to me.” Equally, references to the unknown contents of her trousers are plentiful. This no doubt played to the particular humour and fascination of a Jacobean audience (particularly considering she would no doubt have been played by a boy at the time), but it also lends a hint of lesbianism to which the RSC’s production gives a briefly jubilant nod.

The latter may be a hopeful reading of a modern mind but the play and the RSC’s production make this possibility totally believable, providing a novel female character who is, above all else, a spirit of raging life and defiant freedom. As she herself puts it in the play, “I please myself and care not else who loves me.” Lisa Dillon embodies this brilliantly, and is supported by a bountiful energy injected into the whole production by the director, Jo Davies. The cast are constantly on the move: up and down the set’s iron stairs, pacing about the circular stage and blasting out some atmospheric jazz.

This direction does justice to The Roaring Girl‘s carnival spirit. However, additions such as modern music also distance the play further from the period that informs its rebellious tone. Transposing the text onto Victorian England, a time already fashionable on TV and film, it feels Davies has taken an easy route to make it trendy. And though the result on stage is stylish, fitting of the suave Moll, this is an ensemble piece. Moll’s rebellion might be timeless – even now, rejecting gender expectations is controversial – but other characters belong to a particular moment.

In these unique surroundings, you become part of the theatre, encouraged to think about the interplay between past and present, fact and fiction 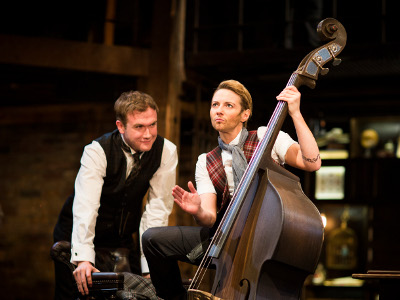 Take Mistress Gallipot, a comedic role handled perfectly by Lizzie Hopley. A character who outwits both her pathetic husband and lover, she feeds the sense of the play as a festival for women as well as for its young men. But against the backdrop of a rigidly ordered, industrialised, Victorian society, her transgression is mere fun, at most touching on the way reputation curtails women’s liberties. However, returned to the play’s genesis, in the sudden explosion of the capital – where trade and craft were blurring the class divides and bringing new freedoms to its citizens – her unruliness is more relevant and the ridiculing of the husband who can’t control her behaviour more meaningful.

Indeed, the play is sometimes such a conscious depiction of London’s early 17th century metropolis that whole sections become pointless without it. This is true of a scene in which Moll and Trapdoor ‘cant’. A display of local slang, it is handled with microphones, to signify a street culture similar to modern day hip hop but it remains pretty irrelevant in a vaguely Victorian setting.

That said, the negative impact shouldn’t be overstated. Whatever the costumes on stage (which create a good look in themselves), the Swan Theatre in Stratford-upon-Avon is so atmospheric and quintessentially Shakespearian that the performance can’t be divorced from its Jacobean past. In these unique surroundings, you become part of the theatre, encouraged to think about the interplay between past and present, fact and fiction.

The uniformly strong cast contribute in this respect, adding their own layer of comedy to the historic text. For example, as Goshawk, Peter Bray gives an especially sincere reassurance to Sebastian’s father that no priest will marry a woman in men’s clothing, as “it was never known two men were married and conjoin’d in one.” Likewise, Mistress Gallipot, reading a letter from her lover, rushes over a list of references to the classics with a merciful “Who are these people?!”

There’s no doubt, therefore, that despite being a difficult play to perform, the RSC’s revival of The Roaring Girl is worthwhile and provides a unique and entertaining evening. Each actor plays energetically to the closely seated audience and cutting through the comedy is something truly fascinating and empowering. Dillon performs a heroine of fact and fiction who had me swaggering home through the streets of Stratford-upon-Avon.

The Roaring Girl is playing at the Swan Theatre in Stratford-upon-Avon until 30 September.

The feature photo is by Tony Hisgett from Birmingham and is of the Swan Theatre. It is shared under a Creative Commons licence: CC BY 2.0. It is a large red brick building against a bright blue sky.

Lisa Dillon as Moll Cutpurse, a woman with short hair and some facial hair, wearing a white shirt and a tie with black trousers. She stands side on, looking at the camera with her thumbs hooked into her trousers. The background is smoky.

Lisa Dillon as Moll Cutpurse. A long-haired woman in a long skirt and bowler hat leans on a stick while smoking. Out of focus in the background, another woman works at a sewing machine.

Charlotte is a bookworm, culture-lover and novice media-maker. She has a degree in History from the University of York and tweets @charlyrowland