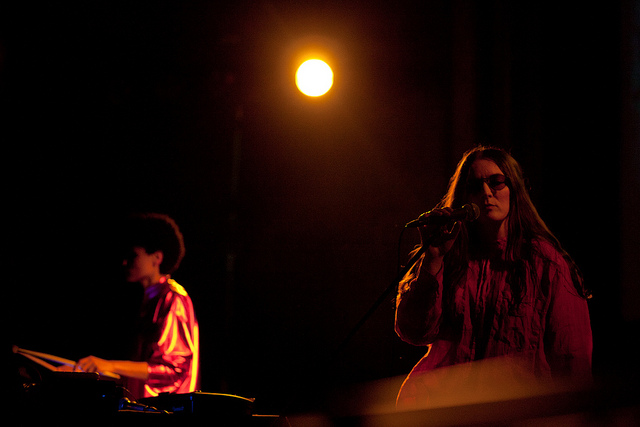 Marta Owczarek takes a look back at a performance from Genderqueer electronic musician Jam Rostron, AKA Planningtorock, in Hoxton earlier this year and shares a conversation they had about language, gender and the creative process.

It is not a particularly cold night in February, but concert audiences usually need a bit of warming up. This is not the case for Planningtorock‘s sold out show: 10 minutes into the set of the supporting rRoxymore, Hoxton Square Bar & Kitchen is already full and dancing; it feels like you’re stepping into a real party. Lots of people seem to know each other and there are many out and proud queer people (and couples). Not every gig serves as a safe space in this way.

rRoxymore is wearing a shiny purple tracksuit and Jam Rostron, aka Planningtorock (sometimes abbreviated to P2R), joins her on stage wearing a matching one, plus sunglasses. The P2R live setup looks simple: a big table (wo)manned by the same Hermione Frank of rRoxymore with laptops, mixers and decks. Meanwhile, Rostron concentrates on singing, sometimes walking around, getting closer to the stage and, at the beginning, they (Rostron uses neutral gender pronouns) walk the length of it, holding a book (though it’s impossible to see what it is).

During the opening track, ‘Public Love’, a background projection screen shows the message “Public displays of affection still illegal in 83 countries between people of the same gender.” Rostron’s voice, like on record, is very powerful and, as with Planningtorock’s overall presentation, androgynous and perhaps a bit reminiscent of Antony Hegarty. This is particularly the case on the Hercules & Love Affair tracks – similarly set to a dance tune with a throbbing, repetitive beat. The lyrics for ‘Public Love’ consist only of the mantra of the title, repeated over and over, occasionally spelled out, transfixing your attention, making your body move without you noticing. Rostron takes another walk in front of the DJ table, raising their arms, encouraging uproarious applause. Next up, the video to ‘Human Drama’ appears on the screen split seconds before Frank starts it up. The room applauds even louder, with lots of people visibly moved – the girl next to me is clutching her chest like it’s going to burst open. The performance is beautifully heartfelt and the refrain “Gender is just a lie” resonates powerfully…

rRoxymore (left, at a laptop and mixing desk) and P2R (right, at the microphone) on-stage at UT Connewitz, Leipzig, Germany on 25 Feb 2014. A stark spotlight shines at the top between them. By Alexander Klich, shared under a Creative Commons License.