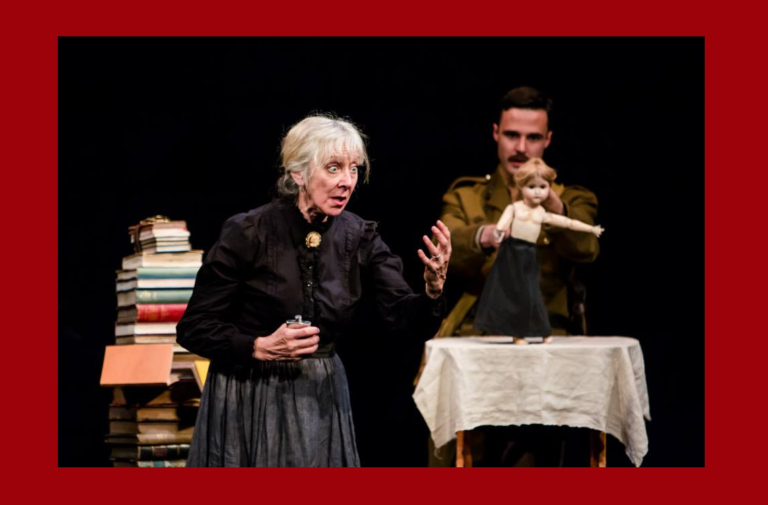 The theatregoer who chooses site specific and immersive productions is probably eager, inquisitive and often impressionable, much like Alice in her Wonderland. As I wait for the house to open I embody these qualities perhaps too fully and decide the young girl with bright blonde hair, magenta pink dress and electric blue ballet pumps must be part of the show. She’s not. She’s just an extraordinarily well-costumed child and now she’s sitting in the front row with me. We discuss how only two actors could possibly summon all of the characters of Alice in Wonderland! And with that, I become aware of what Alice could be through a child’s eyes; the fun and frivolity of the story I used to love has sadly been eroded by familiarity. Metta Theatre rise to such challenges perfectly by uniting their two audiences – children and adults – in a production with confidently straddles light and dark, innocence and experience.

This version focuses on the real life story of Alice Liddell (upon whom the Alice in Wonderland stories are based ) and her relationship with her son Alan Hargreaves. The play is set in 1915. Alice is 63 years old and her son is at war. As she sits alone in her cellar, rather than disintegrate into a Trojan grief she escapes to her imagination while her son drifts into madness on the front lines. The play takes place in the tube entrance to the Victoria and Albert museum, a low-ceilinged cellar filled with echoes of the outside world.

Rather than jump straight into the play, Metta Theatre allows the audience to take in William Reynolds’s intriguing set and Filipe Games’s expertly crafted soundscapes. This window of time also allows me to glance over the programme in which the director and adaptor, Poppy Burton-Morgan, writes: “I was also driven by a more political desire to invert the classic storytelling trope of young female protagonist buffeted from one male authority figure to another, and to present a mature female as the lead.” This is a noble plan and I’m glad to say, over the next hour of sophisticated and intelligent storytelling, she achieves it fully.

These surprises delight the audience as quickly as they unsettle Alice is a story packed with characters, locations, events and nonsense but at its heart is the unwavering bond between Alice and her son which is expertly played out by Mandy Travis and Jack Parker. Travis confidently imbues her Alice with an unapologetic curiosity and refreshing defiance. She leads the action and refrains from mawkish portrayals of motherhood – instead she is courageous, imaginative and honest. My excitement that the little girl sitting next to me is experiencing a strong woman lead who is deeply connected to her male counterparts but not defined by them reiterates how important gender representation is on stage, for any age group.

In turn, Parker gives a generous performance which subtly reflects on our expectations of masculinity too: he is a loving son and yet an isolated soldier, never dominating but always integral to the story. Parker seamlessly switches from character to character and is joyous to watch. His skills as a puppeteer are effortless and repeatedly elicit uninhibited cackles from the audience. He exudes a kindness which I’m endeared by right to the bitter end.

Together, Travis and Parker use a host of symbolic props to depict Wonderland, imaginatively re-defining what conventional puppetry looks like and giving every object purpose, identity and life: the rabbit is but a floating christening gown and the Cheshire Cat is an open purse. These surprises delight the audience as quickly as they unsettle: amidst the flurry of animated scarves and books a gas mask arrives and hints at the cloud of war which hangs heavy over Alice and Alan: all that remains of their bond is a pile of things and a familiar set of stories.

Alice is amusing but packed with an indefinable oddness: that feeling in your stomach which is both fear and excitement that all great stories trigger Alice is suffused with surrealist images and nonsense language, with the audience only reminded of real time by the continuous frenetic ticking of the clock. We know as Alan’s fate becomes clearer that all good things must come to an end.

As the house lights flick up I ask the little girl what she thought: “It was funny,” she says. For a second, I think about that word and it occurs to me she’s hit the nail on the head: Alice is amusing but packed with an indefinable oddness: that feeling in your stomach which is both fear and excitement that all great stories trigger, especially before bedtime.

Metta Theatre are experts at exactly that: storytelling, carefully constructing an atmosphere in which shifts in tone can glide into one another, taking the audience on a journey which feels bespoke. After all, in the face of bleak realities we all escape to our imagination sometimes, but perhaps not nearly often enough. Having been presented with a strong confident Alice who is a woman unafraid of her imagination I realise that yes – we are all in pursuit of our own unique adventure. With fresh new thoughts on an old story, I skipped out of the theatre and back into my own Wonderland.

Alice will be touring across the UK before returning to London’s Little Angel Theatre, 25-28 June.

The feature image is of an older woman wearing a black blouse holding up a hand in front of her face. Behind her a man dressed as a soldier holds a puppet in a similar position. There is a pile of books in the background. The picture has a red background.

Photos in the text are by Richard Davenport.

Photo 1: A white older woman wearing black looks into the distance as she embraces a creature made out of a gas mask and helmet; in the background a white man with a moustache reaches towards her.

Photo 2: The woman reads while the man stands behind her, looking at a small book.

Photo 3: A creature made out of open books and some glasses. The woman and man stand in the background.

Tutku Barbaros is a sweet tooth theatre maker, reading and writing since day dot.. She is currently a resident artist at Theatre Delicatessen with her feminist theatre company Plunge Theatre. She tweets @tutkubarbaros and @plungetheatre