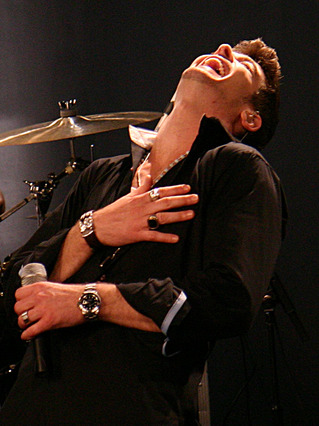 Robin Thicke has named his latest album after his estranged wife and vows to win her back. D H Kelly examines the stories we tell about men winning back the women who have left them

Poetry and music have many purposes, but one is to express the things that either can’t be said, or can’t be said with the fervour with which we feel them. This is why poems, pop songs and arias often contain the pleas of a side-lined suitor longing to be noticed, or a spurned lover begging to be taken back.

Some of my favourite songs contain outrageous and aggressive statements; “If I can’t have you, no-one will”, Marilyn Manson cries in his cover of Screamin’ Jaw Hawkins’ I Put A Spell On You. “I’m going down to shoot my old lady. You know I caught her messing ’round with another man”, the eponymous protagonist of Jimi Hendrix’s Hey Joe confesses. Even Arethra Franklin threatens to “rap on your door, tap on your window pane”, Til You Come Back To Me and I can’t pick a single line from Radiohead’s Climbing Up The Walls that wouldn’t be terrifying written in lipstick on the bathroom mirror.

It’s also inevitable that artists will write about their own pain and broken relationships. When writing about Emmy The Great for The F-Word in 2012, Vicky Ell introduced me to the heart-breaking Trellick Tower, one of the most devastating break-up songs of all time, written after the singer lost her fiance to a sudden religious conversion. Mid-divorce albums often gain a legendary status; Marvin Gaye’s Here, My Dear and Phil Collins’ Face Value are often purported to be their best work. These stories appeal to us, we hear added passion in the vocals and the lyrics seem all the more poignant for the context.

Robin Thicke goes one step further, calling his new album “Paula” after his estranged wife Paula Patton, and stating his explicit intention to win her back. If that feels uncomfortable, the track listing reads like chapter headings from the worst Twilight fanfic: Get Her Back, Lock The Door, Love Can Grow Back, Something Bad, Forever Love. Then there’s the video for Get Her Back featuring Thicke with blood on his face, miming a gun to his head, a woman’s face with a super-imposed skull and the same woman appearing to drown.

Of course, we’ve always listened to music with violent imagery, let alone sentiments of jealousy, hatred and control. Traditional folk music is jam-packed with murder, rape and suicide as well as misunderstandings over errant sheep. The French nursery rhyme Alouette is about pulling the feathers out of a thrush, but it’s a pretty little tune.

Pop lyrics are usually about feelings, being either low on narrative or highly stylistic in their story-telling (I’m fairly sure Jamaica’s police force never had the ranks of Sheriff or Deputy, acquitting Bob Marley of all charges). Art forms with a strong narrative need to be treated with greater caution. We have a central, cultural love story where a straight man in love continues to hope against all odds, displays his love in grand public gestures, risks his life to prove his worth, turns up uninvited at the wedding and eventually wins his object. That object is a human being, but she has little more agency than a coconut at a fairground. This story is so prevalent in our culture that a man who dies from drink and exposure while stalking an ex-girlfriend can be talked about like a tragic romantic hero. I strongly recommend Arthur Chu’s excellent essay on these narratives within nerd culture.

A song about wanting to rekindle a lost love is not a problem. Many of us have felt that pain, some of us will have made those desperate pleas and often more tunefully. However, Thicke taps into the cultural narrative of the lovelorn hero winning back his beloved with a romantic gesture – as one reviewer has already described it – by making his music explicitly about a real woman who has no say in the matter. It’s not impossible that Patton is charmed or else worn down by Thicke’s persistence. It’s not impossible that it was an amicable break and this story is a mutually agreed cynical move to build a buzz around the album; we all love a story, especially when it’s ongoing.

But, if not, an album with her name on and songs like Get Her Back place tremendous and very public pressure on Patton, while garnering sympathy and admiration for Thicke as a loving and repentant husband. These words and this behaviour are very familiar to survivors of abuse and domestic violence, who know just how ‘endearing’ persistence fails to be when someone believes that their vision for your future is more important than anything you think, feel or say. Whatever happens and however she feels, an album that bears Patton’s name and explicitly documents aspects of her marriage is now out there for all eternity (you can’t heat these things up and turn them into plant pots like you could with vinyl).

Toward the end of the Get Her Back video, there is an apparent exchange of text-messages on screen which demonstrate the most measured response anyone can hope for when trying to win back an ex-lover with a grand public gesture:

– I wrote a whole album about you.

[Image shows Robin Thicke, a white man with brown hair wearing a black shirt a lot of jewelery, holds a microphone and throws his head back with laughter. The photo is by Redfishingboat (Micky O) and is shared on Flickr under a Creative Common’s License.]