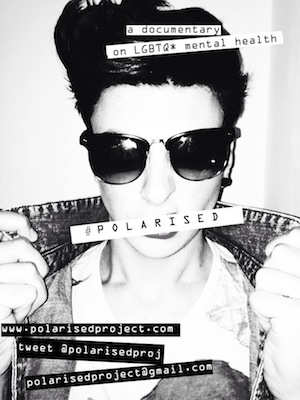 Polarised: An upcoming documentary on LGBTQ+ mental health in London

This is a guest post by Charlie Smoke. Charlie is a 23-year-old writer based in North London; he is currently writing his first novel.

There is a silent epidemic within the LGBTQ+ (Lesbian, Gay, Bisexual, Trans and Queer) community. It’s raging like a fire, singeing the streets of Soho, licking at the rooftops and bricks, scorching them an unseen black, awaiting the next young person to drop into its clutches and scream to no-one.

According to National Union of Students’ Mental Health Toolkit, LGBTQ+ people are ten times more likely to commit suicide than people outside that group, whilst 34% of trans+ people have attempted suicide.

Numbers and percentages on a page are hard to relate to. It’s nearly impossible, especially if you’ve never been there to gauge the tastes, the smells and the sounds of what it might be like to attempt to take your own life.

That’s why we launched the fundraising campaign to make the Polarised project a reality.

Polarised is an upcoming documentary on LGBTQ+ mental health. It will be a documentary of three parts: Neurosis, Psychosis and Dysphoria, with a focus on the trauma and shame that are so often linked to being LGBTQ+.

The project came from a desire to be heard and to give a voice to the thousands of LGBTQ+ people who suffer from ill mental health. It came from a place of desperation – of looking at the austerity campaign of this government and experiencing the effect of the cuts first-hand and realising that, if something wasn’t done, if we weren’t made visible, then the horrendous suicide rates within our community would only increase.

The documentary will focus on experience. We want to show the realities of living with anxiety or struggling with body image, riding the rollercoaster of swiftly oscillating moods or simply trying to overcome life’s hurdles within the microcosm that is LGBTQ+ London (we will be interviewing people from across the country, but the majority of the documentary will focus on London).

The LGBTQ+ community is not a utopia. Much like society at large, it has it’s own problems where race, gender, class and sexuality are concerned. With this in mind, we’ll be interviewing people suffering from, or who have experienced ill mental health within the LGBTQ+ community.

A documentary film is a risk. It’s expensive and time consuming. It requires gargantuan feats of organisation, not to mention huge amounts of energy. But it is a medium like no other when it comes to telling the stories of a community that is normally pushed back to the shadows or reduced to lazy sequinned stereotypes.

There is currently under a week left to raise the money we need to make the documentary. The money will go towards editing, equipment, travel expenses and other production costs. We aren’t seeking to make any money and all of our time, and the time of many of our nearest and dearest, is being given for free for one simple aim – to give a voice to the voiceless experience of thousands.

Any amount you can donate would be amazing. If you can’t donate but want to show your support, please share around the campaign page.

We look forward to seeing you at the premiere in the autumn, and hopefully in a screening room near you when we take Polarised on tour next year.