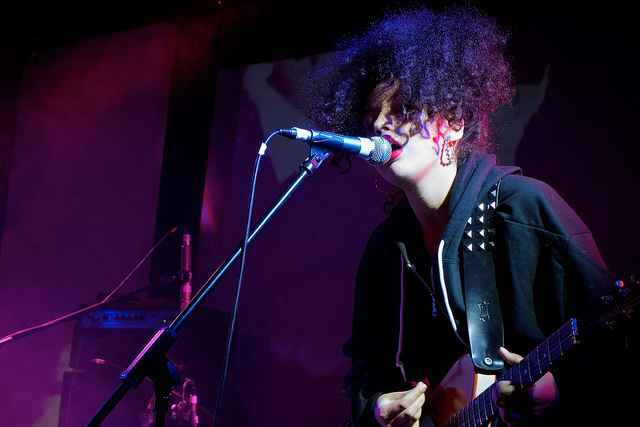 Stephanie Phillips enjoys rare footage on The Culture Show‘s Girls Will be Girls episode but is left wanting more than talk of fashion, women’s sex appeal and lingering concerns over the survival of the female punk spirit.

When it comes to documentaries on women in punk, the topic is usually given a brief five minute recap. A few token women are name-checked in between various dog-toothed male veterans discussing whether Lydon or Strummer influenced them the most. So when I see The Culture Show has a special half hour feature on women in punk I immediately sit down to see what it is all about.

In Girls Will be Girls, presenter Miranda Sawyer documents the history of women in punk during the early era of 1976/77 when it was limited to squats and small shows across London. Focusing on the stories of veterans Viv Albertine, guitarist in The Slits, and Chrissie Hynde, Sawyer inquisitively asks whether the female punk spirit still survives today. The answer is obviously yes, but let’s move on.

As a music nerd, I have sat through a fair few hours of grainy footage showcasing half lit basements and grey portraits of cities and landscapes that I somewhat recognise. The idea that new footage of these well documented bands existed seemed like a stretch but lo and behold, rare footage of The Slits, The Raincoats and a young Pretender-less Chrissie Hynde appear before my very eyes.

It’s certainly refreshing to hear the women who started it all reminiscing about the old days. There’s a particularly funny story about Viv Albertine getting kicked out of her own band by Sid Vicious because she couldn’t play guitar well enough that alone makes the show worthwhile…

Delilah of Skinny Girl Diet (eyes closed, with guitar and wearing black) at the microphone at Roundhouse Rising in February 2014. She is surrounded with purple light and a screen can be seen behind her. By Paul Hudson, shared under a Creative Commons License.