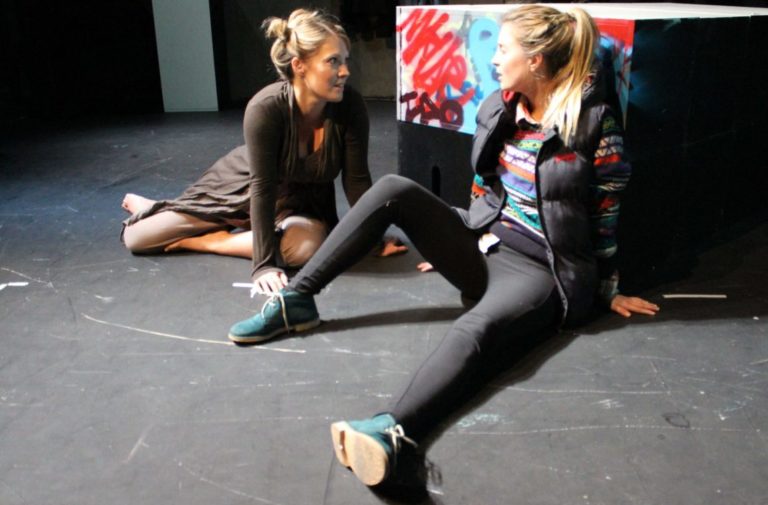 Not an open and shut case

In Shutters, Park Theatre presents three short plays in place of one. All American in origin, they purport to show life behind the country’s closed doors and comment on the changes for women over the last century. An all-women cast performing both male and female roles emphasises the latter intent. However, while the acting is uniformly strong and two of the pieces mesmerising, I’m not convinced that Shutters as a whole says much about the specificity of the female experience.

I think the problem lies with the first play of the evening: Cast of Characters. From the pen of Chicago playwright Philip Dawkins, and receiving its European premiere in Shutters, this is an inventive piece of work. It is essentially a play in abstract. Running through the character list, the cast perform a synopsis of a play we never actually see, with a voice-over interrupting to add humorous stage notes.

In doing so, you are introduced to a family of “three-and-a-half sisters”: a mother, three daughters and one son. It explains their individual personalities, preoccupations, and partners; one’s infertility, another’s degenerative condition, and their familial estrangements. After the next two plays have been performed, the way these lives are shown to intersect adds to the impression you receive from Shutters: of an individualistic culture and of the isolation of people in their own, complex lives.

This is interesting and does facilitate at least one connection between the different plays, but that is about as much as it offers. Perhaps it is the pace at which it is performed, but I find it difficult to identify with the characters or to find any plot. What you do sense from the bombardment of identities, male and female, are caricatures. Some of the humour around disability is also uncomfortable. Therefore, I do not take much away from watching it, save for slight irritation at an unimaginative transition that leaves me sitting, waiting for the next play to begin, with little to contemplate.

However, the same could not be less true of what finally follows, for these performances have much more resonance and depth. Trifles, an early feminist work by Susan Glaspell, is an atmospheric drama from 1916 set in the dim and drafty kitchen of a farmhouse in the Midwest. The owner, John Wright, has been found murdered, and detectives gather to prove his wife guilty. They strut around, puffed up by their authority, mocking the female neighbours for their domestic concerns. But they are the ones left ignorant, as the housewives uncover the experiences of the female suspect and society’s lack of empathy for women. Gentler in pace than Cast of Characters, Trifles has an intensity and moving authenticity which the first play lacks. This is also true of the third and longest play of the evening: The Deer. A more recent piece, again by a Chicago playwright, Brooke Allen and, likewise, receiving its European premiere, The Deer also adopts an unconventional structure but does so for genuine emotional effect. Mirroring the rhythm of a traumatised mind, it re-lives painful memories with the female lead, Clara: memories of a time when she and her brother struggled to belong and the moment when tragedy struck. Locating the elusive but powerful bond between siblings, it presses on the rawest realities of the human experience.

The result is poetically articulate and shows off the full strength of the cast. Yolanda Kettle and Joanna Kirkland as Clara and the deer are both captivating and Beverly Longhurst and Lucia McAnespie are authentic in male roles. However, I have to wonder if only casting women is anything more than a gimmick. If it aims to give Shutters a coherent focus on women, it fails. It is let down by the selection of plays because it is only the middle one that truly speaks to the specificity of being a woman.

The Deer deals (albeit it brilliantly) with a totally universal theme and only partly from a female perspective. That doesn’t undermine the play in itself. On the contrary, it has an ideal gender balance and both Clara and her brother feel equally genuine. But then, if the intention is simply to stage rich representations of women, I believe it fails with the first (incidentally male-authored) script. Perhaps, after all, the director hasn’t gone far enough in making Shutters a women-only space.

I think most likely is that Jack Thorpe Baker’s focus is actually elsewhere. It seems to me that Shutters is really a self-indulgent project, revelling in theatrical innovation. The evening seems most united by an enthusiasm for the novel work emerging from Chicago and the pioneering legacy of Trifles in American, feminist theatre. The other strands said to connect the plays aren’t so strong and the all-female casting also seems more experimental than essential.

Nonetheless, this doesn’t mean that the decision lacks impact or that the plays aren’t individually compelling. This dense and dark venue, closely encircled by three-sided seating, offers a strangely safe space to dismantle conventions and retreat into an assortment of stories. Although not all are to my taste, two definitely are, and Shutters is an indulgence that many will also enjoy.

Shutters will be showing at Park Theatre until 3 August.

The photos are used with permission and were taken by Skirmantas Petraitis.

Image 1: Two women sit on the floor, one leaning against a box covered in graffiti, the other leaning towards her, looking animated.

Image 2: A group of people standing, with two women in the foreground holding bottles of beer, one apparently listening as the other talks.

Charlotte is a history graduate, culture lover and media-maker. She currently volunteers with a women’s right charity and hopes to be more involved in that sector in the future