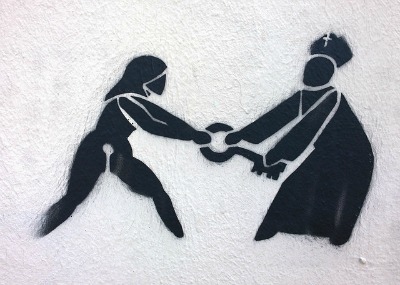 Rapists aren’t monsters (and that’s why they’re scary) – on the Cards Against Humanity creator’s response to being accused of rape (The World of Lilith T. Bell) There is a statement from the woman alleging rape in the above case.

Why does everyone feel so sorry for men accused of being predators? (The Guardian)

The attack by self-identified radical feminists on trans people’s participation in feminism and the LGBT movement has never been a response to any bad behavior by trans women or trans men. (The Advocate)

Single mothers ‘do just as good a job as couples’ (Guardian)

Photo shows a street art stencil of a woman and a priest. They are having a tug of war over a key. The woman has a keyhole in her stomach area. The figures are in black against a white background. Photo taken by Denis Bocquet

on Flikr, used under a Creative Commons Licence.