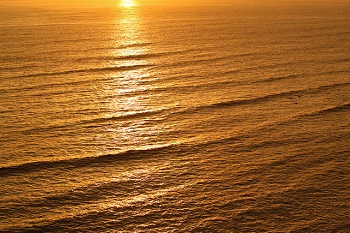 Ursula K. Le Guin’s writer’s handbook Steering the Craft is one of my Desert Island books. It’s a compendium of endlessly fascinating thoughts about creativity and human psychology, tied together by a loose but practical nautical metaphor (handy for getting off the island as well as filling the time on it).

But where Le Guin focuses pragmatically on charting a course, Caroline Bergvall’s new poetry book is about what happens when you are set adrift. “Being lost while holding on is simply getting stuck,” she writes, quoting the feminist and queer thinker Sara Ahmed: “Being lost is a way of inhabiting space by registering what is not familiar” (139).

This statement comes from ‘Log’, the eighth section of the book. It is a captain’s log of poetic exploration, being Bergvall’s account of writing two major pieces, ‘Seafarer’ and ‘Report’. From overall structure to individual words, the diary delves into the difficulties and delights of making creative work in the midst of political and personal turmoil.

Watching this in performance, the testimony is almost overwhelming. Bergvall speak-sings in a marathon show in which her powerful voice is the thread, the star our ship follows as audience

Above all, ‘Log’ recounts the sensation of lostness: of being lost in work, in language, in the politics of immigration, in between the end of old love and the beginning of new love, and in the ways all these things cut together. “Everything is connected in the vast chamber of the world, beyond the callous, brutal politics” (135).

But callous, brutal politics is at the fore of Drift‘s conception, despite its lyricism. Bergvall, whose father is Norwegian, uses Scandinavian and British seafaring poems of the Dark Ages as a way of reframing the current crisis around migration in Europe. These texts act as a reminder of Europe’s cultural and economic connection to the sea, charting a course from the Vikings, through colonialism, to contemporary slavery that puts prawns on our plates.

‘Report’ is at the heart of the book, a prose piece compiled from ‘Report on the “Left-to-Die Boat”‘ written by academics at Goldsmiths College, and an interview with a survivor, Daniel Haile Gebre, from the boat infamously abandoned in the Mediterranean by the Italian navy and international shipping at the end of March 2011.

Printed in white text on black pages, the piece is neither a found prose poem nor an open field composition: it is a report that uses the techniques of experimental poetry (collation, positioning, repetition, double voicing) to produce an account that can be more incoherent, more unstable, and more angry than academic standards allow. Its design is repeated in the maps that follow, where white dots on a black background form what could be constellations or radar blips. Are we looking at sea or sky? At the natural world or a technologised representation? We are placed, imaginatively, through empathic embodiment, in the same boat as the migrants who navigated unfamiliar waters by a failing GPS.

Watching this in performance, the first of Bergvall’s 2014 tour, the testimony is almost overwhelming. Bergvall speak-sings in a marathon show in which her powerful voice is the thread, the star our ship follows as audience. The page markings that have a graphic clarity on the page become animated films by Thomas Köppel, strange inverted versions of the moving maps some airlines show on their in-flight screens. These clever textual animations become starlit skies as Bergvall’s voice interweaves with Ingar Zach’s improvised percussion, which shifts between helicopter blades and ancient beat. Are we here, in the Purcell Room at the Royal Festival Hall, or there, on the seafarers’ boat? We are all at sea.

Drift is a reminder of the courage of faring, whether by sea or wordsea, of what’s dared by those who travel beyond the accepted borders and orders

“unknowing is to know” writes Bergvall in ‘Shake’, an invocation of the dead (98). This is a haunting piece of echolocation, a poem about what it’s like listening to voices others ignore and suppress.

the dead were marching through

noone was paying attention

thats when I started to.

Although Drift may not be centrally concerned with gender, it is an insistently feminist project; “Always gender and declension and kinship,” as Bergvall says of working with language (150). Its framework of listening to and for the unheard emerges from Bergvall’s sense of solidarity as a queer woman with others who are excluded from society. Writing in ‘Log’ about her new relationship, with a woman who was previously married to a man, she notes that legislative changes in Europe have eased aspects of LGBTQ life. “Families, vigilantes and coastguards can no longer in all impunity go to work on those it has taken to be halflings and skraelings”(165). But, she notes, the fear persists, and creates a solidarity with “others who still must live in abject lawlessness, in different degrees of hideout. Are you safe”(166).

Bergvall is not interested in safe: her work has always looked to “go deep down in time and in body, to bare bones,” challenging readers and listeners to do the same (128). Drift is a reminder of the courage of faring, whether by sea or wordsea, of what’s dared by those who travel beyond the accepted borders and orders. The result is both profound and witty: Gertrude Stein crashes into Douglas Adams in ‘Seafarer’ where “at the end of space there / is no restaurant at the end Wheres north from here from hér from her”(32). Whaling girls and “meeremaids” appear in ‘Hafville’ as a corrective to the masculine image of seafaring, amid language that conjures with “ok allround horniness Hear, / hear heaving with tidal thoughts,” the long history of feminine metaphors for the sea.

Drift sits with Rebecca Solnit’s A Field Guide to Getting Lost as an ethical, as well as creative, manual for feminist travellers and wanderers. Drifting through ‘Seafarer,’ we come across:

And undoubtedly Bergvall is a language “pirate fantabulosa.”. Her “gorgeous minglings”(51) raid the official troves of academia, the poetic canon, the military and the English language itself, and share the wealth with us. “Everything passes into everything / Anon I pass to everything,” ends ‘Seafarer’ (59). Her ship hears all distress calls, reminding us of our responsibility to each other and to the world.

Tour dates for Drift can be found here, with the next performance at the MK gallery, Milton Keynes on 2 October.

Photo by Geraint Rowland, shared under a Creative Commons licence

Sophie Mayer is a poet and poetic activist. She is the co-editor (with Sarah Crewe) of the activist anthologies Binders Full of Women (2012) and Glitter is a Gender (2014) and (with Sarah Crewe and Mark Burnhope) of Catechism: Poems for Pussy Riot (2014). Her third collection,(O), is forthcoming from Arc in 2015