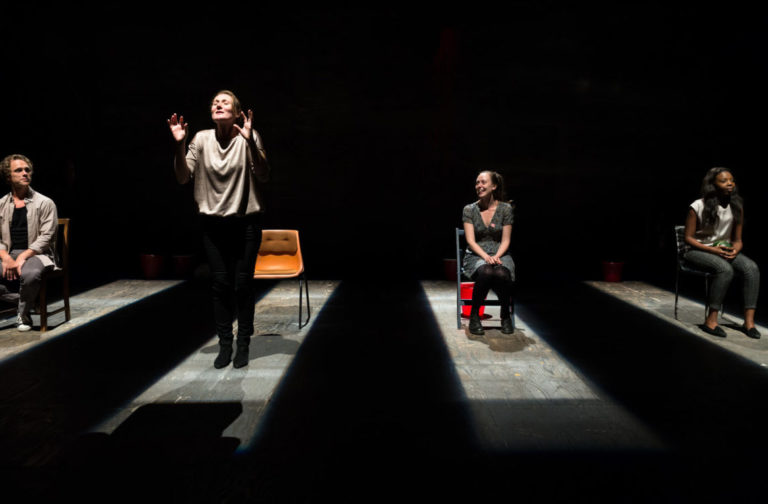 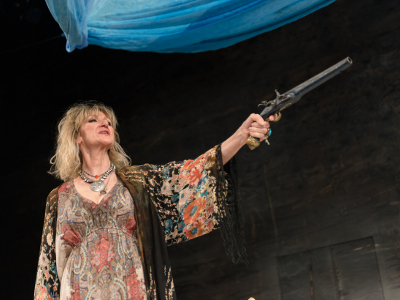 The Royal Shakespeare Company is currently running a ‘Roaring Girls’ season in Stratford-upon-Avon, showcasing Jacobethan plays that all feature impressive women characters who buck the norm of contemporary expectations. As a foil to this, four female playwrights were challenged by the RSC to respond to historian Laurel Thatcher Ulrich‘s famous claim that “well-behaved women seldom make history”. These short plays were showing at The Other Place, a performance space long used for more contemporary or daring productions. While I feel a flicker of frustration at the very literal othering of women’s writing (be assured that all plays in the main part of the season are by men), it’s also exciting to see a company like the RSC give such focus to writing that often angrily questions the status quo.

The four plays were divided into two programmes. Programme A opened with The Ant and the Cicada by Timberlake Wertenbaker, which tells the story of a woman living in her family home in Greece, where she divulges meaning through art and creativity while struggling with the reality of debts and taxes. Her sister arrives, bringing with her a man who is interested in developing the property. This propels the play, raising questions about the heritage, the merits of art, capitalism and family.

Programme A continued with Alice Birch’s Revolt. She said. Revolt again.. This play is in a very different style, almost like a sketch show, giving the audience a montage of scenarios of individual and collective revolution. Covering topics including sex, rape culture, work and labour, marriage and children, the momentum builds through the piece, with an increasing sense of urgency that implicitly asks the audience: “Well? What are you going to do about it?”

Programme B started with EV Crowe’s I Can Hear You, in which a recently deceased man is resurrected through the intervention of a crystal specialist. His grieving sister, though initially sceptical, wonders if they can also get back their mother, and embarks on a mission to reach her in a similar way. The festival ended with This Is Not An Exit by Abi Zakarian. In this piece, a tired writer spews out superficial list articles, exhorting women to look better and buy more things. Her conversations with her mother (a feminist activist when she was pregnant) and two characters (representing an extreme version of a ‘career woman’ and one who has seemingly embraced raunch feminism) attempt to expose the challenge of having it all.

The lexicon of sex is suddenly revealed to be oddly invasive, aggressive and competitive

Programme A was undoubtedly superior. Revolt. She said. Revolt again. was a particular triumph, including stand out scenes that were some of the most impressive, witty and inspiring I’ve seen for quite a while. I loved the opening sequence, where a man (played by Robert Boulter) and a woman (Mimi Ndiweni) tell each other exactly how they want to fuck. Starting with the man’s voice being the loudest, as he details erotic wishes in familiar language, this discourse is disrupted when he says he wants to make love to the woman. “Make love with“, she insists. This throws him – of course, with, of course, but should it be “kiss” or “kiss with”? As he presses on, she excitedly is right alongside him, aroused by what he says but making it her own. The lexicon of sex is suddenly revealed to be oddly invasive, aggressive and competitive, and for all the joy that Ndiweni takes in her suggestions of equivalence, it is clear that Boulter is not comfortable in unfamiliar territory. It made me feel a strong urge to emulate Ndiweni’s character and change how I talk about sex – not by aggressively critiquing language, but simply insisting on new vocabulary and phrasing that can more honestly represent how I see (want to see?) sex.

This is a piece that speaks to each individual and no doubt people in different circumstances will be fired up by different scenes. At the end of the hour, with the stage covered in detritus from an increasingly messy performance, I was gripped by a need to do something, to do more, to reach out and connect with others to insist on change together. Questions from the audience at a session directly after revealed I was not alone in this, which shows what an exciting piece this is.

The Ant and the Cicada wasn’t quite as compelling but I found it engaging nevertheless. I was gratified to find that the two sisters, although shown as being very different, were not written as caricatures: their struggle to communicate was more poignant and relatable. In addition, this was genuinely a play about real women facing real issues – it would have passed the Bechdel test with flying colours and it surprised me how unusual it felt seeing something where the female characters weren’t obsessing over their relationships with men.

The complexity of the characters meant it was harder to make a judgement call on the outcome. It seemed that the writing encouraged the audience to sympathise with Selina (Ruth Gemmell), the woman creating art and fighting against the transformation of a home that means a lot to her into capital. However, she wasn’t a paragon of virtue. Her dealings with Golden Dawn suggested a danger attached to this approach. I also found it a little hard to have sympathy with a character who owned property worth millions who felt that money shouldn’t dictate the direction of her life and her possessions and bemoaned the fact that the increase in value of her home had made her susceptible to more taxes. With the thousands facing poverty through austerity, those losing homes due to rigid and callous new restrictions and a generation who have been priced out of the housing market, I don’t think this property-related scenario is the most societally pressing. 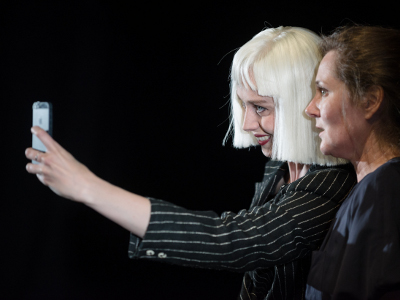 The play is made by an appearance by Irina (Ndiweni), Selina’s daughter, who is in character as Bouboulina, a naval commander key in the Greek War of Independence. Her mischievous monologue had the audience in the palm of her hand, with wry observations that had me laughing almost continuously. She talked directly to the audience, unusual in this piece, which helped bring us in and give us a sense of the structural issues that have led to the general financial situation (of the characters but also the world), thereby imparting more meaning to the proceedings.

Sadly, Programme B was rather disappointing after this. I Can Hear You scratches at some potentially interesting points – is the late mother’s failure to come back to the family due to her life being less lived? Has her position as a mother led to her being essentialised and taken for granted? Possibly. Or it could just be because the son died a few days ago and the mother died a year ago – I don’t really know how “crystal resurrection” is supposed to work.

Meanwhile, This Is Not An Exit felt heavy-handed and superficial. While I recognised the struggles of Blanche (Julie Legrand) as she felt pulled by different forces in her life and pressured into being all things to all people, the fact that the characters played by Ndiweni and Scarlett Brookes were so absurd made the problems less real, not highlighted. To be honest, I found it hard to concentrate enough to care, given how insipid the story was.

The only positive was Ruth Gemmell’s performance as Nora, Blanche’s mother, giving a much more grounded account of her feminist activism – if this had been convincingly contrasted to Blanche, it might have made a concerning point about the lack of continuity and building on the past of the movement. In fact, I felt that Gemmell played a valuable part whenever she appeared, and my only significant criticism of Revolt. She said. Revolt again. is that by only using the four younger actors, it missed some of the important contributions that an older performer could have offered. Overall, though, the ensemble was excellent and the women in particular all had chances to shine. 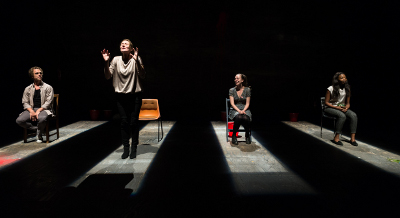 One theme that seemed to come out across all the plays was that of (mis)communication. I doubt this was intentional but there were a lot of moments where characters talked past each other and intentionally or accidentally subverted meanings. This ranged from the wilful deception of Selina in The Ant and the Cicada to the (rather clumsy) conversations in I Can Hear You where characters seemed to take three lines of dialogue before answering a question. This made me think about communication for the feminist movement, particularly combined with Revolt. She said. Revolt again., as there is such an imperative to nurture understanding to achieve almost anything.

I enjoyed the RSC’s foray into feminist writing. While Programme B lacked the radical thought that I think these opportunities are made for, Programme A did a lovely job of exploring and questioning issues around sex, gender and feminism. Revolt. She said. Revolt again. is particularly inspiring and solid enough to stand on its own beyond the festival. However, next I would like to see the RSC being even more radical and showing alternative writing and women’s writing not as an addition to a season but as an integral part.

The photos are by Topher McGrillis.

First image: A woman, shot from below, brandishes a pistol, pointing it at something/one out of shot. She stands under a blue canopy.

Second image: Two women, shot from the side, look at a phone as the woman dressed in a suit and platinum blonde wig takes a selfie of the two of them. The other woman looks concerned.

Third image (and feature image): Four chairs facing the audience are illuminated by strips of light. People are sitting three of them. One second from the left is empty and a woman stands up, talking and gesticulating.

Megan Stodel is preparing for the revolution. Until then, she’ll be reviewing theatre and playing Settlers of Catan