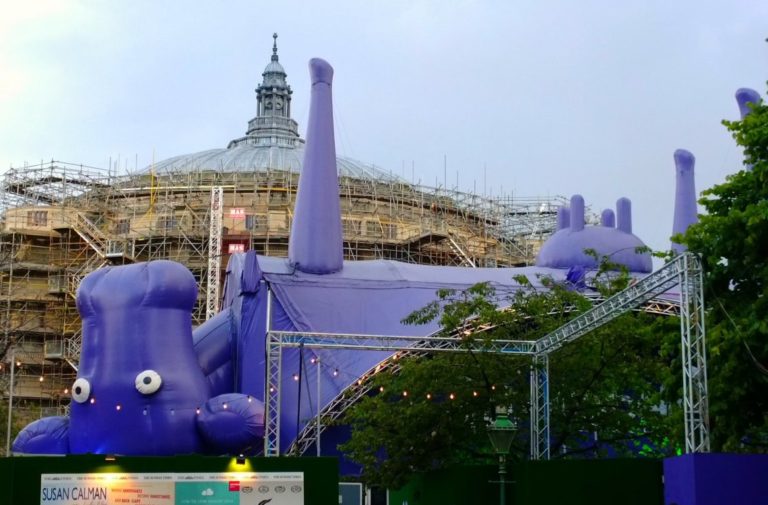 This inventive play explores the pressure on women to achieve the perfect body. But in whose eyes? The three young women are very much on view but the gaze they’re caught in is anonymous and threatening. They are literally trapped in a spotlight which flickers on and off as and when they perform appropriately. The women apparently want to appease the spotlight, say the right words and model their bodies correctly. They strike poses, competing to be sexy. They don’t seem to understand what’s expected of them but will do whatever is asked.

As the women enviously imitate each other, vying to allure the anonymous viewer, we come to realise that each one is insecure with her own body. Some rules are unanimously agreed upon. No body hair. No cake. But many of the expectations seem unclear. Two woman wish to be thinner – one draws dotted lines upon her body to indicate her desired shape, as her peer wraps her thighs in cling film. However, the woman they model themselves upon admits that she is painfully aware that people perceive her body as too thin, accusing her of anorexia. The play reflects the way perfection is insisted upon but unattainable and how these impossible standards harm women’s body image.

A clever, original piece which has me waiting with bated breath throughout most of the performance.

This snazzy production is a dizzying whirlwind through our country’s problem with debt – sometimes too dizzying. The three-person cast does an amazing job of portraying the opinions and experiences of a multitude of individuals, based on real interviews. We’re also provided with lessons in economics, complete with graphical illustrations.

Visuals and sound effects are used excellently and the acting is outstanding. However, the material is sometimes a little reductive, portraying bad banks versus their innocent victims. Society typically criticises those on benefits, presenting them as greedy, selfish and/or fiscally irresponsible. This play challenges that notion, showing that it’s the banks who encourage debt and indeed benefit from it, while those in debt suffer most. No alternative is suggested though.

With speakers ranging from a middle class graduate spending on holidays and clothes to a single mother who simply wants to treat her son to an ice cream, there’s no clear thread between the characters. The lack of a common route into debt (some are born into poverty, while others spend excessively) or any exploration of a solution leaves a faint feeling of “So what?”

A brilliant explanation of why and how individuals get into debt, but lacking any solution or implication beyond the individual level.

This autobiographical piece features two sisters: Amy, who works in the sex industry, and Rosana, who initially finds this hard to reconcile with her own understanding of feminism. The sisters reflect on their thoughts and experiences of sex. They are naked throughout the show, giving them at once a sense of power and vulnerability. Significantly, they’ve chosen to present their bodies to us: the two performers are very much in control of their personal narratives and we’re told how important choice is. The show is an empowering one, celebratory of female sexuality and form.

My main concern with this production is that while Amy speaks eloquently about having made an informed choice, based on her personal enjoyment of sex, she fails to reflect upon the implications the sex industry can have for other women. It’s refreshing to hear a voice such as Amy’s, yet it feels like this piece presents one small part of a much wider debate. Amy makes no claim to speak for others and acknowledges the uniqueness of her position as a confident, secure, free individual. However, I believe this particular subject matter must always be considered within its broader context.

Still, this play offers a rare opportunity to hear from a speaker in an often marginalised position and is a brave performance that will stay with me for a long time.

Click here to read more reviews from the Edinburgh Fringe 2014.

The feature photo is a photo of the Fringe taken by Abi Skipp on Flickr shared under a Creative Commons licence. It shows the Udderbelly – a venue that looks like an upside down purple cow – in front of a circular Victorian building with scaffolding around it. There is a structure made out of metal truss in front of it and some posters can be seen.

The photo in the text, from Private View, shows three women facing the camera and posing, a cornucopia of food before them.

Shows were reviewed by Shoshana Devora