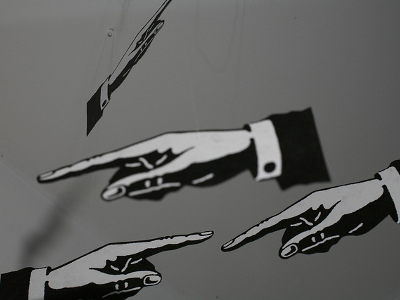 Shame is a feminist issue

How dare you! They’re pouring cold water over the idea. The voices that say I shouldn’t do it.

I want to write about shame, and it’s a problem because shame doesn’t like being written about. But I’m going to try anyway.

There are the moments when it soaks you in self-loathing so strongly that you have a desire to sink down the nearest drain to get flushed into a far away ocean. But these conscious moments of intense shame are only the red flag on top of the iceberg. I got it once when I dared to go on TV to participate on a debate on pornography.

For the most part, we experience shame as moments of embarrassment. I’ve experienced those when I haven’t done my buttons up properly or when I’ve gone for a promotion.

How dare you reveal so much of yourself? Uh oh, them again.

Then there’s the shame that hides underneath everything you do. This is the shame that we can’t see because we don’t allow ourselves to go near it. It’s what prevents us doing the things we want to do and stops us being the person we want to be. It’s quiet and powerful and the source of our internal censor. I can only dare to write about shame because I have learned about it on the outside/inside.

So now she thinks she’s courageous! Now I’m going to answer back. Not courage, insight.

Shame might have been known about in the murky depths of psychoanalysis but it’s a relative newcomer in popular psychology. John Bradshaw introduced the idea of toxic shame in the early 1990s and wrote about it in a gender-neutral way.

Women experience shame differently to men according to Brene Brown. The primary shame trigger for women is how we look. The competing and conflicting expectations that are placed on women are the other great shame trigger. We’re not lively enough, pretty enough, clever enough, assertive enough. We’re just not enough. But we’re also too much. We’re too loud, too sexy, too intellectual, too mouthy.

You’re done for. You mentioned the P word. Please leave me alone.

Of course men feel shame. But I’d hazard a guess that generally for men shame is a driver to have more and be more, for women it is an inhibitor – to say less, do less and be less. Whereas for men shame delineates some of their lives, for women it goes to the core of our identity. We are defined by shame. I’ll hazard another guess: that men don’t worry about armpit hair.

Brene Brown defines shame as a fear of loss of connection. As a feminist I would go stronger. Shame is a control mechanism which uses language and behaviour to induce painful feelings in order to shore up power. In other words, shame is a process, and the feeling is the end of that process.

She thinks she’s a dictionary now. Go away.

We need to challenge shame internally, as well as externally, because we do it to ourselves. It’s not just the immediate moment we need to think about. It’s in the history of the emotion. Shame reproduces itself and accumulates in our individual and collective identity. The shame from previous traumas affects how we see and interact with the world now. Even if we try to fight shame in the present we can get stymied by the past.

Now she fancies herself a psychotherapist. Can’t I write anything without these voices covering me in slime?

Some women have resilience to shame. Japanese artist Megumi Igarashi, known as Rokudenashiko (‘Good for Nothing Girl’) was arrested on obscenity charges because she made a canoe in the shape of a vagina and paddled in it. Now she’s committed to fighting the charges. The big question is: how we can learn from women like this so that we can challenge shame on a collective level. Igarashi’s a bit too far away to ask where she found her canoe-load of resilience to create art like that. But I can send her the Mag the Blag Award for Audacious Art.

Goodness, the woman’s giving out medals now. I’m going to deal with these voices once and for all – you lot can paddle away on the sea of your own bile. Done.

The image is by J E Theriot and is used under a creative commons licence. It shows a mobile of identical hands and suit cuffs pointing fingers.