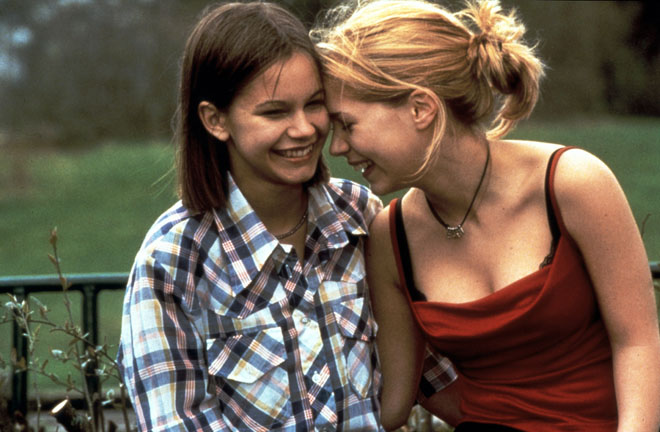 This is a guest post by Selina Robertson. Selina is a freelance film programmer and writer, curating queer film programmes in the UK and at international film festivals. Together with Sarah Wood, she runs Club Des Femmes, a queer feminist film club.

At time of writing, sad news: it has just been announced that Alex Sichel, director of the multi-awarded late 1990s lesbian feminist teen angst drama All Over Me has died young. A true pioneer and role model for all young filmmakers, Alex, together with her screenwriting sister Sylvia, gave audiences a poignantly honest and complex exploration of burgeoning female sexuality and friendship, at a time when most coming-of-age stories were about young boys. Perhaps later films like Blue Gate Crossing, Suddenly and Pariah might have not even made it into cinemas had it not been for Alex Sichel’s luminous film.

Cut to BFI Southbank’s inspired summer celebration of teenagers on film, Teenage Kicks. This specially curated, pint-size film and socials programme runs throughout August and we give three cheers to the season’s programmer David S Edgar for including some of our favourite lesbian/ feminist films from the last 40 years.

Firstly, a big shout out must go to the inclusion Brian De Palma’s proto-feminist teenage horror film Carrie from 1974 (let’s just forget about Kimberley Peirce’s 2013 remake…), the witches’ brew of all mother and daughter conflicts starring Sissy Spacek and Piper Laurie that takes audiences into the dark continent of prom night like never before. Next to the hugely influential suicide comedy Heathers (1988), the film that wiped the floor with Pretty in Pink (1986), broke Winona Ryder and Christian Slater into the mainstream and whilst it was not critically that well received on its release, quickly became a timeless cult classic. Without Heathers, there would be no Clueless (1995), no Mean Girls (2004). Imagine that?!

Finally, the perfectly imperfect Margaret (2011), a film that struggled to find a proper theatrical release in the UK, written and directed by Kenneth (You Can Count On Me) Lonergan starring Anna Paquin. Paquin gives a haunting, obnoxious and memorable performance as a privileged student from New York caught up in a guilt-ridden situation that she finds hard to unravel and walk away from: a brilliant study of a young girl’s self-realisation.

We are also really looking forward to catching I Am Dora‘s presentation and post screening discussion of French coming-of-sexual-age drama A Nos Amours (To Our Loves), a film that has been our list of films to watch for sometime.

However, our roll call of honour must be given to two most favourite films and three girl protagonists. Firstly, Dawn Wiener or “Wiener Dog”, “Lesbo” or “Stupid”, as her school friends like to call her. Dawn Wiener is the uber-geek-bespectacled-girl-hero of Todd Solondz’s brilliantly savage suburban comedy Welcome To The Dollhouse from 1995. Dawn (played to perfection by Heather Matarazzo) is an 11-year-old girl who wants to keep in with the “in” crowd and will do apparently anything to get her guy. However, Dawn is also resilient, resourceful and full of perception and life skills, which Solondz eloquently shows during the course of his first film. The movie won him the Grand Prize at Sundance in 1996 and spawned a thousand copycat Dawns that could never touch the original.

Secondly, we salute the inclusion of Lukas Moodysson’s debut film Show Me Love (1998) or Fucking Åmål (the film’s original Swedish title). Even back in the late 1990s, having a film released with “fuck” in the title felt provocative and the UK distributor (as well as the French, Russians, Germans and Spanish) renamed the film to something more palatable. The film stars Agnes (a depressed shy vegetarian with no friends) and Elin (the blond blue eyed girl who is so bored with her life she wants to mug a pensioner), two school friends who find each other and fall in love amidst the tedium, alcohol and monotony of small time life in Åmål .

Moodysson’s film came out just after run of murderous lesbians features that were, let’s face it, well made but completely depressing to watch for any lesbian feminist cineaste, Heavenly Creatures, Butterfly Kiss, Fun and Sister My Sister to name a few. Show Me Love, together with All of Over Me and The Incredibly True Adventures of Two Girls In Love, managed to do something new. Instead of psychosexual dramas with death in the middle, beginning or end, these films gave audiences honest emotional teen protagonists with agency. Show Me Love offered a fresh coming of age / love story that was distinctly European (Ingmar Bergman famously called Moodysson a “master of filmmaking”), straightforward, funny, painful and free from condescension. It also features one (and possibly two) of the most funny and moving coming out scenes in lesbian film history, cinematic moments worth their weight in gold.

Selina Robertson will be joining a discussion after the screening of Show Me Love at BFI Southbank Atrium on Thursday 15 August 3pm.

For more details of the season and to book tickets, check out BFI website.