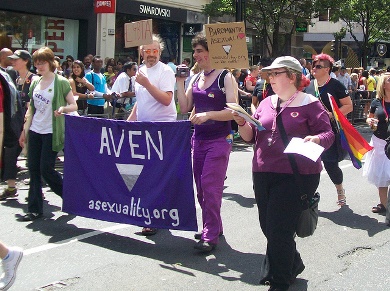 A closet heterosexual? Discovering my sexuality

I’d like to share my sexuality with you, or the lack of it. Currently, I identify as aromantic and asexual.

My first experience in the non-straight community came when I was 21. My sister subscribed to New Scientist magazine and in the August edition the magazine arrived with the cover titled ‘The Asexual Revolution’. I always read the magazine from cover to cover anyway, but reading the centre pages about David Jay promoting awareness of asexuality beyond the biologist’s definition of self-replication led me to the AVEN website – the Asexuality and Visibility and Education Network.

It was a very dial-up Internet friendly website (showing my age here). The people on the community forums were equally friendly. They offered me virtual cake in the welcome thread, because that’s what asexuals crave in their pillow forts at 2am.

It struck me very quickly that there was a whole bunch of people who were just like me – I wasn’t the only one! During my teen years, I didn’t have any answers for people who expect you to have sexual interest in others (preferably of the opposite gender binary) and for it to have a label.

My sexual labelling went thus: I’m not interested in men so I must like women. One week later: I’m not interested in women either, so I must be bisexual. A day later: Bisexual is to have an interest in both, and I don’t have an interest in either, so jokingly I’m an apathetic bisexual. Many months of persistent questioning later, I would say I was a closet heterosexual and run away before people had time to question why anyone would be in a closet about being straight.

Being on the AVEN forums gave me peace from other people’s aggressive questions about must liking people sexually. It gave me chance to read about other asexuals’ experiences in romantic relationships and it was then that I realised I’m aromantic too. This makes me a minority in a minority but people accepted at AVEN without question.

I discovered AVEN at a time when leaflets had just been produced to educate the wider community about asexuality. I had a bunch of them posted to me from America to distribute at my local gay pride event in Birmingham. I got chased down the parade by the people from the Brook Advisory Centre as they were relieved they could offer teenagers something that said it was okay not to be interested in sex with other people. I realised then it was important for me to be open about my disinterest in sex with others as well as my romantic disinterest. Discovering AVEN came after I became chronically ill, which was a shame, as people assumed I was asexual because of my illness. I know differently, of course.

So yes, in a culture that uses sexuality and romance as marketing tools, I find myself immune. It has never interested me to change my appearance or my personality to attract someone romantically or sexually and this has saved me a small fortune in cosmetics and fragrances and fashion. Lacking an inherent interest, I haven’t been drawn into the hyper-sexualised selling of products that creates a sense of inadequacy using Photoshop. Imagine how many industries would collapse if people were secure in themselves and celebrated diversity rather than thinking that we all have to align to some external ideal, that we are carbon copies like cars off a car production line.

Be yourself. Everyone else is already taken.

The image above is from Pride London 2010. It shows two people carrying a purple banner which reads ‘AVEN asexuality.org’ and has an inverted triangle symbol. Other people participating in the march can be seen too. The image has been uploaded by Flickr user Peter aka anemoneprojectors and has been shared under the Creative Commons Licence.