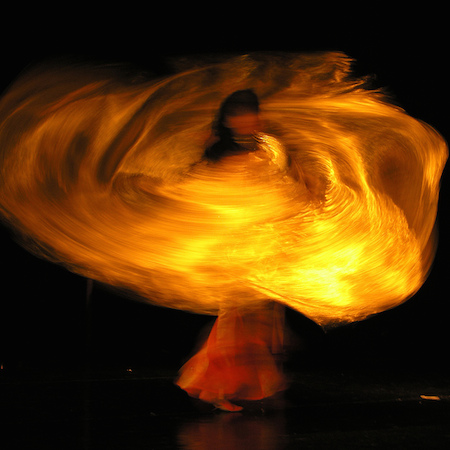 I belly dance. Dancing is in my blood, from the Latin and ballroom sequence dancing of my parents to the disco dancing my sister and I did as a child. Yet, everybody who knows me was surprised when I said I was going to a belly dance class that had just started up in my small town. Mostly when I leave the house I wear baggy clothes that are practical and comfortable rather than sparkly underwear.

It was something I could do that didn’t discriminate based on age, disability or gender. The class is about being included and to have fun whatever your attainment. In my case, I’d do a three minute routine at a non-disabled person’s pace and then lie down for 20 minutes to get my breath back and rest my muscles for the next routine.

Some things are the same: there are more women than men in dance classes. Stereotypically, young boys don’t belly dance and at the other end of the age spectrum, most men haven’t survived as long as women. For workshops, the male teachers get paid more than their female counterparts for the same work.

Some things are blessedly different: in tribal style belly dancing, it’s the responsibility of the leader to make the rest of the group look good and everybody gets to be the leader. You actually have to know the people you work alongside and when abilities take a hit with illness, you are very much included – everybody rallies around to show that you matter as a person. Anybody feel like they matter at work and are not a replaceable cog? Anyone?

It’s great that we are exposed to different cultural beliefs as to what movements are and we get to pick what we like and make it our own. In Western belief, belly dancing is about entertainment. In Romany Turkish, it’s about showing an indomitable spirit in the courts of your oppressors. In the latter, movements are masculine and feminine, not male and female. If you want to have an angular performance, movements will be more masculine. If you want a flowing performance, movements will be more feminine. They are attributes that we all possess and can express rather than being restricted by the gender binary.

Some things I really wish were different: The women in my local class stare at my hairy armpits and hairy legs and lack of makeup and nail varnish. Then some of them they say they wish they had my confidence to have their natural state in public. I say that we can do whatever we like with our bodies and shouldn’t fear an external judgement or perceived obligation.

I was asked to be part of an evening show with a paying audience of 150 people. My Western teacher asked me to shave my armpits as, and I quote, “It’s more feminine.” After the shock of two years of dancing with them for unpaid or small audiences with my body how I choose it to be, I told her that we have different ideas as to what feminine is. I like my pubic hair as it indicates to me that I am adult. I went on to say if people find my body with pre-pubescent attributes appealing, they might want to go home and think about that and we might want to attract money from a healthier attitude audience. I declined to do the dance.

At another evening show, I growled at the person who said I needed stage make up to combat the stage lighting but their will was stronger than my resistance to their brushstrokes. Most of it stained my costume. For weeks afterwards, I had spots as my body pushed out the cosmetic toxins. It’s as if cosmetics make spots on purpose so you use more cosmetics to hide the spots – a product that creates demand for more of itself is an excellent business strategy. The person who put the make up on me didn’t have to live with the negative consequences of their actions.

I have been asked to do the show this year. After 12 months, who I am and how I dance is being recognised as more important than what I wear and look like, even for the ‘big’ events. Some things are changing.

Image is of a belly dancer and has been taken mid-movement, so the dancer’s face is hazy and there’s a swirl of light around her. It was uploaded by Flickr user Krisztina Konczos and has been shared under the Creative Commons Licence.