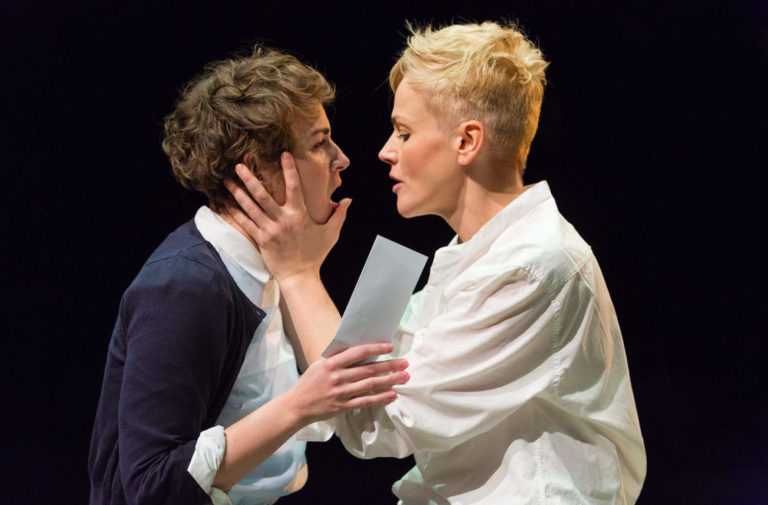 To be a little differently 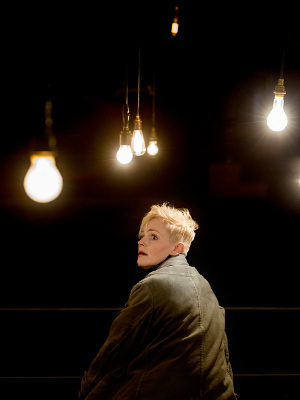 Playing Hamlet is often cited as a touchstone in the career of a great actor. From John Gielgud, Laurence Olivier, Ian McKellan and Derek Jacobi, to more recent adaptations with David Tenant and Jude Law, it is difficult to think of a well-respected male stage actor who hasn’t attempted the role. And yet, as the programme for this Sarah Frankcom directed production points out, there is an equally rich although more obscured tradition of women playing the part. The first Hamlet on film was a woman (Sarah Bernhardt), as was the first Hamlet on radio (Eve Donne). Shakespeare’s plays abound with cross-dressing and cross-gender role play; all female roles were originally played by men, so his work is ripe for this kind of experimentation. Maxine Peake proved to be more than up to the challenge.

Earlier this month, Peake could be seen being predictably magnificent in the series finale of BBC One’s The Village and on stage she proves herself to possess the same crowd-captivating skills as her television character, Grace Middleton. Peake’s Hamlet is male. At the beginning she plays him as sardonic and scornful. Hands in her pockets, with her hair cropped short, she is every inch a confident prince made stubborn and angry by his father’s death and his mother’s hasty remarriage. There is a danger that a Hamlet with a female lead is self-defeating: that in trying to prove the irrelevance of gender it only emphasises it by ‘feminising’ the performance. However, Peake’s presentation in the first act effectively eliminates these concerns. Her female presence onstage also adds extra depth to key moments of the play; the meaning of “Frailty, thy name is woman” is enriched when spoken by a woman. Hamlet’s mother, Gertrude (the wonderfully stately, yet vulnerable, Barbara Marten), refers to her “son”, yet when they hug and cling to each other, it is impossible not to see shades of a mother-daughter relationship as well as a mother-son one. Thus the play questions subtly, through the double-gendered vision the audience acquires at these moments, what we think of as masculine and feminine and why.

Is it worth considering that Polonius’ character is nagging, but is never described as such because he is usually played by a man?

While Peake is clearly a woman playing a male character, some of the other actors play parts where the gender of the character is reversed to accommodate them. Polonius becomes Polonia and Gillian Bevan brings a rich comedy to the role by playing her as an overbearing busy-body. Yet here too the production evokes stereotypes in order to allow the audience to question them. The first adjective Bevan’s Polonia brought to mind was “nagging”, which I dismissed because I dislike it as an offensive gendered term. However, is it worth considering that Polonius’ character is nagging,, but is never described as such because he is usually played by a man? Similarly, the nature of Polonia’s relationship with her daughter, Ophelia, appears changed by the gender switch. When Ophelia argues with and disobeys her father, Polonius, she is a rebellious child, but when she becomes exasperated with her mother, Polonia, we recognise a daughter’s good-natured frustration with the older generation instead.

A word must be said here on Katie West’s performance as Ophelia. Sometimes Ophelias tend to be so sweet before the onset of madness as to become saccharine but, from the beginning, West is a cheekier, charming girl with a wide range of facial expressions. Small gestures like sprawling on a chair rather than sitting and almost spilling wine hint at someone who lives on an edge. And when West does allow her to tip over the edge, she does so magnificently in one of the most affecting scenes of the play. The support from the Royal Exchange’s young company showcases some real talent from the children involved and successfully evoked the strangely eerie atmosphere of a theatre within a theatre.

There are few weak performances. Thomas Arnold’s Horatio appears constantly somewhat baffled and he suffers from lack of chemistry with Peake’s Hamlet; their friendship is never quite convincing. Similarly, the idea of having a young Rosencrantz (Jodie McNee) and Guildenstern (Peter Singh) ill at ease in the grand Danish court is a good one, but they do not quite achieve all they might, perhaps because their relationship with Hamlet is overshadowed by his more compelling ones with his uncle and Ophelia. 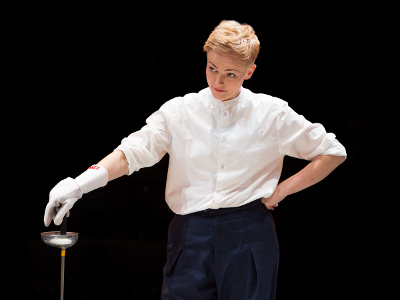 The set in the Royal Exchange’s round theatre space is simple allowing for the “fast-paced” production, as Hamlet is advertised on their website, to be realised. The arrival of Hamlet’s father’s ghost is indicated by a multitude of light bulbs dangling from the ceiling that light up in waves as the supernatural being comes and goes. It is effective and stylish, particularly at the moment when Peake’s Hamlet lies on the floor, his hands held up to the ceiling as the bulbs, and his father, recede far beyond his reach.

In the same spirit of simplicity as the set, several actors play double roles. In the case of the brilliantly versatile John Shrapnel, who plays both the ghost of King Hamlet and his brother Claudius, the doubling adds another layer of meaning. Inevitably, seeing the same actor play both the roles of the murdered and the murderer blurs the idea of good and evil as entirely separate things. Shrapnel’s Claudius is loving to Gertrude, and seems a competent leader, whereas the ghost of King Hamlet is physically twisted and goblin-like. When Hamlet and his father circle each other, there is a wariness that cannot be entirely explained by the presence of the supernatural. The weight of expectation that lies on a prince, and which Hamlet tries to escape for the rest of the play, is made evident in this scene and the sympathy the audience feels for him goes beyond the sympathy for someone who has lost a father. In Hamlet’s feigned madness, Peake’s true range is revealed as it becomes difficult to distinguish whether her Hamlet is in control of his forced glee or whether it is in control of him.

In the lead-up to this production, Peake has stated that the troubling lack of roles for women in Shakespeare motivated her to take the part. Both of her previous collaborations in Manchester with Hamlet director Sarah Frankcom, in Strindberg’s Miss Julie and a recitation of Percy Bysshe Shelley’s The Masque of Anarchy, challenged their audience’s with questions of social justice, and she appears to favour roles with a message. If the message here is that women can play male parts in Shakespeare, it has been received loud and clear. Moreover, the production manages to convince that women should be offered those parts.

Photos are by Jonathan Keenan.

Photo 1: Ophelia (played by Katie West) and Hamlet face each other. Ophelia holds a piece of paper in her right hand. Hamlet is holding Ophelia’s face.

Photo 2: Hamlet (played by Maxine Peake) is sitting down with his back to the camera, wearing a dark jacket. He is looking round as if his attention has been caught by something so his face is in profile. Six bare lightbulbs hanging from the top illuminate him.

Photo 3: Hamlet stands, one hand on hip, the other wearing a white glove and resting on the handle of an épée, a slender sword for fencing.

Suzanne Duffy is a recent Cambridge English graduate and a freelance reviewer and arts journalist. Her work has appeared in The Cambridge Student, edfringereview.com and Mancunian Matters