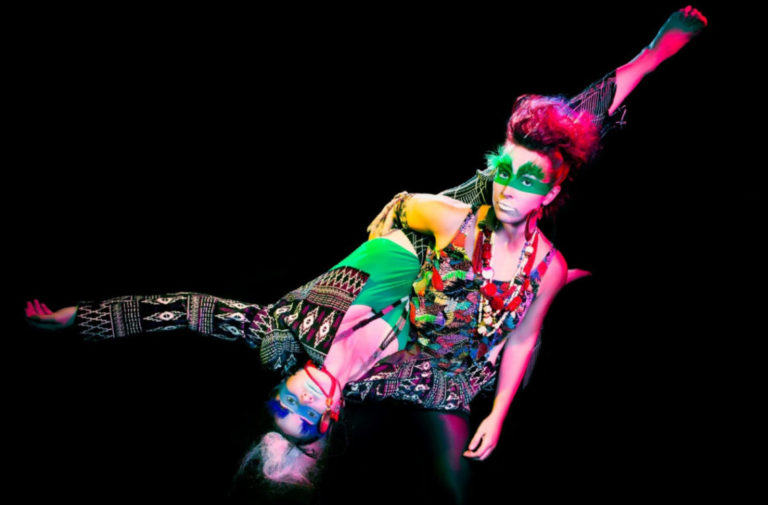 I believe that theatre should be for everyone. Many others do too, which is why theatre has always taken place on the streets, in community venues and as part of social movements (like it has recently outside the house occupied by the formidable E15 Mothers). But sometimes theatre can be a closed-off space, with a language (both auditory and visual) that feels like it belongs to someone else: someone cool, in-the-know and educated in the forms and structures of both classical and avant-garde theatre. So if you’re not au fait with the language, an experimental-dance-theatre-expressive-performance at a relatively trendy London theatre can feel pretty daunting.

It could feel like this entering to see RashDash‘s Oh I can’t be bothered at Soho Theatre, taking your seat on one side or the other of the split seating banks and being told that the “floor work” is best seen from the front rows.

However, this feeling won’t last for long. Dee (Abbi Greenland) and Bea (Helen Goalen) invite us into their world, no holds barred, in a language that most of us will know and recognise because it’s from our world, not the abstract world of art only the keyholders can enter. RashDash are creative in a way that tells a story. They use humour, fun, popular culture references and a carefully planned casualness to make the audience feel at ease immediately.

Dee is alone. Her best friend Bea has left her for (the horror!) a fairly dull and mediocre man. Worse still, she’s embracing the trappings of a normative, heteronormative relationship: weddings, engagements, babies, home decoration and mushy phone calls. Yes, they can still be friends but it’s awkward, spoiled, interrupted. Can Dee entice Bea back to her? Can Bea escape from the path she’s chosen?

Many of us will have shared Dee’s petulance at watching a friend find a partner and move on or will recognise Bea’s acceptance of a romantic life that at some point involves a discussion about napkin rings. RashDash portray these very human motifs through their humorous and insightful words but also through the power of their movement and dance. The two performers show the awkwardness of co-dependence by performing a dance with their heads always touching; they show the wonder of being alone through the power and control of their body movements. Where women dancers are so often confined to being graceful, sexy or emotive, RashDash are both beautiful and strong in their movement. It’s a pleasure to watch. Greenland in particular is so captivating that at times it’s hard to take your eyes from her.

It’s not easy to decide what this piece is about. It’s not overly confrontational; it isn’t meant to provide answers. For me, at the heart of this performance is a question of love: romantic, sexual and platonic. Not only what it is – what it sounds like, looks like, how we say it and act it – but also who it is for. When Bea is deciding what kind of love she should have, she’s deciding about something much bigger too. Does she choose the privilege of socially acceptable love that preserves the traditions of relationships between man and woman, marriage and children? Or does she forgo the privilege for something less tangible and easily labelled and therefore less socially acceptable, reliant on a relationship between friends, something that takes much more energy and work? Dee too is trying to navigate those same murky waters: the problem isn’t the working out which path your life lies down, it’s the choosing.

In addressing these questions and examining these fears, Oh I can’t be bothered is looking at a process, not a pivotal moment. These are the decisions that women (and, to some extent, men) make over and over again; to claim the spoils of tradition and institution (and to learn to accept that sometimes it is what we really want) or to live the life less ordinary (and learn that it, too, contains imbalance and harm).

I think RashDash didn’t quite go as far as they wanted, succumbing to more conventional dramatic structures in the last few scenes: the pivotal moment that they seemed to avoid; the speech of realisation. Coming after the performance that is beautiful, strong, controlled and deliberate, Bea’s climactic moment is a crescendo of drama, full of pleading, sloganeering, emotion and pathos, which doesn’t quite work. It feels over the top, like it’s inserted as a moment on the soapbox, or as a plot driver in a much more conventional piece. The final scene feels ever-so-slightly like it’s played for drama, the cresting then crashing wave of the story. It’s frustrating because they’ve been doing so well without the conventions.

RashDash say that this piece will evolve as it goes on and I wonder if they might find a different note to end on. Maybe it only jars because the rest of the performance feels so open to and comfortable with exploring complex and ambiguous themes. What this performance does well is to show us something familiar and comfortable in a form that may not be one we know well. Of course, the aficionados will probably enjoy it because it’s also clever, slick, brave and bold. But my point is, don’t be worried that it’s not for you or that you won’t get it, because it is and you will. RashDash may not give you all the answers but through their movement, they’ll help you work out the questions with strength and humour.

Oh I can’t be bothered is upstairs at the Soho Theatre until 19 October. Tickets cost £15.00 or £12.50 for concessions. It’s recommended for people aged 16 and over and contains female nudity.

The photo is used with permission. It shows two women, both in colourful, patterned clothes, striking a pose where the one on the right has her arm around the one on the left’s waist, who is in turn leaning backwards, held by the other with her feet in the air.

Rachel is a feminist sociologist Glaswegian living in London. She works for a mental health charity, loves books, watches too much TV and is prone to sarcasm. Say hi on Twitter @im_newhere