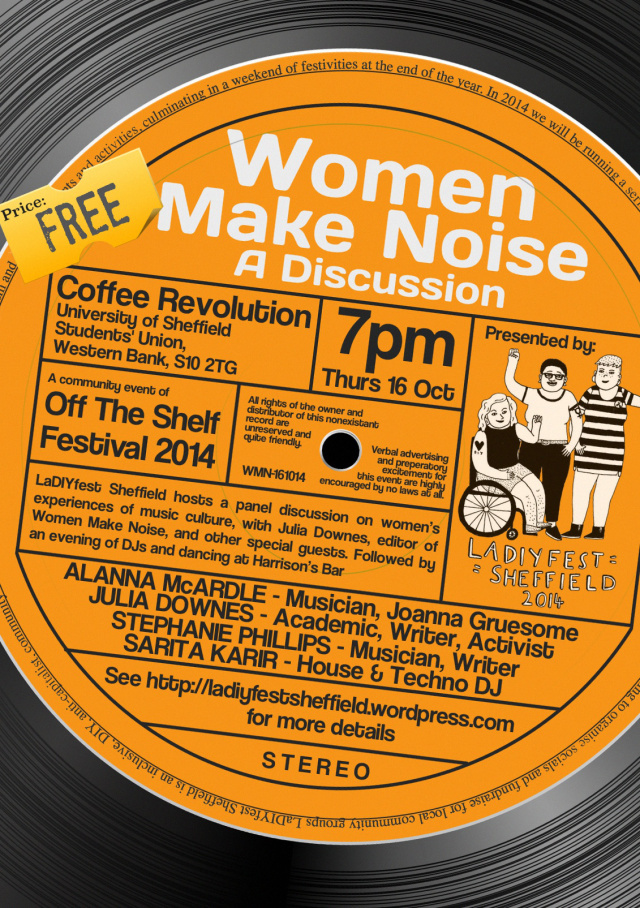 The music women make when left to their own devices is often sidelined. Julia Downes, editor of 2012’s Women Make Noise, previews an upcoming discussion in Sheffield on 16 October about DIY feminist efforts to counter this.

It has been almost two years since the book I edited, Women Make Noise: Girl bands from Motown to modern, was published on the Supernova imprint of the woman-run independent publisher Aurora Metro. The book was sparked by what seemed to me to be an obvious gap in the dominant narrative of popular music: the persistent underrepresentation of the all-girl band.

There is something peculiarly dangerous about the all-girl band. We are almost not allowed to know that they exist. In music culture, as all-girl bands are given very little visibility, it would be easy to assume that there are just not that many around. For instance, a recent survey of UK summer music festivals suggested that all-girl bands made up a mere 3.5% of total acts playing compared to 43% of all-male bands, 15.9% of bands with men and women and 16% female solo musicians. However Women Make Noise is a testament to what happens when you start to push music history a little further, to see what women create together when left to their own devices…

Flyer for Women make Noise: A Discussion. By Neil Holmes and shared with permission. This shows a close-up of a drawing of a black vinyl record with a yellow label showing the details of the event. A proportion of a description of LaDIYfest Sheffield as an inclusive DIY anti-capitalist community helping organise socials and fundraise for local community groups can be partially seen around the edge of the yellow label. The yellow label contains the name of the discussion at the top in white, with black text in separated boxes (from left to right and top to bottom) underneath. Most of these details have already been shared above but boxes containing the following are also included:

A drawing between “Presented by:” and “LADIYFEST SHEFFIELD 2014”. This shows three waving figures. The left person has medium length hair, a heart tattoo on their right arm and is sitting in a wheelchair, the middle person has short hair and stands, while the person on the right has short hair, a distinctive black and white striped top and is standing. By Emma Thacker and shared with permission.

“All rights of the owner and distributor of this record are unreserved and quite friendly / WMN-161014 / Verbal advertising and excitement for this event are highly encouraged by no laws at all.”