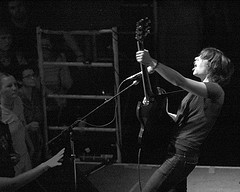 Believe the hype! Sleater-Kinney, the feminist wonder-group, have revealed a new single titled ‘Bury Our Friends’, announced a new album titled No Cities to Love which is due for release in January 2015 and confirmed a north-American and European tour, beginning in February 2015.

The news came as a surprise for fans who discovered the new single enclosed with a recently released limited edition vinyl boxed set of remastered versions of their previous seven albums.

The black and white image is a side-shot of Sleater-Kinney guitarist, Carrie Brownstein, singing and rocking out with her guitar on-stage. Image by Damon Green, shared under a Creative Commons license.