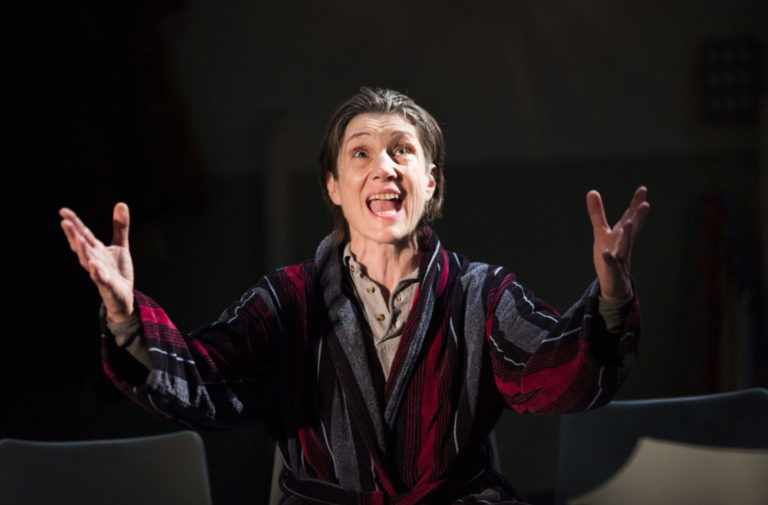 But yet a woman 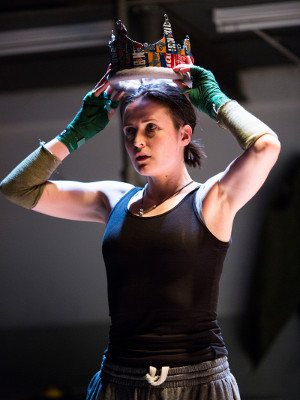 In 2012, I really enjoyed the all-woman Julius Caesar at the Donmar Warehouse, so I was really excited to go to this preview performance of Henry IV with many of the same cast and creative team. In design and approach for Henry IV, the director, Phyllida Lloyd, repeats many elements of the direction of Julius Caesar: the play is presented as if it is being performed by the inmates of a prison, the cast wear prison-issue tracksuits and toys frequently stand in for props. Shakespeare’s text is heavily abridged, with sections of the history plays Henry IV part 1 and Henry IV part 2 combined together in a speedy two hours with no interval. Taken together, the plays cover Henry IV’s difficult relationship with his son, Hal (the future King Henry V), Hal’s friendship with a group of reprobates led by Falstaff and a rebellion against the king with Hotspur (Sir Henry Percy) in a central role. The plays are often viewed as a coming-of-age story about Prince Hal, with Hal’s contribution to the defeat of the rebels and eventual rejection of Falstaff seen as steps on his progress to kingship.

I will always be glad to look down from my circle seat and see a group of women on stage, particularly as this cast includes many actors from a black and minority ethnic (BME) background and people of many different sizes and shapes. We don’t see this often enough on British stages. The theatre has collaborated with Clean Break theatre company, who work with women whose lives have been affected by the criminal justice system, on the casting and development of the production and are running commendable major outreach and education projects alongside it.

One of the delights of this production is the wide range of accents of the cast which for me added new energy and vigour to the text. An actor on Shakespeare’s stage would not have spoken with a standard received pronunciation accent; it was lovely to hear his words spoken by people with accents from London, Northern Ireland and Wales. I found that I was able to follow and relate to the text much more easily than is often the case which was in part because of the clarity of the intent of the actors and partly because I was seeing people on stage to whom I could relate.

Is it so difficult to imagine a world where women are in charge that the only way we the audience can be led round to the concept is by explicitly acknowledging the pretence?

In such a strong ensemble production it seems slightly wrong to single out particular actors for praise but I especially liked Ashley McGuire’s portrayal of Falstaff. Falstaff is a complicated figure, fun and good company on the one hand but dangerous and untrustworthy on the other, with a strong undercurrent of sadness underneath; McGuire played him beautifully. Jade Anouka as Hotspur was also compelling, delivering his lines with a clarity and energy and bringing a youthful hot-headed sparkiness to the role. Clare Dunne as Prince Hal and Harriet Walter as King Henry were both superb.

But although much of this production is excellent, where both Henry IV and the previous Julius Caesar fall down for me is in the overall play-within-a-play concept. I cannot fault Lloyd’s ability to bring the best out of her cast, put together a scene or develop the characters’ relationships, but that I am watching actors pretending to be prisoners pretending to be the characters seems like a dispiriting layer of complication. Is it so difficult to imagine a world where women are in charge that the only way we the audience can be led round to the concept is by explicitly acknowledging the pretence or by setting up an imaginary prison situation where the only possibility is women playing the parts? Is that the best we can do?

The conceit that the audience is entering a prison to watch a play performed by prisoners starts right from the beginning. The audience is asked to gather in a club on the other side of the street from the theatre and from 7.15pm we were called across the street and entered the theatre through the fire escape with prison guards directing the way. I did not feel that this use of an alternative entrance added much to the play itself. When the Young Vic did something similar for the beginning of Michael Sheen’s Hamlet back in 2011, the audience entered through the back of the theatre, but then went through a whole series of rooms with installations and actors representing the world we were entering. I suspect that the Donmar doesn’t have the same kind of space available – a fire exit with tape on the floor does not an installation make.

Lloyd and her team have made a fine, funny play with lots to think about and some smashing performances 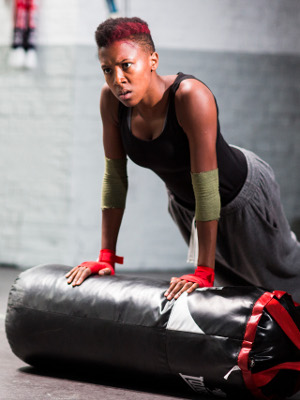 The play is most moving when the world of the prisoners and the world of the play coincide and reinforce each other, which makes me wonder further why this double layered reality was needed in the first place. I see no reason why Henry couldn’t be portrayed as the Top Dog of the prison, with other powerful prisoners trying to take her place, nor why in one scene Falstaff and her friends could not be ambushing someone within the prison walls. At its best the play within a play structure might mollify someone who really can’t conceive of women running the society, but at its worst this structure only undermines these women and their power within the play.

My overriding feeling on leaving the theatre was that I loved seeing these women on stage but I wanted so much more. I want to watch a play where no device is used to soften the impact of women deciding the fates of nations. I suspend a good deal of disbelief when I enter a theatre; I’m happy to sit in the dark with people I don’t know and watch some other people pretending to be kings and to later call that an authentic experience. Give me a try with women really being the rulers of England, the masters of battle and the drivers of their own lives. I might have to squint a bit because that’s not the world I live in now, but I’d really like to see it on stage.

Overall Lloyd and her team have made a fine, funny play with lots to think about and some smashing performances. Next time I’d like to see them go even further.

Photos are by Helen Maybanks.

Image 2: Clare Dunne as Hal looks ahead as she lowers a cardboard crown onto her head.

Image 3: Jade Anouka as Hotspur is pushing up from a punch bag that is lying in front of her. She looks ahead, puzzled or stern.

Lissy Lovett believes the arts are for everyone and tweets @lissylovett