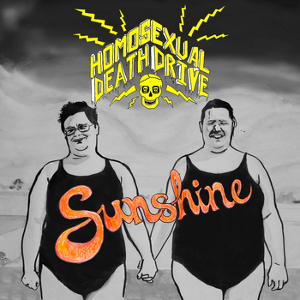 Their new EP ‘Sunshine’ is now available to buy from Bandcamp, with the following three tracks:

‘Sunshine’: an up-tempo song of abuse, survival and ambivalence

‘Theme’: an anti-social chant about rabbits and heteronormativity

‘Dead’: a queer hymn of death and living.

Homosexual Death Drive’s Facebook page for celebrating the official launch of ‘Sunshine’ on 22 November has details of a competition for fans to join Charlotte and Kay on a day trip:

To mark this historic occasion we are offering a lucky winner and up to two of their friends the opportunity to come on an exclusive Homosexual Death Drive with us in Kay’s fabulous Nissan Micra. We will take you to an excellent mystery location on 22 November. Entering the competition is easy, simply click the link and fill in the form. The winner will be announced on 15 November.

You can find out more about Homosexual Death Drive and what they’re all about in this excellent interview from Charlotte Richardson Andrews.

Cover art for ‘Sunshine’ by Andrew Milk. Black and white drawing showing Kay Isgay (left) and Charlotte Cooper (right) holding hands in one-piece bathing suits. They are outdoors and a swimming pool can just about be made out behind them. They are overlaid with the word ‘Sunshine’ in joined up orange letters, while ‘Homosexual Death Drive’ is written in yellow capitals at the top centre of the page, with a skull underneath. Lightning bolts shoot from both the words and the skull.