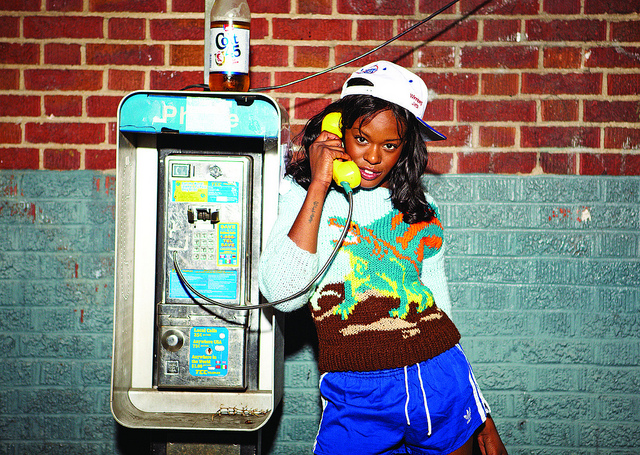 Hi-de-hi campers! Please click here for your November 2014 playlist. You can also view the track-list here.

After exploding into popular consciousness back in 2011 with ‘212’, Azealia Banks has finally released her debut album Broke With Expensive Taste this month, with a lack of characteristic fanfare. The album benefits from Banks’ exceptional rhyming and some seriously tight production. It’s definitely worth a listen.

I first heard Deniece Williams’ ‘Free’ on Kenny Dope’s compilation Strange Games and Funky Things and loved it. Her voice is absolutely sublime; the perfect track to unwind to.

Colleen Green’s ‘Pay Attention’ sounds remarkably like Veruca Salt circa American Thighs, which is no bad thing in my opinion. Similarly, Honeyblood appear equally influenced by 90s, lo-fi, indie goodness. Both tunes hit the spot, nevertheless, so I’ve no complaints.

The image shows Azealia Banks against a brick-wall background, leaning against an American phone booth, holding a yellow telephone receiver. A baseball cap is perched sideways on her head and she wears blue Adidas shorts and colourful jumper, with what appears to be a dinosaur print. She looks into the camera, with characteristic sass. Image by RTP, shared under a Creative Commons licence.