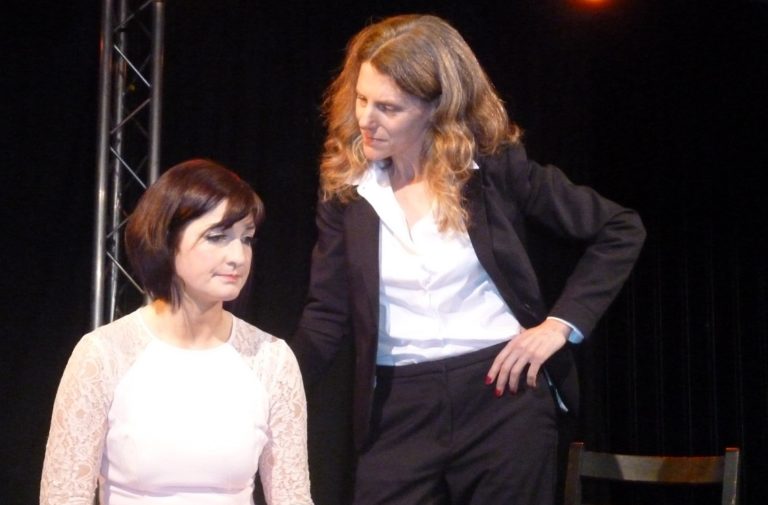 A side of Bechdel in your showcase

Scratch nights are the bread and butter of the up-and-coming theatre scene. Throw in a Bechdel Test theme and my attention is guaranteed! Whoop’n’Wail Represents…. The Launch has been produced with the assistance of 17percent, an organisation that supports and promotes female playwrights. It aims to showcase mini-plays that fulfil the Bechdel Test criteria: they must feature at least two women who talk to one another about something else than a man. The test, traditionally applied to film, has been around since the 1980s, but still many movies are hard-pressed to match its requirements. This was a successful attempt to apply it to stage work. The topics range from mundane to surreal and even supernatural, notably referencing the entertainment industry itself.

The Final Frontier by Sam Hall

The first micro-play merges sci-fi with comedy, sprinkling on some spirituality. When an actor encounters some actual aliens in an audition waiting room, she immediately assumes it is some bizarre form of improvisation. Of course, hilarity ensues, although only until we realise that she is actually dreaming (unconscious on an operating table) and about to choose whether she wants to wake up. Meanwhile, she almost has a romance with an alien captain trying to seduce her into staying…and this captain turns out to be Lilith, former lover of The Boss… did you lose the thread of the plot yet? Switching between genres owes a little to sketch comedy, but does not manage the lightness that usually comes with it.

Props to Victoria Denard for her comedic streak and stage presence, which carried the scene. Gavin Dobson and Debbie Christie were interesting as aliens, both in movement and artificially sounding voices. I was a little confused by Tatjana Sendzimir’s Captain, a morally ambiguous figure who is at her most intriguing when confronted by her ex, The Boss (a very good Christie). Overall, it was a presentation of interesting themes, but I’d like to see one of them explored in more depth. There were also moments when I wanted more imaginative staging, though John Mitton’s direction worked well with the initial alien scenes.

Three women in the music box by Dan Horrigan

This tells the story of a young girl’s three imaginary confidants who live in a music box. The story was quite well thought out and staged: the three characters represent very different types of femininity, interact fantastically and had us believe their improbable reality. Their young charge is about to go on a first date and bombards them with advice requests, indicating her moods with ink colour. Annabel (Lizzie Bourne), Bernadette (Thea Beyleveld) and Cora (Dani Moseley) decide that certain things in life need to be done without advice. Their spirited discussion of all issues related to the situation, ranging from the young girl’s self-determination to the way she ought to dress, manages to bring up several important topics in a humorous and poignant way.

The trio play off one another very well

The three women are fairly evenly matched in performance; Bourne’s Annabel has an air of a wide-eyed romantic and Beyeveld’s Bernadette advocates self-determination and comfortable dress. I admit having a soft spot for Dani Moseley’s Cora, preaching the importance of being sexy; however that may be because she has the more pointed, comedic lines. The trio play off one another very well, keeping up a speedy interaction, clearly credit to Alice Bonifacio’s direction and inventive staging. 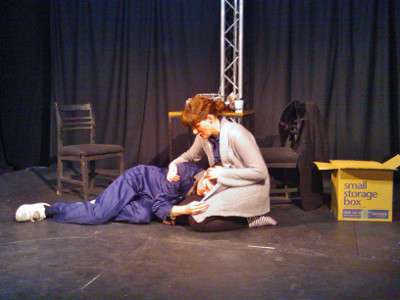 Cause for Alarm by Deborah Klayman

The next play tells the story of Anya (Ali Kemp), returning home after 20 years of absence. The story itself is quite sharp, focusing on Anya, forced by circumstances to return to her hometown, the stage of tragic memories. She is accompanied by Effie (Anto Cossu), friend and colleague, who valiantly tries to help her chronic depression. However Anya will not be easily comforted and is not helped by the appearance of Pete (Michael Luke Walsh), erstwhile fiancé who had left her waiting at the altar. The inevitable confrontation results in an emotional scene with tragic consequences.

I enjoyed the idea of the play, particularly the alarm and the ambiguity of Pete’s arrival (prison technician or escapee?) However, I was not convinced by the execution of it. Cossu is believable in her worry but struggles to nuance her performance and seems to lack power, especially when Effie is ignored by other characters. Kemp has a powerful presence, dominating Walsh, but both of them act more with their voices than bodies. There are definitely fantastic moments in their interaction, especially Anya’s cruelty and Pete’s attempts to hide his story; however this emotional material had the potential to be truly heart-stopping and I wanted more out of the acting. Also, I wonder whether Pete could be given a little more power in the scene – his determination to keep his secret leaves him no place to go, dramatically.

The two leads are neither victims nor wholly good; female characters are so often written as extremes

On the Horizon by Adam Hughes

After the interval comes a play about two women: Chloe (Amy Flight), an actor on the verge of fame, and Monica (Amanda Croft), her agent. Their conversations, veering into quarrels, astutely comment on the entertainment industry. As they discuss Chloe’s imminent stardom, they ask the age-old questions of a successful career: does the end really justify the means? Is one’s career reason enough to lie, or even abandon family? Both women have things to hide, even as they fight to preserve a high moral ground.

It is one of the more enjoyable stories of the night, mostly because the two leads are neither victims nor wholly good; female characters are so often written as extremes. As Chloe gains full knowledge of Monica’s machinations, she ultimately shows that they are evenly matched: they both want to succeed no matter what. Throughout the play we learn more about Monica’s background, which explains (though does not excuse) her behaviour. Croft is very powerful in her rendition of the character, isn’t afraid to use her voice as she cajoles and manipulates; it is a good, striking performance. Flight in turn manages to convey both her character’s initial naiveté, later on outrage and finally, determination. Directed by Sarah Davies, this is one of the more memorable plays of the evening.

We next witness the story of Kelly (Suzie Preece), who returns to the house of her dead mother after years of estrangement. Constantly on the phone with Sophie (Beth-Louise Priestley), she goes through possessions and letters (and a bottle of wine), only to discover that, excluded from Kelly’s life, her mother made up her own story. The correspondence is darkly amusing, betraying both a yearning for middle class existence and a need to create a narrative for an absent person.

The subject matter of this play necessitates imaginative staging. Preece takes the stage with two people behind her: Priestley voicing Sophie and other female characters, with Matt Mowat doing the same for Kelly’s brother, Peter. They go through the letters without emotional fireworks, yet somehow we feel Kelly descending into memories and guilt. Sophie, who arrives late to help her friend, will not be heard over the sound of music. Unfortunately, the final words of the play went unheard as well on the night I saw the show; nobody I spoke to knew the conclusion of what was otherwise a very engaging story. 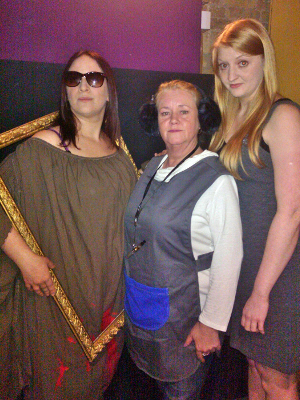 My Bloody Launderette by Ali Kemp and Deborah Klayman

The final play of the evening is My Bloody Launderette, written by Ali Kemp and Deborah Klayman. It is a delightful rendition of three very famous stories. What happens when Juliet (Georgina Periam) and Mona (Deborah Klayman) walk into a laundrette owned by world-weary Leia (Gerri Farrell)? The three get to compare stories and end up envying one another. Dirty laundry is an excuse for a great, funny story.

This is a bold retelling of stories that seem to be completely owned by mainstream. In true herstory spirit, the authors give a voice to an icon of female beauty, who turns out to be quite disgruntled and perpetually bored; an icon of starstruck lovers, who yearns to have more out of life; and finally to the only interesting female in Star Wars, who is tired of having to be everything for everyone. In the beginning one does not realise the identity of the characters, which only adds to comedy. All actresses turn in strong performances: Farrell is loud and unapologetic, Klayman flaunts an accent and radiates palpable frustration with the limits of being a painting, while Periam’s wide-eyed innocence provides fodder for quite a few funny turns. The writing is sharp and enjoyable, quoting source material without relying on it too heavily.

Overall, the showcase provides a mix of fresh ideas and an evening heavily skewed towards female authors and performers. Three members of the cast are male, contrasted with 14 women. However, a notable number of the writers and directors are men; that could be called into question, especially considering that the show was supported by 17percent. Granted, the premise of the show is not to give all positions of power to women – it is to fulfil the requirements of the Bechdel test, which, as organisers, Ali Kemp and Deborah Klayman accept in a recent interview, is “the lowest bar for female representation”. Their aim was to curate a show promoting gender equality without excluding men and in that they have succeeded. The fact that the characters are mostly female belies the prevalent mainstream ‘compromise’ that women only exist to advance the plot of male heroes. As it happens with showcases, it has stronger and weaker points, but presents several interesting narratives – not to mention a largely female viewpoint, still so often absent from theatrical experiences.

The photos in this post are used with permission.

Photo 1: Amanda Croft (Monica) and Amy Flight (Chloe) in On the Horizon by Adam Hughes, directed by Sarah Davies. A woman in a white dress is sitting while a woman in a suit stands with one hand on her hip and another on the other woman’s back as she looks down at her. There is a wooden chair to the right. Black curtains and a metal lighting rig make up the background.

Photo 2: Ali Kemp (Anya) and Michael Luke Walsh (Pete) in Cause for Alarm by Deborah Klayman, directed by Emily Bush. A woman kneels on the floor while somebody else lies with their head in her lap. She appears to be comforting them. To the side is a small cardboard box reading “small storage box”. Behind them is a table with some undistinguishable items on it with two chairs next to it. The background is the same as before.

Photo 3: (L-R) Deborah Klayman, Gerri Farrell and Georgina Periam from My Bloody Laundrette by Ali Kemp & Deborah Klayman, directed by Paul Kevin-Taylor. Three women stand in a line looking at the camera. The woman on the left wears sunglasses and holds a gold picture frame around her body. The woman in the middle wears fluffy black earmuffs.

Rita Suszek believes that feminism and mindfulness can coexist in one brain (it’s working!) Artist, blogs at Sandwich With Everything and tweets at @Rit4Art