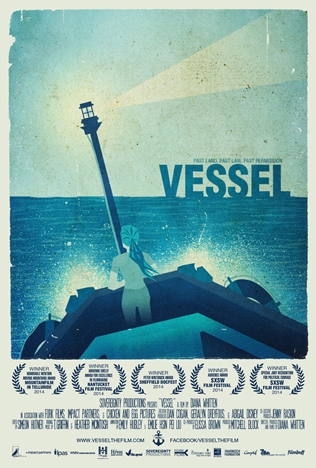 “Vessel begins with a young doctor who lived by the sea, and an unlikely idea. Rebecca Gomperts, horrified by the realities created by anti-abortion law around the world, felt compelled to challenge this. Her method: to provide abortions on a ship in offshore waters.

Her project, Women on Waves, begins as flawed spectacle, a media frenzy, faced with governmental, religious, and military blockades. But with each setback comes a more refined mission, until Rebecca has the revelation that she can use new technologies to bypass law – and train women to give themselves safe abortions using WHO-sanctioned protocols with pills.

We witness the creation of an underground network of emboldened, informed activists, working at the cutting edge of global reproductive rights, who trust women to handle abortion themselves. Vessel is Rebecca’s story: one of a woman who heard and answered a calling, and transformed a wildly improbable idea into a global movement.”

After its UK premiere at Sheffield Doc/Fest, the film screened at Leeds International Film Festival in November, from where our contributor Liz Smith reports.

The picture is Vessel poster.