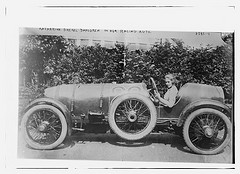 Loujain al-Hathloul, 25, attempted to drive a car across the border into Saudi Arabia from the UAE on Sunday, November 30, after posting a YouTube video on Saturday announcing her intentions.

“Let’s see what’s going to happen,” she said in the video. She did not get very far; Saudi officials confiscated her passport then subsequently held her at the border for 24 hours. Al-Hathloul tweeted on Monday that she was still being detained. “They aren’t giving me my passport back, nor are they letting me cross the borders (sic) and the Ministry of Interior remains silent. Complete silence from all officials.”

Her friend and fellow activist Maysaa al-`Amoudi, 33, traveled to the border the next day to provide her with supplies for the unexpected lengthy wait but was also detained on arrival, though she had not intended to drive into Saudi Arabia, an activist who declined to be named said. Both women had previously been outspoken critics of the ban, and have also been heavily involved in the movement “Women2drive” which has gathered considerable support in the past few years. The movement launched several campaigns encouraging women to drive and publicize themselves doing so. On October 26 last year many women took to the roads posting videos and pictures of themselves driving, in some videos male drivers are shown to be giving the thumbs up sign in support.

Al-Hathloul has also posted numerous videos of herself behind the wheel while encouraging other Saudi women to defy the ban.

The activists have since been taken to Al-Batha-a port Police station where they were interrogated and arrested by the authorities, activists told Human Rights Watch. They are now currently being held in separate prisons, al-Hathloul is being held in a juvenile center for girls and al-`Amoudi is being held in the al-Ahsa central prison, according to the activists.

“To imprison them is illegal and is a breach of human rights,” says one well-known Saudi activist who declined to be named. “Loujain had only asked to enter Saudi Arabia, and therefore had not yet broken any religious law. As for Maysaa, she had only been driving to the border to provide al-Hathloul with a toothbrush.”

Saudi Arabia is the only country in the world to restrict women from driving and imposes strict penalties for women who flout this fatwa (Islamic legal rulings). One Saudi Sheikh has even gone so far as to say that women who drive will suffer physiological problems as the ovaries are damaged and the pelvis is pushed upwards resulting in children with clinical disorders. (1) It is also feared by the Grand Mufti, the country’s most senior religious authority that it will result in social chaos, encouraging contact and exposure between the sexes. (2)

The Monitor for Human Rights in Saudi Arabia and the Gulf Centre for Human Rights (GCHR) believes that the targeting of activist Maysaa Al-Amoudi and Loujain Al-Hathloul forms part of an ongoing systematic policy of harassment by the Saudi authorities against activists who demand the women’s right to drive a car in Saudi Arabia. Many activists have already been detained and have had their cars seized.(3)

Many womens rights activists have rallied against this highly restrictive ban which forces women to rely on paid drivers or male relatives for any mobility outside the home, even to go to the doctor.

News of Al-Hathlouls’ detainment has caused widespread dissent, with many women again this week taking to the streets in a car and posting videos up on YouTube.

At present, Saudi officials have yet to comment on the charges laid against the three activists in custody. It is unknown what their punishment will be.

The photo above illustrates a vintage photo of a woman sitting in a car. Thanks to the Library of Congress for the photo which was used under the creative commons license.

(1) Driving “could have a reverse physiological impact. Physiological science and functional medicine studied this side [and found] that it automatically affects ovaries and rolls up the pelvis. This is why we find for women who continuously drive cars their children are born with clinical disorders of varying degrees,” Sheikh al-Luhaydan. Quoted on Saudi news website sabq.org.

(2) 1991 fatwa issued by the late Grand Mufti of Saudi Arabia Sheik Abdulaziz bin Baz. The Grand Mufti claimed that allowing women to drive would result in public “mixing” of men and women, put women into dangerous situations because they could be alone in cars, and therefore result in social chaos. Wikileaks cable 09RIYADH357_a