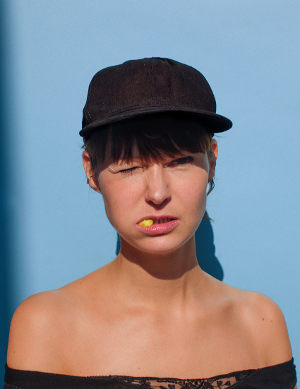 Forever Maybe is Norwegian singer and multi-instrumentalist Hanne Kolstø’s fourth solo release and it’s a slightly poppier affair than her previous three excellent solo albums. This aspect has its good and its bad sides in that several of her more pop oriented tracks work very well and it’s interesting to see her experiment, but, for me, a few of the songs veer a little too close to mainstream pop.

Opening track ‘BlankO’, with its dark synths and refrain of “I don’t wanna feel anything, I don’t wanna think anything” sets the tone for an album with repeated references to solitude, leaving and moving on. At the 01:30 mark, the beat becomes a little more up-tempo and, as Kolstø’s wistful vocals glide over the music, the track achieves the paradox of being joyfully bleak. The occasional whoops that follow “Is it in me or outside” towards the end of the track could be euphoria, anguish or both. It’s a triumphant album opener.

The album continues with the more melancholy and dreamlike ‘Synnecrosis’ and, again, the theme is focused on the act of leaving. Kolstø sings the line: “I am leaving you ’cause I’m lost and found” almost breezily, as if leaving is an inevitability she has learned to cheerfully accept. However, as the song progresses, uncertainty creeps into the lyrics: “…and if I choose to stay behind, would you come look for me later?” As the song closes, the music falls away and the way Kolstø sings “I will never never never, never never ever be alone” sounds so assured, it seems like a threat.

Some reviewers have zeroed in on the album’s first single, ‘We Don’t See Ourselves’, as a particularly strong track but, for me, this is one of the weaker songs on the album. It’s undeniably catchy but also a little bland, especially when contrasted with some of Kolstø’s better songs. However, the video (a companion piece to the videos for older songs ‘La-la-la-la Lovesong’ and ‘One Plus One Makes One Out of Two’) is delightfully strange and beautiful. As with the aforementioned videos, it features Kolstø and a young woman; this time, they explore each others’ faces, each running their fingers along the others gums before dancing together and lying in bed. These sweeter moments are interspersed with brief scenes of violence between the two: a mixture of tender and disturbing that fits Kolstø’s music very well.

Lyrically, Kolstø is refreshing in that she often sings of emotional issues with far more focus on how these issues affect her personally than on anything else. Rather than berating herself or others, her lyrics focus on her own emotional development. There is no real speculation on how the person being left might be feeling, or really anything much about other people at all. She can be fabulously gloomy with all her talk of solitude and the desire to be alone. Although there are many lyrical references on Forever Maybe to something ending, the album also conveys a sense of the joy that can be found in leaving and an understanding that, sometimes, leaving something behind is the best thing to do.

The album includes a few slightly rockier songs than the last one, Stillness and Panic, such as ‘The Urge to Repeat’, with its shouted backing vocals calling Sweden’s Love is All to mind. This song could be seen as a reflection on the dangers of repeating oneself (Forever Maybe is her fourth album in as many years!) but I honestly don’t think this should concern Kolstø. She isn’t afraid to try out different styles and while they are not all necessarily equally successful, this doesn’t make her any less creative or compelling as an artist.

The album’s midpoint and title track, ‘Forever Maybe’, is another standout. Again, Kolstø sings about leaving, this time over a chilly electronic backdrop. While in ‘Synnecrosis’ she sings of being on “the ocean floor”, she worries here about being left “on the ground”. Lines like, “I’m leaving, I’m leaving, already gone” have a dark finality to them and, for one of the few times on the album, what sounds like a slight sense of regret.

The final song of the album, not counting the hidden track, is ‘What is This Meant to Mean’. This is a beautiful closer. Kolstø’s mournful vocal soars over a Cure-like bassline and the whole thing moves forward like a dirge before, after a slow-building wail, suddenly exploding halfway through in a sad, shimmery climax, where conflicting voices repeat “I want out of it” and “What is this meant to mean, what do I really mean?” The chanting layered voices are a mixture of deep and airy, calling to mind Cocteau Twins’ Elizabeth Frazer’s vocal style.

Forever Maybe is very much about picking yourself up and moving on, scary as that may be. In many ways, it’s focused on self analysis, thinking about who you really are and realising that you’re maybe not quite sure but that that’s OK. Throughout the album, Kolstø switches from sounding lost to coming across as utterly self assured and sometimes authoritative, which makes her moments of vulnerability all the more effective. There is no cooing here and even at her most vulnerable there is always a core of strength behind Kolstø’s vocals.

So while, overall, the album is perhaps a little more conventional than Kolstø’s previous releases (although they were hardly inaccessible) and includes a couple of filler songs, such as ‘True Story’, it is still a good one with tracks such as ‘BlankO’ and ‘Forever Maybe’ making it well worth a listen.

Head and shoulders shot of a winking Hanne Kolstø in a black cap and off-the-shoulders black top made from T-shirt style cotton and black lace. She stands in front of a light blue wall, throwing a small shadow behind her neck area. Her right cheek is slightly puffed out by what appears to be a piece of orange behind her lips and in front of her teeth.

Joanna Tocher is based in Bergen where, after a rather lengthy interlude teaching in Japan, she now finds herself at university once again. When she isn’t writing short stories and poetry, she’s drawing little cartoon characters and trying to convince people on the internet to like them