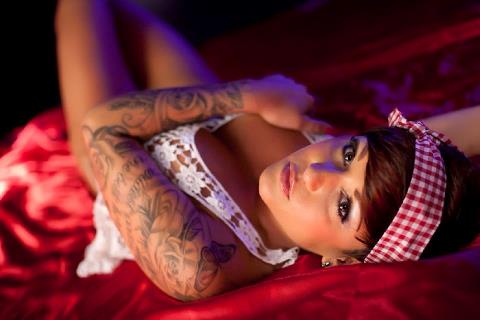 Happy in their colourful skin

It was a singular event that led Manchester student, Jess Townsend, to the tattooist’s chair. Profoundly affected by a speech at the city’s Pride event in 2011, she had a memorial piece inked on her forearm. The black and grey band is made up of entwined symbols representing the Roman goddess Venus, often used to represent femaleness.

Sitting in a tattooist’s chair in a studio, preparing to be inked, there is a combination of excitement and nerves. The colourful markings, the highlights and shading that can bring an image or design to life are works of art in themselves. But for many, as 19 year old Jess explains, they can be much more:

“I had it done as a memorial piece after an HIV/AIDS vigil at Manchester Pride in 2011. During the event, there was a speech about young LGBT people who had committed suicide as a result of bullying regarding their sexual orientation. It was the most inspiring speech I’d ever heard, and it reminded me of why I am, and should be, out and proud. My tattoo symbolises everything I went through as a victim of homophobic bullying and how close the LGBT community is. It’s also a kind of ‘fuck you’ to society. This is just who we are.”

Hopes, dreams, memories and even regrets can be captured in ink as a permanent reminder – like always having a diary or photo album in your pocket. Marking a belief with a tattoo is an overt show of dedication to a cause, support for an ideology or a way of life – perhaps a step further than paying your dues and subscribing to a quarterly pamphlet. What leads a person there is, of course, different for everyone.

It is perhaps not a surprise that around 40 years ago, tattooing was a still very much a male dominated practice

Historically, especially around the punk movement of the late 1970s, tattooing was employed as a way to distance oneself from a conservative, traditional lifestyle and rebel against social norms. Subcultural theory, from the ’70s to the present day, has touched on the ‘otherness’ of tattooing.

It is perhaps not a surprise that around 40 years ago, tattooing was a still very much a male dominated practice, with a few exceptions. In her book Bodies of Subversion – The Secret History of Women and Tattoo, Margot Mifflin documents the rise of women within the art form, as both canvas and artist. She touches on examples of circus ladies and wives of tattoo artists who later became their apprentices. In the early part of the 20th century, such women would have still been viewed publically as degenerate, loose and without morals. Mifflin also suggests that the sexual revolution of the 1960s was the positive catalyst for tattoos and tattooing to be “resurrected in the counterculture by women who were rethinking womanhood”.

Former model, Jenny Goulding, from Bolton, perhaps encapsulates the zeitgeist of feminism in reference to tattooing. Starting out as a beautiful but physically blank canvas, Jenny (34) started to feel that all the girls modelling at events and shoots with her had the same look and nothing set them apart:

“Everybody was blending into one. There was a look that everyone needed to have. I have always liked tattoos and had a few when I was younger. But when I finished modelling, I felt more and more that anyone can be beautiful. It’s not about the size 8/10 figure, it’s about people being confident in their own bodies.”

The pride in supporting what you believe in, so permanently, can be positive and empowering

Work on her intricate full sleeve is a long process, helped along by her cousin, Daniel Watson, who owns a studio in Bolton where Jenny also works as a semi-permanent makeup artist. Jenny adds:

“I don’t like to blend in and look like everyone else. I like to challenge people’s ideas of what a woman should be and look like. I think over time this will change even more. At the moment, you still have those who have a set idea that probably isn’t going to change. But there are tattoos everywhere now. I love the1950s vintage look, with the headscarves and pinned up hair. And with tattoos, it is beautiful and feminine.” Another Boltonian, Lisa Ince, is the proud parent of two daughters – seven year old Poppy and four year old Honey. Her tattoo is an image by Leah Moule of Birmingham, depicting a baby-wearing mother carrying her child on her back. Lisa says:

“And now my youngest daughter is four, that phase of parenting is coming to an end, so I wanted a large piece on my arm for a long time now, to commemorate this. It has taken a good few years to come up with a concept that has enough meaning. I couldn’t think of a better way to mark our babies growing up or my 30th birthday. I love it!”

Whether it’s an obvious design or something more coded, the pride in supporting what you believe in, so permanently, can be positive and empowering. For some, tattoos can be intensely personal and political at the same time. Shannon Humphreys, originally from New Jersey, lives in Southend-on-sea, Essex; she has a Darwin fish with her husband’s name, Jim, inside it, tattooed on her lower abdomen.

These women hope to spread their thoughts and ideas of their own world through their powerful, political ink

The fish is similar in style to the ichthys – the symbol of Christianity – but is right-facing with small legs. The work was done eight years ago by Shannon’s high school friend, Sean Amlie, in East Stroudsburg, Pennsylvania, US.

Shannon waited a long time for this, her first and currently only tattoo. She says:

“I wanted it to be something that would still hold meaning for me as I aged and my priorities in life changed. As a symbol for evolution, the Darwin fish serves as an emblem of my reliance in facts and science over faith and myth.”

A political tattoo, with a small ‘p’ of course, can spark discussion, encourage questions and help educate others about an alternative way of thinking about something. It is not always chosen to be different or shocking. It can form part of a personal movement.

For the majority of people, the days of DIY tattooing and seedy back street parlours are long gone (although these do still exist). Pictorial evidence of people drunkenly stumbling into a studio after a few drinks is now just the comical fodder of Facebook and Instagram. Today, tattooing is about specific designs with heavy discussion and tweaks – often with weeks between booking appointments and needle to skin. There’s pride in the art form and what it produces.

These women, along with many others, hope to spread their thoughts and ideas of their own worlds through powerful, political ink; as a by-product of this, they also hope to subvert other people’s opinions about tattooing. They are animated about their inkings and ideologies and, most importantly, happy in their own colourful skin.

The first image is of Jenny, reclining, with her tattoo sleeve on her left arm visible, used with permission from Jenny Goulding. The second image is of Lisa, wearing her baby on her back, a bright tattoo is visible on her upper arm; it was taken by Alison Barton-Simmons.

Alison Barton-Simmons is a former newspaper journalist from Bolton in North England. As a mother of two, she now works from home, running her own bespoke textiles business, Absolute Bobbins. When not sewing or writing, Alison has work done on her collection of tattoos and binge-watches TV box sets.