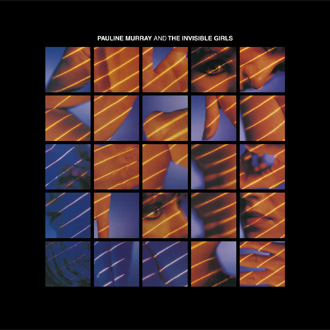 2014 was a bumper year for fabulous and diverse female-led music: Neneh Cherry’s solo comeback, the contemporary Afrobeat of Ibibio Sound Machine, Jane Weaver’s space-pop concept album The Silver Globe and the scintillating dark disco of LoneLady’s ‘Groove It Out’ all indicate that there was much to be thrilled about.

A further highlight slipped out in October, accompanied by minimal publicity. Given that it was a reissue of one of the great, lost records of British post-punk, led by ex-Penetration front-woman Pauline Murray, this is a crying shame. Originally released in 1980 on RSO, the commercial viability of Pauline Murray and the Invisible Girls was not helped by its record company going bust less than a year later. Home to the Bee Gees and blockbuster film soundtracks like Grease and Star Wars, it was an unlikely home for a new wave chanteuse, even before being sunk by an ill-fated film of Sgt Pepper’s Lonely Hearts Club Band and a punishing lawsuit from the brothers Gibb. Apart from a brief CD release in 1993, the album has been unavailable until now.

It may well be that the mega-hit reputation of RSO was one of its attractions for Murray and Penetration guitarist Robert Blamire, who she continued to work with after the County Durham pit village punk band split in 1979. Murray admits good-humouredly in the liner notes to the reissue that “RSO were so unfashionable… it sort of perversely appealed to me”. The pair were committed to a volte-face from the rockism of the final Penetration LP in favour of a sound inspired in equal parts by Lou Reed’s ‘Street Hassle’ and “a very airy sort of European pop”. The album does, in fact, occasionally bring to mind (if you can conceive of this) a post-punk Raymond Lefévre, the French easy listening composer who wrote the theme to BBC’s ‘Pebble Mill At One’.

In this, Murray and Blamire were way ahead of more well known New Pop strategists like Heaven 17 and Scritti Politti. They, therefore, avoided the ironic embrace of tacky glitz and business-like professionalism that arguably compromised such groups with its unintentional but uncomfortable Thatcherite overtones. Instead, the pair drew on the talent pool of Factory Records and the Manchester scene to construct their masterpiece of sophisticated, subversive sing-alongs. The album was produced by the legendary Martin Hannett of Joy Division fame. It featured contributions from punk poet John Cooper Clarke’s backing band, Vini Reilly of the Durutti Column, Bernard Sumner of Joy Division/New Order and drummer John Maher of the Buzzcocks, not to mention Wayne Hussey (later of goth diehards Sisters of Mercy).

However, the making of the album did not follow the more right-on democratic principles of peers like the Raincoats and Gang of Four. Eccentric, dictatorial Hannett characteristically took the reins, getting the band to work through the night as he had with Joy Division, while offering little in the way of feedback and sometimes nodding off in the control booth. For Murray, downcast after the breakup of Penetration and heading for a separation with her husband, it was a difficult time. And with Joy Division singer Ian Curtis’ suicide having occurred just two months before, a ‘strange vibe’ accompanied the recordings.

The record, though, was a triumph. Rather than the superficial brightness of early 1980s pop, it merged post-punk studio experiments and the gloomy, atmospheric glamour of Factory with melodic nous and consummately structured songwriting. Murray sees it as “a bit of a missing link” and this is represented visually by a sleeve design by Peter Saville that’s both impeccably Factory in its crisp modernism and proto-New Pop in the exquisitely androgynous portraits of Murray. Sadly, this in-betweenness was perhaps why the album only made number 35 in the charts (still respectable to be fair), despite rave reviews from then taste-making weeklies like NME and Sounds. There’s no doubt that this was a visionary record, which anticipated the chart music of the subsequent decade and occasionally even the mid-’80s indie reaction to it. But for its lush layers, the breathy, jangling major-key ‘Dream Sequence’ could be a Creation or Sarah Records single. Meanwhile, Pauline’s charming faux-naïf image in a performance of the song for Granada TV’s Fun Factory – mussed-up hair, baggy white t-shirt and pyjama bottoms – must surely have been a folk-memory reference point for later followers of all things twee.

As well as its perfectly pitched aesthetics, the lyrics of the album are a particular strongpoint. Opener ‘Screaming in the Darkness’ seems to capture not only Murray’s feelings of unease and uncertainty, but the mood of a Britain plunged into the early days of a Conservative reign, whose slash and burn policies would fundamentally alter the life of the country up to the present day. Alienation and the inadequacy of individualist pull-yourself-up-by-your-bootstraps rhetoric are succinctly expressed in the lines: “I asked a stranger what to do/and all she said ‘it’s up to you'”. There’s meta-pop commentary on ‘Shoot You Down’ (possibly directed at some of the more callous music press reactions to Penetration’s musical direction) and a tenderly empathetic critique of traditional masculinity in ‘Drummer Boy’. The glittering, upbeat accompaniment to ‘When Will We Learn’ gives the lie to its grim intimations of environmental disaster and the simultaneous potential for apathy and hubris on the part of humanity. Meanwhile, funk-noir synth-pop single ‘Mr X’, foreshadows the Associates’ ‘Club Country’ in the way it musically inhabits New Romantic territory while lyrically puncturing the vapid ambition of that scene. It’s not all long grey macs of doom, though. In the bedtime visions of ‘Dream Sequence’ and the yearning ‘Searching For Heaven’, you can sense the thinning but still twinkling thread of utopianism that runs through counter-cultural rock to post-punk in metaphors which evoke something imaginable, if not quite real.

In fact, the whole thing feels like one more unearthed example of a recognisable strand of post-punk, one that’s minimised in existing history, yet is a vital part of the story; it’s an idiosyncratic, questing engagement with the world that builds on traditions of working class autodidact culture. Like the work of The Fall, for instance, Pauline Murray and the Invisible Girls disturbs the simplistic historical division of punk’s multiple trajectories into a populist but primitive urchin camp and arty, cloistered middle-class refinement. This kind of material truly makes good on the original promise of punk: to give a public voice to those with something interesting, off-beat and critical to say who might otherwise never have been heard.

Murray and Blamire were rightly proud of the album, performing it live to a sold-out tour and glowing press feedback. Knowing that it deserved a re-release after RSO collapsed, but lacking the resources or opportunities to do so properly, the pair sat on the master tapes for years. Luckily, they were approached in March last year by James Nice, author of the superb history of Factory, Shadowplayers, and founder of LTM Records, a labour of love reissue label that has also put out post-punk gems by bands including the Blue Orchids, Ludus and The Passage. Nice worked for Factory’s Belgian sister label Les Disques du Crépuscule in the 1980s and has recently resurrected it as an imprint of LTM. It is Crépuscule’s distinctive logo that adorns the reissued, beautifully assembled Pauline Murray and the Invisible Girls, thus giving it perhaps its most appropriate fate: a Factory release of sorts. For myself, a native of Stockport, I’m grateful that there is now one more classic album to think of each time I walk past Strawberry Studios.

The image at the top of this piece is the cover for the reissued album Pauline Murray and the Invisible Girls. On a black background, a large square composed of 25 smaller, equally sized squares fills most of the front cover. Within the squares, snatched images of a model’s face are shown, such as lips, eyes and hands. The images are predominantly purple and orange, with the reflection of light captured through venetian blinds cast over many of the images.

David Wilkinson is the author of a forthcoming book on British post-punk, feminism and left wing politics. He covets Pauline’s style in the monochrome photos on the back of the liner notes