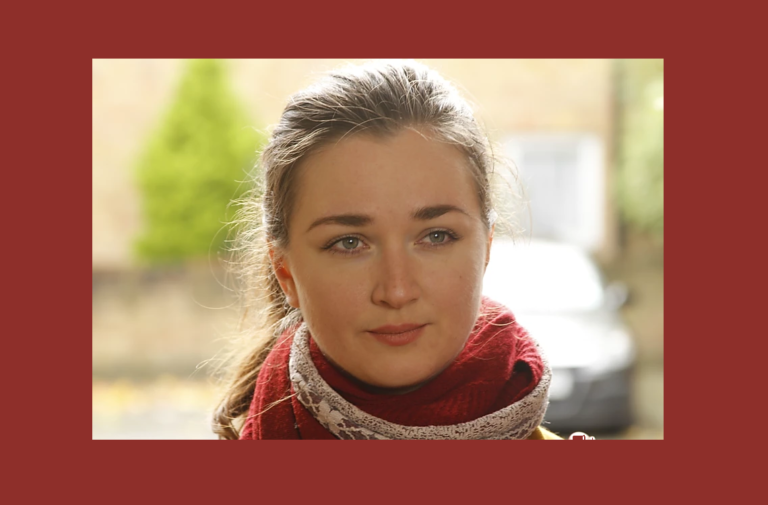 Tea Set is a short one-woman play written by Gina Moxley. It’s about a young woman who is employed by a family to keep their elderly parent company over the New Year’s Eve of the millennium while they jet off to the Caribbean. It’s narrated in the first person by Amy Molloy who plays the young woman, mostly in a series of flashbacks to the recent past. I saw one of two performances at the White Bear Theatre in Kennington in London; it will be performed again at the Baron’s Court Theatre this month. Molloy, the only cast member, has co-produced the piece with Kibo Productions.

It’s always hard to create a lot of dynamism in a one-woman show. Much of the texture in a play can come from the dialogue and from different combinations of characters; when one person’s voice needs to carry nearly the whole thing, it often becomes difficult to create light and shade. This is particularly true in a very serious play like this where there are many darker themes – loneliness, violence, suicide, mental health issues – as there are very few opportunities for lighter moments to create change. Moxley has done very well with this challenge: within the script Molloy occasionally slips into the character of the elderly woman which provides a nice bit of contrast, and even within the key emotions of sadness, anger and despair, there’s plenty of nuance. In a perfect world, however, I would have liked to see a bit more of the supporting characters to create even more variation.

Moxley’s script in general is very good. The Young Woman’s character is finely drawn, the writing is detailed and there are lots of delicate turns of phrases; writing about a character’s Church of England voice and the small tinkle of a cup being broken are moments that stick in my mind. Overall the use of language is lovely.

This is a play almost entirely about women: women who are on the edges of society, who feel out of place and unwanted, or who want to withdraw

The play, which is only about 45 minutes in duration, whips by satisfactorily. Lots of really big themes are explored; I found the focus on smaller, domestic sadnesses and disappointments more believable and compelling than a couple of the more dramatic turns of the plot. In particular, there was a twist at the end which, for me, sat awkwardly with the rest of the piece. Moxley’s writing is really truthful when writing about a character’s personal experience of sadness, but a little less effective when writing about moments of extreme and unusual violence. However, I always felt that the Young Woman was a real person, rather than a character created only to put over a particular view or political point.

Amy Molloy really makes the most of the script with a terrific performance. She is by turns furious, distraught, and tautly watchful, with every moment conveyed with real truthfulness. It’s a small thing but she executes the accents of the various supporting characters, particularly that of the elderly woman, with impressive and unusual ease. It’s a very committed performance and she really held my attention, again a difficult thing to do with a one-person show.

The design of the piece is very simple. There’s just a chair, table and very few simple props. For much of the action, Molloy is sat at the table and I wondered if there might have been ways for the director, Sharon Willems, to bring a bit more change and movement to the piece. Even sitting at a different angle to the table to indicate sitting in different rooms might have been enough.

That aside, Willems has directed the play very effectively. Changes of scene are indicated with simple lighting changes and original music from Mari Sainio. The play is simply and cleanly done; there’s no director’s pretension here or any unnecessary and extraneous actions or words.

There was one piece of simple imagery in the piece that I really loved. Throughout much of the play, the Young Woman is trying to mend a broken cup with glue that is never really going to be up to the job, although she never gives up. This was a lovely metaphor for trying to fix broken lives with inadequate tools and was somewhat frustrating to watch and experience. It was one of my favourite aspects of the performance.

This is a play almost entirely about women: women who are on the edges of society, who feel out of place and unwanted, or who want to withdraw. It’s also an almost entirely female-led team which was really great to see. I hope that young truthful companies like this continue to thrive and will, in future years, diversify the leaders of our major cultural institutions.

Tea Set is a small, truthful play that’s not afraid to tackle big ideas. Although I’m not often a fan of one-person shows, particularly those that are about very serious subjects, the piece’s cast and creative team really won me over. I look forward to seeing more work from them all.

Tea Set will be showing 19 to 25 January 2015 at Barons Court Theatre in London as one of three new plays being performed as part of Resolutions: Plays for a New Year.

The image shows a young white woman’s face as she looks distantly into a spot beyond the camera. Her hair is pulled back and she wears a red and white scarf. The background is very blurred but a car and a tree can be made out. The picture has a red border.